Blockchain-based digital currencies can do things that no other form of money can.

The Central Bank of The Bahamas has announced "Project Sand Dollar," a pilot program for its upcoming blockchain-based central bank digital currency.

What digital currency does that electronic bank transfers can't

The main purpose of Project Sand Dollar is to modernise and streamline the archipelago's financial system, with the benefits of greatly reducing costs and improving financial inclusion among communities throughout The Bahamas.

"The Central Bank expects that at the conclusion of this project all residents in The Bahamas will have equal, expanded access to modernised digital payments capabilities. A concurrent reduction in cash transactions is also expected. The evolved Bahamian payments infrastructure should reduce service delivery costs, increase transactional efficiency and improve the overall level of financial inclusion in communities throughout the archipelago," the Central Bank explains.

The efforts are primarily aimed at The Bahamas' outlying "family islands," which have suffered from a decline in banking services in recent years. 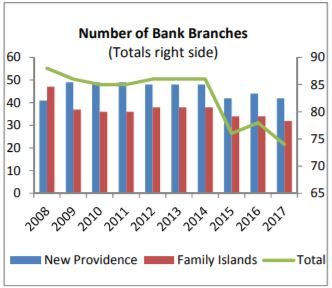 This is partly because heightened anti-money laundering and know your customer (AML/KYC) concerns in recent years mean it has become more expensive for commercial banks to maintain branches in The Bahamas, and partly because the tides of digitisation are seeing fewer people go into branches.

With both these factors coming at the same time, you have situations where bank branches can be profitable one year but very unprofitable the next, hence the abrupt spate of closures.

The problem is that branch closures didn't see people switch to electronic bank transfers as quickly as hoped.

In fact, by some measures it had the exact opposite effect, reversing the decline of cash.

This growing popularity of physical cash potentially increases the risk of money laundering on the island, while also posing incredible costs. The Bahamas consists of over 700 islands across almost 500,000 square kilometres of ocean, but only has a population of around 400,000. Actually physically moving money around the islands is very expensive and very unrewarding compared to other places.

Use of electronic payments was growing, but it wasn't moving fast enough and was leaving some considerable gaps. Furthermore, when given the choice between inconvenient, expensive cheques and cheap, easy electronic payments, many people are actually choosing cheques. Clearly something is missing.

Why digital cash is king

This preference persisted even when electronic payments were available, and the central bank identified many interconnected reasons for the ongoing use of cash and cheques.

These reasons feed into each other and give both payers and payees more reasons to keep using and accepting antiquated cash and cheque, which keeps The Bahamas' financial system less efficient and inclusive, as well as more expensive and opaque.

The solution needs to address all of these reasons simultaneously. Digitising money as a way of sharply reducing the cost and time taken for bank transfers is one of the necessary cornerstones for The Bahamas to modernise its economy. It's joined by other moving parts.

The envisioned solution is a combination of central bank digital currency, a national identity system and the rollout of suitable point-of-sale systems to all businesses in The Bahamas to essentially make the "Sand Dollar" universally available.

The currency itself will most likely be blockchain-based, with the central bank announcing NZIA Limited as its technology partner for the project. NZIA is described as combining the expertise of the Zynesis blockchain R&D lab and consultancy and IBM which has made enormous strides in its own Stellar blockchain-based payment network.

To better facilitate uptake and let people put their digital dollars in the bank, The Bahamas has also started working on what might be described as "lite" due diligence for basic depository services which better suits The Bahamas' domestic circumstances while still remaining consistent with AML/KYC obligations. Specifically, it de-emphasises documented proof of address and photo identification in favour of more flexible options like third-party references and taking down multiple methods of contacting people.

A glimpse of the near future

The question of whether fiat currencies and decentralised cryptocurrencies will co-exist in the future, or if one will eat the other, has not been convincingly answered yet. The Sand Dollar's design makes some very interesting points in favour of coexistence though, and strongly suggests that public networks will be the medium of choice for more digital currencies.

First, Zynesis's area of expertise is public, decentralised blockchains rather than private networks. And while IBM has been swimming in the design of both public and private blockchains, its "World Wire" blockchain payment system is based on the public Stellar blockchain.

The central bank has also described inter-operability of the Sand Dollar's network with other payment channels as a priority, so by all appearances, the Bahamian digital dollar is geared towards public network use.

Second, the Sand Dollar will be closely tied to identity solutions which themselves are well-suited to public blockchains. Blockchain-based mobile identity solutions are already being used in The Bahamas in lieu of traditional documentation.

Third, in the lead-up to the Sand Dollar's release, the Bahamian central bank pushed through "Payments Instruments Oversight Regulations 2017," the regulations that essentially describe how to carry out and accept digital currency payments in The Bahamas. These regulations were deliberately kept broad enough to simultaneously cover the digital Bahamian dollar and cryptocurrencies like bitcoin.

As the central bank said regarding this choice: "the public's sensitivity to what they consider as high bank and government fees has resulted in the heightened dialogue in the regulatory and private sphere on quality service and innovative products and services."

In other words, some additional consumer choice in currencies might be very beneficial.

You could even say any currency without competition from alternatives is monopoly money.

Other countries such as New Zealand are leaning towards similar trains of thought. But in this case, it's worth noting that the Bahamian dollar is pegged to the US dollar anyway, so it probably has much less to fear from alternative currencies than most other countries.

Further details on the Sand Dollar, including which family islands it's going to be piloted on, are expected in the coming weeks.