People are more enthusiastic about Bitcoin in almost every way now than in October 2017.

A recent survey conducted online by The Harris Poll, on behalf of Blockchain Capital, found that across the board, every age group was more aware of and positive towards Bitcoin than they were in October 2017.

Notably, this growing enthusiasm comes in the wake of a 75% or so price drop, while the previous survey was conducted during the most bullish period of Bitcoin's history. Both surveys asked identical questions, except the more recent one added a few more.

People describe themselves as more likely to purchase Bitcoin sometime in the next five years than previously.

While this trend held true across all age groups, the youngest 18-34 age range remains the most likely and saw one of the largest changes since 2017.

It's interesting to note that the 35-44 age group was actually more likely to buy in October 2017 than the younger demographic was, and that the group saw the smallest growth in enthusiasm since then.

When considered next to some of the other results, it looks like this is because the 35-44 age group was ahead of the curve on awareness and had already largely made up its mind on whether it would be buying Bitcoin.

Tell me more about this... Bitcoin

Bitcoin awareness is naturally a lot higher now than it was before, and is much more uniformly distributed than it used to be, at around 90%. Maybe that's a plateau of sorts. 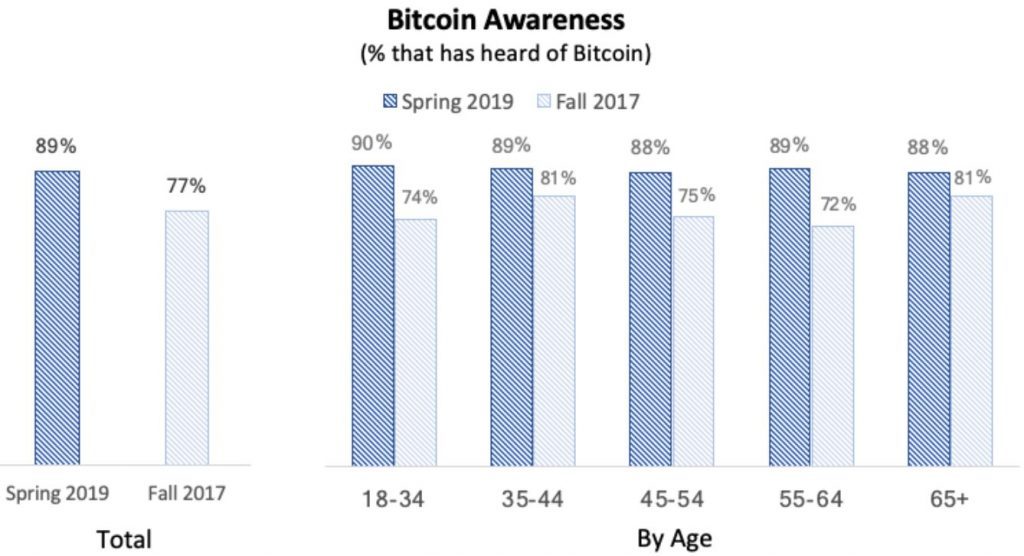 Awareness among the 35-44 age group in 2017 was significantly ahead of the others and was matched only by the 65+ age group.

But there's a big difference between having heard of Bitcoin and actually being familiar with it. Age 65+ respondents were the least familiar with Bitcoin, while age 35-44 once again ended up a bit ahead of the curve. 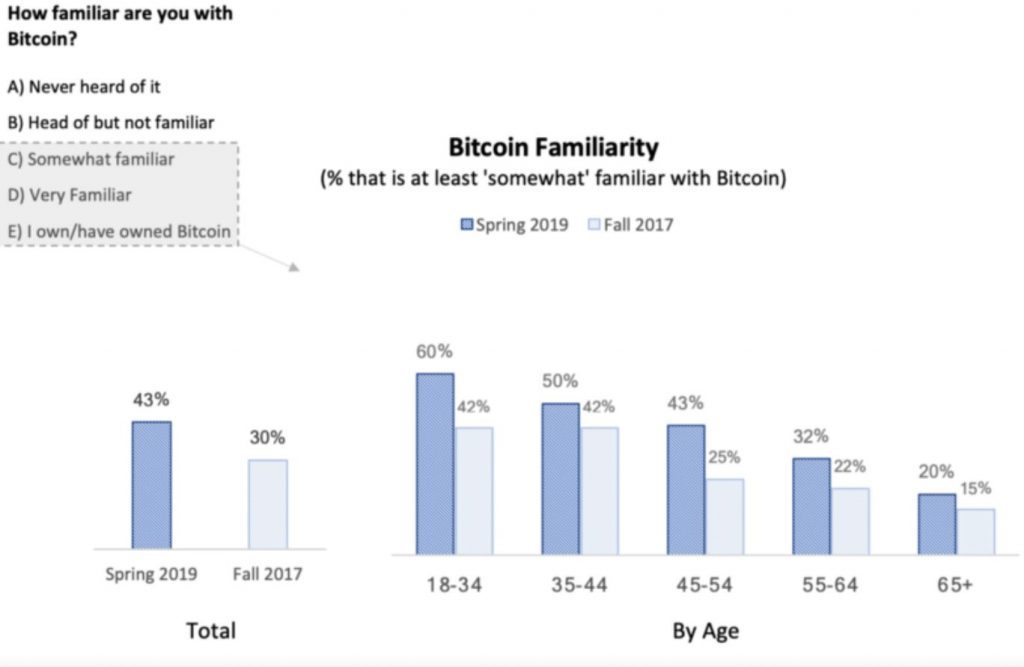 Overall familiarity with Bitcoin rose from 30% near the bullish peak to 43% now. It's also settled into a much more expected age pattern. Back in October 2017, you basically had the same results among the age groups of 18 to 44 and 45 to 64. Now each demographic is diverging a lot more.

According to the survey, 60% of 18-34s now describe themselves as being at least somewhat familiar with Bitcoin, although a lot of people could probably volunteer a lot of anecdotal evidence to the contrary.

On the whole, more respondents think Bitcoin is a positive innovation in financial technology now than in 2017. Although the only step backwards in the survey results was also from this question. 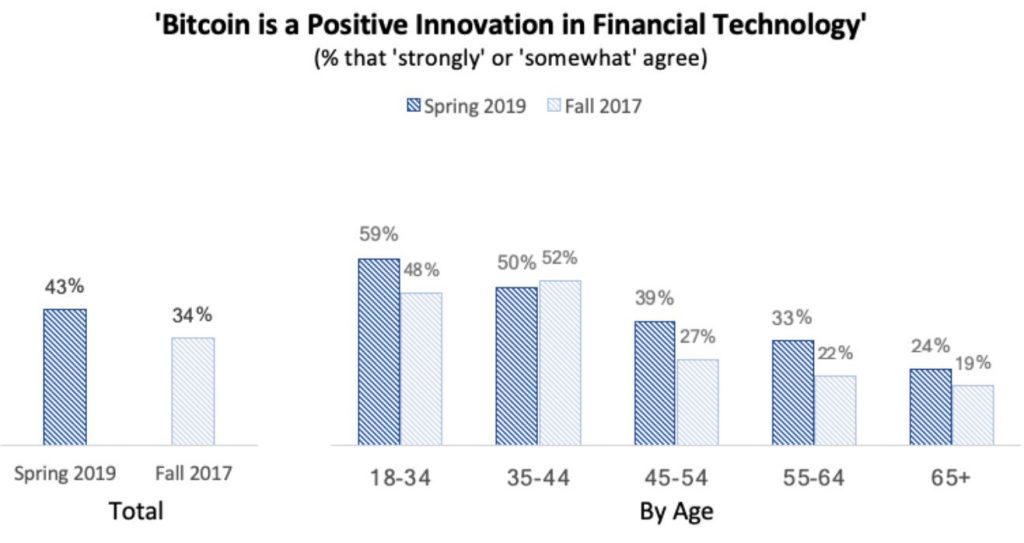 The 35-44 age group is less likely to describe Bitcoin as a positive financial innovation now than they were in 2017.

Based on that age group being comparatively well informed comparatively early, there are two potential reasons why they'd actually be less optimistic about Bitcoin now than they used to be.

It's also fascinating that there's such a generational difference in people's opinions of whether Bitcoin is a positive innovation in financial technology. You'd think this would be largely independent of age, but instead it clearly tracks right along with age.

It's also worth considering these results next to the general awareness statistics for a sense of how media coverage may be shaping the opinions of people who are not familiar with Bitcoin, but still have an opinion on whether it's a good thing.

There's a very close match between the number of respondents in each age group who describe themselves as familiar with Bitcoin, and the number who believe it's a positive innovation in financial technology. The 65+ age group stands out here, as the only demographic where more people have formed an opinion on Bitcoin than are even somewhat familiar with it.

When asked how they feel about the statement "it's likely that most people will be using Bitcoin in the next 10 years," more people in every age group were more likely to say they "strongly" or "somewhat" agree now than they were in October 2017.

While other surveys have made it fairly clear that opinions of blockchain technology improved a lot of 2018, this survey shows that the same happened for Bitcoin. No matter how you slice it, the average person on the street is now a lot more optimistic and serious about Bitcoin than they were in the bubbly mania of late 2017.

This solidly undermines the argument that people will lose interest in Bitcoin after the price crashes. It also shows that despite everyone's best efforts, people stubbornly insist on seeing Bitcoin as a practical technology and valuable financial innovation rather than a get-rich-quick scheme.

However, the number of people who agreed with the statement that most people will use Bitcoin was lower than the general awareness statistics, suggesting that quite a lot of people are in the so-called "blockchain not Bitcoin" boat, or that they're not especially impressed with the grandfather of crypto.

Either way, Bitcoin has very clearly weathered the crash with aplomb.