Happy international "don't believe anything you read on the Internet" day

Did you know April Fools' Day was created by Hallmark just to bolster sales for a series of otherwise underwhelming pop-out greeting cards?

That factoid may or may not be true, just like all the cryptocurrency-related April Fools' Day jokes which permeated the cryptosphere today.

Here are the best of the bunch, arranged in no particular order but all selected because they hold up a slightly unsettling mirror to the real world – as all the best jokes usually do.

The world of privacy-oriented cryptocurrencies beginning with the letter "Z" is a highly competitive field in the crypto industry, with Zcoin, Zcash and the coin formerly known as ZenCash all vying for the exact same tiny slice of a tiny industry.

To stand out from each other, each has implemented various technical points of differentiation that are kind of complicated.

Now, on 1 April, Zcoin has announced that in keeping with its goal of being the world's foremost anonymity-oriented cryptocurrency, it will rebrand as a project with no branding and no name, complete with a brand new logo (pictured).

"We feel like this move will be warmly embraced by our millennial users, who don't like being labeled," the website says. "At the moment the new logo is just a white box, but we’re working on a transparent version and with further research, we believe that we can soon have no logo whatsoever."

"It's simple but ingenious. How can you track something that can't even be mentioned?" said Reuben Yap, COO of that project.

"There have been some challenges," conceded operations manager Sebastian M. "I still can’t find our new nameless website, but I think this just goes to show how effective this change has been."

"Not only does the rebranding increase privacy, it also increases our brand exposure as everyone not wearing a brand is now promoting our project. Through this decentralised marketing initiative, our merchandise is now available in shops all over the world," the website says.

"The idea of having no name originated from deep within our community. We reached out for new rebranding ideas, and when some of our more active and opinionated members didn't reply, we quickly realised that they had stumbled on something truly great."

It could make you laugh until you cry.

This "middle-of-the-line miner" won't change anything, the Antminer website proudly announces. It "packs a third of the electricity efficiency of its predecessor, and delivers a 100 per cent reduction in hashing power," the website crows. "The Antminer-Less really shows that bigger is better, and will take pride of place in a miner's rig – as it cannot be easily transported."

The decision to pivot away from ASIC miners and to focus instead on GPU miners was inspired by some random people on the Internet, it explains.

"This new GPU hardware is by far the leading model by performance to mine cryptocurrencies in a slow and steady pace – freeing up time for miners to engage in arguments with strangers on the Internet. Bitmain understands the value of these anonymous discussions because the decision to shift gears and focus on GPU mining was made under the guidance of strongly-worded comments by unknown advisors online. The arguments that were made were incredibly compelling, erudite and well-articulated, convincing us to totally change our business plan."

One of the biggest advantages of the Antminer-Less, Bitmain says, is that it can be used for multiple things.

"The logic of this reasoning can be seen with the timelessness of inventions like the Teasmade: a kettle and alarm clock in one device. It is for that reason, too, that clothes are frequently washed in dishwashers, and books are stored in freezers. A device is useless if it fulfils only one function," it says. "Coming soon to a brick-and-mortar store near you!"

MyEtherWallet (MEW) is one of the world's most popular Ethereum wallets, with countless users – but it doesn't really know them.

Honestly, it sometimes feels like people are just using MEW for its clean user interface, proven security track record, solid hardware wallet compatibility and full degree of Ethereum-related functionality rather than because they actually like it.

"What users do off the platform is their business. We just want to get to know them really well on an intimate level. We're quite lonely," said MEW COO Brian Norton.

Obviously there's no better way to get to know someone than to implement "know your customer" (KYC) measures. It's right there in the name. And that's why you can now find a MEW KYC agreement on the website. 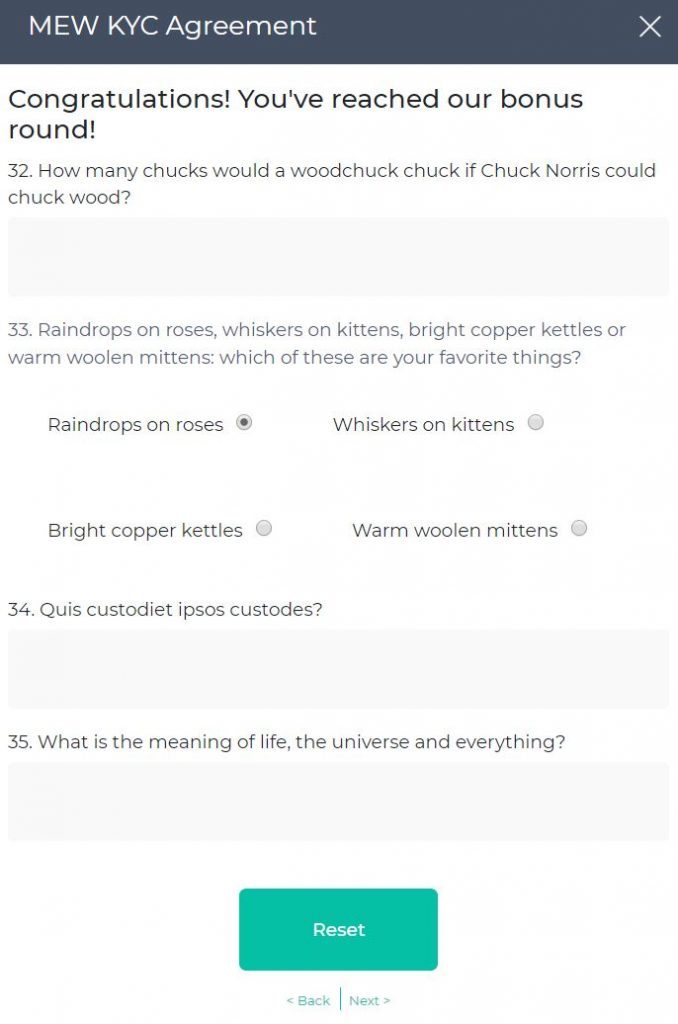 "At MEW, we’re really proud of the community we’ve built and wanted to show our thanks to our users by getting personal. Really, really personal. By asking an extensive and exhaustive list of personal questions, we can be confident that our users' data will be kept safely centralised with our service," said MEW CEO Kosala Hemachandra.

Among many, many other things, you'll be asked the exact latitude and longitude of the location you first discovered crypto, to rate your AML/KYC experience with one of several emojis, whether you believe in llamacorns, whether a tree makes a sound if it falls in the forest and no one's there to hear it, to be or not to be, how you'd prove to yourself that you're yourself if you had to convince yourself that you were you in the event of a time travel paradox and quis custodiet ipsos custodes (who watches the watchmen).

By filling out the form, you consent to having your data tattooed on the COO, arranged in a scrapbook, baked into a cake, placed into decorative boxes for discovery by future generations and ignored entirely.

The SEC has approved both the Bitwise Asset Management and VanEck Bitcoin ETFs, just days after the most recent denials, FinanceMagnates reports, causing the price of Bitcoin to jump above $6,000.

Tron CEO Justin Sun announced that he would be giving away a Tesla to one lucky winner out of everyone who retweets and follows him on Twitter.

The final draw came down to 88 people, but when the time came, he pranked everyone by first picking a bot, then picking the same account 87 times. When there was eventually going to be a winner, he ended up pulling away the car and replacing it with a free ticket to a Tron expo.

This brilliant prank actually happened on 27 March instead of 1 April.