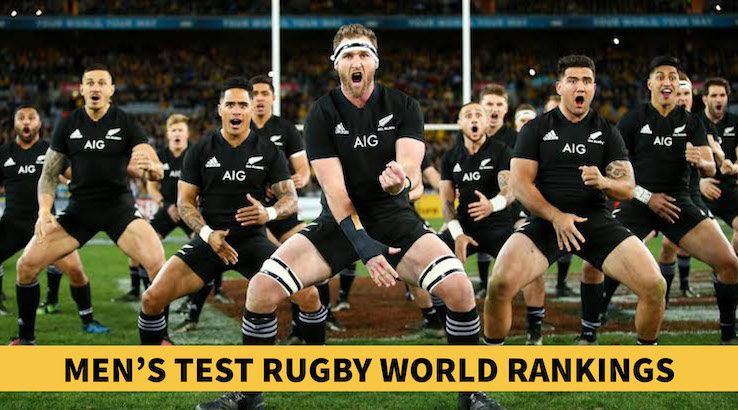 The 2019 Rugby World Cup will decide the best nation on Earth, so who are the contenders and what are the test rugby world rankings?

Update: The test rugby world rankings were updated by the IRB on 30 September.

The 2019 Rugby World Cup will be played in Japan and it begins on 20 September, 2019. Are you wondering who has a genuine chance of taking home the trophy? Below you will find a preview of all the key teams here for you. For a quick snapshot of the top 25 ranked international rugby union nations jump ahead to our Test Rugby World Rankings table.

Also, if you want to ensure you don't miss a minute of action from the competition, Kayo Sports is broadcasting every single game live and on-demand. Plus, there's plenty of other classic matches, pre and post shows and press conference content, top. You can try it for 14-days free. If Kayo doesn't float your boat there are some other options are available you can consider. Read all about it in our dedicated where to watch the 2019 Rugby World Cup guide.

For a full table of every fixture, check out the Rugby World Cup schedule.

Contender: Ireland
Ireland enter the tournament after a whirlwind two years of success. The team has experienced extreme highs and secured the world number 1 ranking for the first time. In 2018 the Irish shocked the world with some incredible results, with the small European nation achieving a Six Nations win and defeating New Zealand. Huge highlights for the nation.

That said, some mixed form has affected them this year as they failed to defend the Six Nations. Plus, in Ireland's warm-up match ahead of the World Cup, the side was annihilated by England. The Irish did then proceed to defeat Wales in two straight games, yet history is also against Ireland. The Irish have a habit of failing to meet expectations during the World Cup.

The All Blacks lost the number 1 test rugby world ranking on the eve of the World Cup to Ireland. However, New Zealand has taken out the previous two World Cups and are the favourites again this time round. The All Blacks will be the team to watch throughout the contest, but its most recent form leaves a glimmer of hope for competitors.

In its two previous games, the All Blacks beat Tonga 92-7 and Australia 33-0. Though, if we go back to August, Australia shocked all and recorded the largest ever score against New Zealand, 47-26. There was also a late escape against Argentina.

Contender: South Africa is also expected to cruise into the quarter-finals from Pool B. The Springbock's should be the only other contender with the All Blacks in that pool. The Springboks are fresh off winning the Rugby Championship and look to be in good shape.

Interestingly, South Africa haven't played as frequently as other teams during the lead-up to the 2019 Rugby World Cup. A win against Argentina and a virtual training gallop against Japan are the side's only pre-tournament tune-ups. The opening contest of its pool schedule is South Africa vs New Zealand, where we will gain a true guide to each side's contender status.

The English have had a notably strong build-up to the tournament, winning three of their last four matches. A narrow loss to Wales should only register as a slight disappointment given the fact the side won convincingly against the Welsh just a week beforehand. In England's final warm-up match, the Poms smashed Italy.

The most ominous sign England could win the 2019 Rugby World Cup came from the 57-15 hiding it recently gave world number 1 Ireland. Right now the team looks very strong, but England has a history of looking the goods before mailing in a string of bad games when the action gets serious. Put simply, it's a habit England will have to break to win a second ever title

Other contenders: France and Argentina

Pool C has been termed the "pool of death" and should give fans the most hotly contested games in the group stage of the 2019 Rugby World Cup. Three sides are in the top 11 of the Test Rugby World Rankings. France and Argentina are the two most likely teams who will be battling it out with England for the two spots in the knockout stages.

France emerged victorious in two of its last three games, but none of them were against international rugby union heavyweights. The timing of the French domestic competition also prevents the national team having as long a preparation as other countries.

Argentina played pretty well during the Rugby Championship, which was the primary preparation the Pumas had for the 2019 Rugby World Cup. Apart from that, they played Sydney club side Randwick, who were comprehensively beaten by the South Americans 74-0.

A mixed bag of results for the Wallabies during the build-up to the 2019 Rugby World Cup. It began with a record-breaking win against the All Blacks, before the New Zealand side beat the Wallabies 33-0 in response. The Aussies finished up with a mediocre result against minnows Samoa.

Australia's resume in previous years doesn't paint a positive picture, either. Neither does a sixth place in the Test Rugby World Rankings.

Wales enter the 2019 Rugby World Cup winning just once in its previous four matches. Albeit, the team's narrow losses were against two teams above them in the Test Rugby World Rankings. The Welsh will know if they want to be considered a true contender for the trophy, then those are the kind of matches they have to be able to win.

It'll be a huge clash when Wales play Australia. It's fifth vs sixth in the Test Rugby World Rankings. Plus, the winner of this encounter is likely to top the pool, which could mean avoiding a quarter-final clash with England.

Update: The IRB updated test rankings on 30 October during the RWC.

Matches during the RWC are worth double points to stress the significance of the tournament, which is why the rankings are affected so much.