5 biggest takeaways from the 2019 FinTech Summit 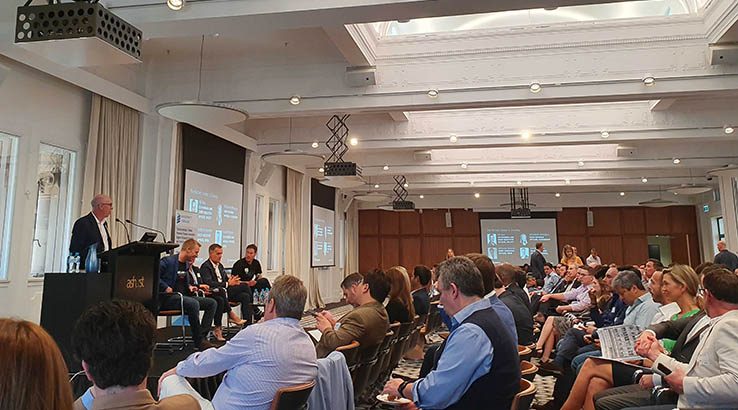 This year's FinTech Summit, held in Sydney on Thursday, was dominated by two clear trends: banking and open banking, with a splash of buy now, pay later. The opening and closing keynotes set the theme for the day with the CEOs from two of Australia's newest banks taking the stage. The subject of open banking, due to start in Australia in February 2020 as the first iteration of the Consumer Data Right, also found its way into panel discussions. Also on the agenda were partnerships, the growth of the fintech sector and buy now, pay later.

The new banks know it's not all about them

The FinTech Summit saw keynote presentations from two of Australia's new digital banks: 86 400 and Volt Bank. Both of these banks will allow customers to import banking data from other banks and see it in their banking app.

Speaking about this innovation, CEO and co-founder of Volt Bank Steve Weston said the feature was designed with customer inertia in mind.

"So most of us will not switch banks at any time in our lives, because we've got payment records set up and it's just a pain, so we just stick with what we have," Weston said.

"Most of us will be multi banked, you have a credit card with this bank and a transaction here and a mortgage there and a superannuation fund somewhere else," he said. "You'll be able to see all of those accounts through the Volt Bank app."

Volt is also working on the capability for customers to be able to see interest rates that have been paid on deposits and charged on loans.

86 400 also allows customers to see an updated view of their transactions across their accounts in the app, including a total cash position. CEO Robert Bell told the summit audience that the reality was, Australia didn't need another bank.

Bell sees 86 400 as solving how complex banking has become for people, and being able to pull in transactions from other accounts is a key component to this.

Don't partner because it looks good on LinkedIn

In a session on innovation and partnership, founder and CEO of fintech Douugh Andy Taylor and chief digital officer of Regional Australia Bank Rob Hale appeared on a panel to talk about their partnership via a Banking-as-a-Service (BaaS) model. Discussing what makes a successful partnership, Hale cautioned the majority fintech audience of jumping into a partnership without proper consideration.

"Partnering, yes, you can have a lot of fun. But there's some serious business at stake here. Particularly when you're dealing with entrepreneurial fintechs who put their life and every fibre of their being into their business," he said.

"It's not something that existing established organisations like Regional Australia can take lightly. So when you're choosing your partner, partner for all the good reasons: partner because you see the shared value, the shared success, and the outcomes. Don't partner because it looks good on LinkedIn."

According to Hale, a good partnership, which he believes has been firmly established between Douugh and Regional Australia Bank, is about finding where each party can add value.

A digital banking association may be on the horizon

Speaking on a panel about the growth of the fintech sector, co-founder and general counsel of Xinja Bank David Nichols talked about the possibility of joining the Australian Banking Association (ABA).

Nichols said he would like to have other digital banks in the association such as Volt and Douugh, with the intent being to deliver on the shared outcomes of the digital banking industry.

"We can all help each other out to meet those outcomes," he said.

Buy now, pay later and digital banking are two of Australian fintech's most-watched sectors, and so there were representatives from both sectors on a panel discussing fintech growth. For chief revenue officer of Flexigroup Elizabeth Minogue, which recently relaunched its buy now, pay later product, growth is "absolutely" coming from changing consumer behaviours.

"If you understand their thought patterns and process and changing needs, you can easily win," said Minogue, who believes this applies from Gen Z all the way up to retirement age.

"And that then is just underpinned by the technology that allows you to bring that to life."

David Nichols of Xinja Bank said the growth of digital banking in Australia and Xinja's growing customer base isn't even about banking at all.

"It's more about customer behaviours and bringing that humanity back to banking," he said. "It's less about transactional and more about the person behind that."

Not all fintechs are waiting for open banking

Open banking and open data had a dedicated panel with Tim Brookes, partner at Ashurst, James Poon, head of product and international at Raiz Invest, Fred Schebesta, co-founder and CEO at Finder and moderated by Sarah Day, senior manager of customer success at Envestnet Yodlee and director of FinTech Queensland.

Poon from Raiz said the company had been quite vocal about its position on open banking.

"We use different technology in terms of how we're getting our round-up information," he said. "What we're using now works for us."

Schebesta agreed, saying that you don't have to wait to launch something and that Finder is taking a similar route now with the soon-to-launch Finder app. However, he said that the data will be worth taking a look at.

"[The government] wants the customer to get a better deal," he said. "Two in five Australians never switch their bank account in their entire life, at all. That's the kind of stat we're dealing with."