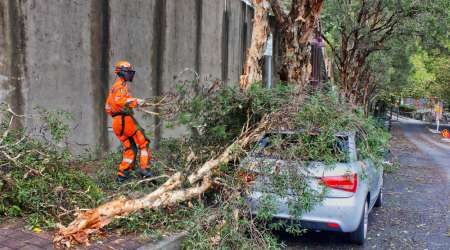 There are complex legal and insurance issues after wild weather, as the University of Queensland's Justine Bell-James explains.

Eastern Australia's wild weather has left coastal homes teetering on the brink of collapse, and has eroded beaches by up to 50m in parts of Sydney.

Now the attention turns to the clean-up. There are several legal issues for owners of damaged properties, particularly the question of if and how they can be compensated.

While the recent events cannot be attributed directly to climate change, they are certainly consistent with a warming world. Our institutions are ill-prepared for a potential increase in the frequency and severity of such events.

Unfortunately, the success of insurance claims for damaged homes in Sydney will depend entirely on the terms of their policies. Some policies don't cover erosion at all. Some policies only cover it if it occurs within a certain proximity of another insured event (for example, within 48 hours of a named storm event). Some policies also comprehensively exclude coverage for damage caused by actions of the sea.

Under the traditional law doctrine, where land is lost to erosion, the Crown automatically gains title to the inundated land, without any obligation to pay compensation. So even if a home-owner is insured, they may find themselves with no land to rebuild on.

Another potential avenue for home-owners to pursue is proceedings against the relevant local government for negligent approval of development. The success of this type of proceeding is highly speculative – much will hinge upon when the development was approved and how much information on the coastal hazards was available at that time.

Where development was approved decades ago, it may be difficult to prove that a local government was negligent, because of the limited state of knowledge at the time. In the case of more recent development approvals, there may be an argument that a local government had a high level of knowledge of the risk and control of risk information. These are the type of factors a court will look at in assessing negligence.

On the flip side, a court may also find that a landholder knew of and accepted the risk. Negligence proceedings are by no means a guaranteed avenue for landholders to recoup their loss, but are an avenue that Collaroy landholders may be able to explore.

Where insurance is not available, and there are no strict legal rights against government, landholders may request disaster relief or assistance from government.

Despite the lack of any legal compulsion to do so, Australian governments have a long history of providing disaster relief to citizens when an extreme weather event causes property damage.

A recent Productivity Commission report estimated that, over the past decade, the federal government spent $8 billion on post-disaster relief and recovery. State governments spent a further $5.6 billion.

However, the availability and amount of a payment are not guaranteed. This may depend upon the number of other claims for assistance, and any other demands on government resources. A claim for disaster relief from government may be an option for Collaroy landholders, but many other home-owners are also affected by flooding due to the recent extreme weather – and so potentially there are many other requests for relief.

What should we learn from this event for the future?

While the pictures of houses being lost to the sea in Collaroy are confronting, these images may become more commonplace. The most recent scientific report from the Intergovernmental Panel on Climate Change suggests that, under a business-as-usual scenario, a global sea-level rise in the range of 0.53-0.97m by 2100 is likely.

Even if emissions are immediately reduced, a global sea-level rise of 0.28-0.60m by 2100 is still possible. This will be especially problematic in Australia, with an estimated 711,000 residential addresses located within 3km of the shore and less than 6m above sea level – not to mention the billions of dollars' worth of government infrastructure also located in these regions.

As sea levels rise, some properties may be permanently inundated. Others may be hit by storm surge impacts or erosion, which may be exacerbated by sea-level rise.

If these events continue to attract disaster relief, the financial burden will become too great for governments to bear. Furthermore, government disaster assistance does not solve the more intractable problem of land being lost to the sea.

The pictures from Collaroy should therefore prompt a discussion about how we, as a society, can deal with the potential impacts of coastal hazards on existing developments.

This is a challenging question to answer, but there is an opportunity to address it in a planned and co-ordinated fashion.

Justine Bell-James is Lecturer in Law at The University of Queensland. This article was originally published on The Conversation. Read the original article.