Survey: Cryptocurrency and blockchain are the least-hot big tech trends of 2020

"Blockchain not Bitcoin" is a popular stance, but on the street "cryptocurrency" is bigger than "blockchain".

A Brandwatch survey of 8,000 people across Australia, France, Germany, Malaysia, Mexico, Singapore, Spain, the UK and the US asked people which big tech trend, out of 10 different options, they thought would transform society the most in 2020. 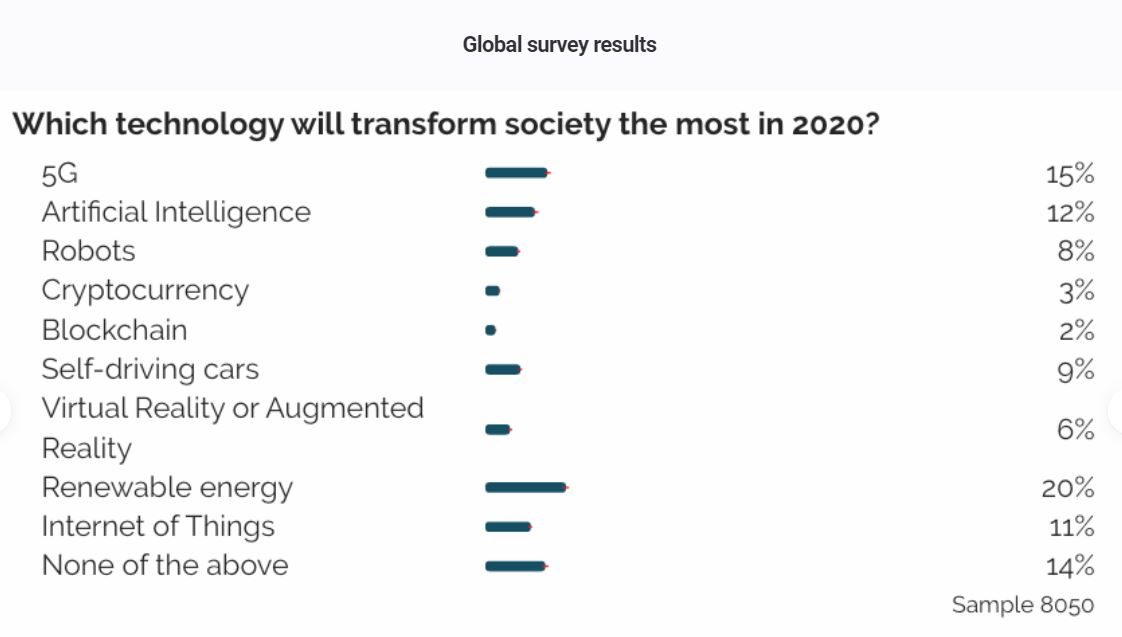 These results were broadly, but imprecisely, mirrored by discussion of tech trends on social media.

According to Brandwatch, 5G is mentioned more than any other tech trend on social media, followed by AI and self-driving cars. Following that, robots, blockchain, IoT and renewable energy were roughly on par with each other, with each taking about 10% of the discussion-share.

Cryptocurrency was only occupying about 2.5% of the discussion on social media, while VR is about 1%.

One of the most interesting facets of the survey is the considerable difference between countries. In some places, responses were almost evenly split among all answers, while others showed strong preferences for some technologies over others.

In the UK, for example, responses were "fairly evenly split", Brandwatch says. However, respondents from Malaysia were the most likely of any country to vote for blockchain and cryptocurrency.

But in nearby neighbouring Singapore – widely known as a blockchain and crypto hub – respondents were actually least-likely to say blockchain. "Robots" was the go-to answer there. And respondents from the USA were the most likely of any country to say "self-driving cars", as one might expect from a car-centric nation.

There were also age and gender differences in responses that, in short, were exactly what you'd expect as far as blockchain and cryptocurrency are concerned.

There are some things to be aware of when considering these results.

First, there are ebbs and flows in the amount of social media discussion of different tech trends. For example, the Hong Kong protests were contributing to discussion around AI.

"One of the biggest stories coming from the social data we analysed was around how Hong Kong protestors were using lasers to avoid AI-driven facial recognition technology," Brandwatch says.

In a similar vein, it's interesting that respondents were asked to differentiate between cryptocurrency and blockchain, and that more answered "cryptocurrency" than "blockchain". Surely cryptocurrency, as a blockchain application, can't change the world without blockchain doing the same.

On the whole, this may indicate a general lack of public knowledge of blockchain, with more attention being directed to cryptocurrency.

This is not unexpected. As far as public interest goes, Internet searches for the term "Bitcoin" are much larger than the terms "cryptocurrency" and "blockchain" combined. In the public consciousness, Bitcoin is still inseparable from cryptocurrency.

But despite people's low expectations of blockchain or cryptocurrency changing the world in 2020, it's still attracting an outsized portion of social media discussion.