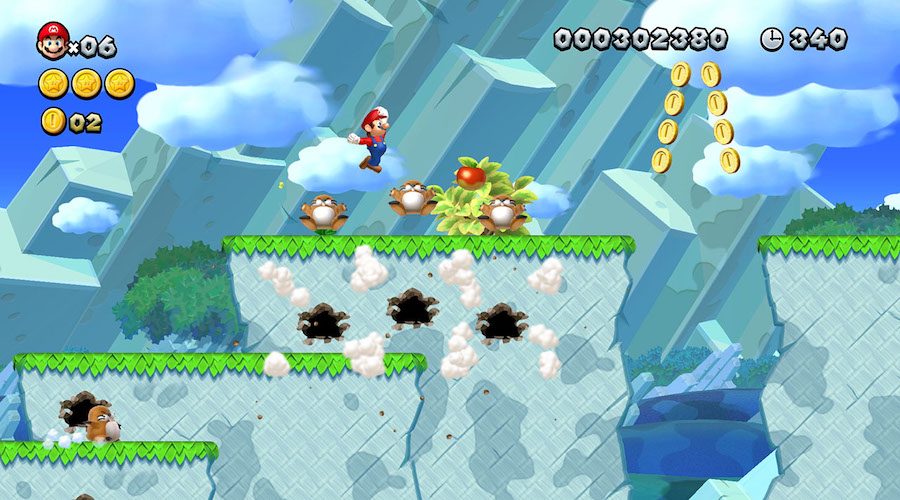 Though I love me some Super Mario Bros. (an affection that began when I picked up a NES controller in 1985), I feel like Nintendo could've safely dropped the "New" from this Switch release. After all, New Super Mario Bros. debuted in 2006. What we have here is a game I still adore, but it's more aptly described as "Incrementally Improved Old Super Mario Bros.".

Before we belly-slide into what little has changed here, let's have a quick gameplay recap for the folks who (somehow) missed the DS original and the raft of sequels that followed on Wii, 3DS and Wii U. Yes, the visuals were upgraded to 2.5D, but the "New" concept was very much the same as ye olde one. You'll need to run perpetually right, jump deftly to collect coins for lives, use your butt as a weapon and snag power-ups hidden in blocks. Bonus: wall jumping, ground pounds and triple jump techniques also bled across from Mario's 3D excursions, too.

Fast forward to today's release (which is essentially a WiiU launch title redux) and the 2006 framework has expanded quite a great deal, especially in the roster department. The DS version only offered the Bros. as selectables, whereas this Switch adventure offers the full WiiU complement of Mario, Luigi, Yellow Toad, Blue Toad and Nabbit. Plus, you now have the new addition of Toadette/Peach.

Playing as Toadette is effectively a very easy mode for new players or the younger ankle-biters in your play session. Scooping up her exclusive Super Crown power-up triggers a metamorphosis into the float-happy, double-jumping proponent of pink that is Princess Peach. Avoiding death pits will now be a cinch and other benefits include being able to swim like Ian Thorpe while being less slippery in ice environments (think: penguin-suit abilities). Oh, and all Blocks containing 1-Up Mushrooms now cough up 3-Up Moons. Three-for-one bargain!

An increase in accessibility is always nice, but there's very little here to lure veterans back to this Deluxe reissuing. Personally, the only thing that drew me in was my OCD need to secure the best technical version and the Switch renders this at 1080p when in TV mode and 720p in Handheld mode. The WiiU only ever offered "dynamic" 1080p and 720p.

It's also possible that folks who missed out on the WiiU's DLC pack, New Super Luigi U, will want to circle back and experience it here. In this offering, the main map contains the same eight world themes in the usual order (grassy, desert, ice, water, forest, rocky, cloudy and lava), but the levels within have been rejigged considerably. You'll have to contend with a noticeable increase in on-screen enemies and every playable character is gifted with the lankier bro's higher jump while also being burdened with his lower traction. Throw in the fact that mid-level checkpoint flags have been done away with and this is easily the hardest content offered in Deluxe.

In addition to replaying the Luigi content, what attracted me to this Switch version was securing the least pain-in-the-butt means to have access to one of the best party games ever. I also wanted a stress-free way to introduce my kids to Mario that didn't involve blowing the dust off and reconnecting my WiiU. Used for those two purposes, New Super Mario Bros. U Deluxe makes a solid case for essential purchase. 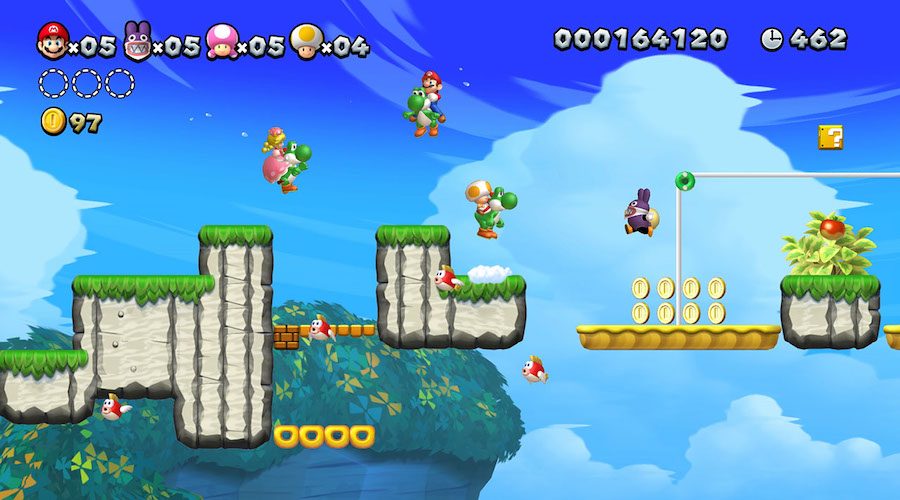 Four-player, on-the-go New Super Mario Bros. proved to be chaotic fun for my family on a recent Christmas plane trip. The hours spent waiting in terminals melted away as we co-competitively blasted our way across the Mushroom Kingdom. In no time the group was hooked on the fight for finite rideable Yoshis, baby Yoshis and the much coveted Flying Squirrel power-ups. There were also the usual passive-aggressive moments where we refused to pop each other's bubbles (the means to respawn downed players). The game proved to be so absorbing that we almost missed a flight.

In the end, that is the pure, simple power of New Super Mario Bros. U Deluxe. Yes, it lacks bonafide new material to consume, but it's a Mario Party 8 deluxe proposition, a game that practically any thumb-having human can pick up and enjoy when a Switch gets whipped out in "the world". Honestly, you're gonna want to have such a thing permanently installed. Like an unassuming brick block, one nudge is all it takes to make this tiny 2.5GB package spew out tons of fun.

New Super Mario Bros. U Deluxe was reviewed on Nintendo Switch with a copy provided by the publisher.

Being more or less the same title, this shouldn't be a knee-jerk purchase for anybody who owned this on WiiU. That said, if you avoided Wii's less-than-successful successor, this is the definitive version of some damn good platforming.