Grab your towel, slap on some sunscreen and get ready for some classic platforming action – warts and all.

Super Lucky's Tale is an odd little thing. Launched alongside the Xbox One X in 2017, it served as one of the flagship titles for Microsoft's new super-powered console, receiving the kind of promotion and pre-release hype usually reserved for your ReCores and your Quantum Breaks. It certainly fit the bill as a showpiece for the extra horsepower of the Xbox One X; its bright and colourful visuals scaled well at 4K, and its clean textures popped even more thanks to support for HDR.

At its core, though, Super Lucky's Tale was a 3D platformer of a sort we rarely see anymore. It harkened back to Crash Bandicoot and early 3D Sonic games where levels took place in linear environments rather than the open worlds of Super Mario 64 and Ratchet and Clank. Fixed camera perspectives, side-scrolling stages and bonus areas were the order of the day, striking a peculiar contrast against other recent 3D platforming revivals like Yooka-Laylee and A Hat in Time. 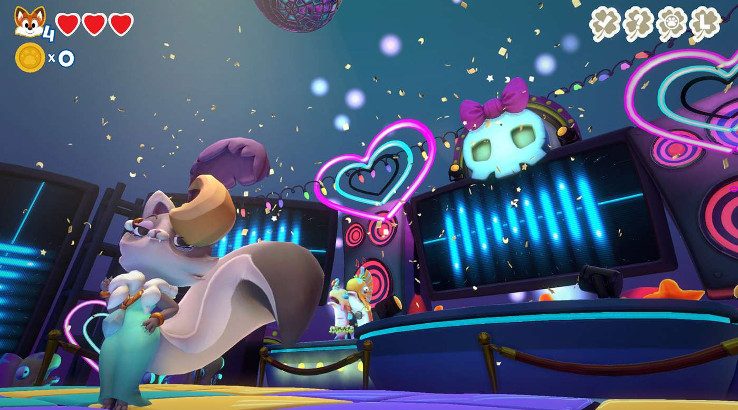 While nothing Super Lucky's Tale did was particularly revelatory, it was a pleasant platforming romp that made up for its simplistic design and emphasis on endless collecting with some gorgeous visuals and bucketloads of charm.

Now, the game has received its first slice of downloadable content in the form of Gilly's Island, a fresh world set on a sunny beach populated by sandcastles, inner tubes and head-banging worms. For those looking for a long story short: everything I just said about Super Lucky's Tale remains 100% applicable here.

As a $7.45 add-on, you'll want to set your expectations for Gilly's Island accordingly. The new world is smaller than any from the original game, sporting just three stages, a climactic boss fight and far too many sliding block puzzles – more on those in a bit. Meowmalade, the self-obsessed member of the Kitty Litter from the base game, is throwing a party in celebration of her new music release, and the booming speakers she's installed all over Gilly's Island has thrown the residents into a groove-induced stupor, preventing them from doing anything other than getting their boogie on.

This cute conceit provides plenty of opportunities for the charm of Super Lucky's Tale to shine through. From an encore by the all-worm band the Soggy Boggy Boys to a foolhardy naval assault by General Buttons and Colonel Fluffy, Gilly's Island delivers plenty of light-hearted humour sure to bring a smile to many a face – big and little kids both. 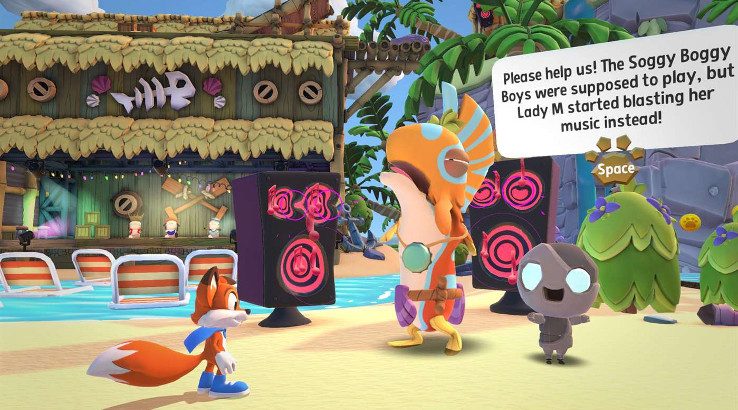 Unfortunately, Gilly's Island also brings with it all of Super Lucky's Tale's less-charming characteristics. The platforming itself, for instance, is still a little too loose and floaty to allow for precise control. This isn't an issue most of the time given the game's forgiving nature, but being set on a beach, Gilly's Island features a whole lot of water and, as we all know, water is a fox's Kryptonite – one touch, and poor Lucky is fish food.

This makes for a few too many frustrating deaths when momentum gets the better of Lucky and he goes sliding off a ledge and into the briny blue, zapping you all the way back to your last checkpoint. Checkpoints are few and far between, too, and the levels aren't particularly long either, so while it's not throw-your-controller frustrating, it's still a black mark on a game billing itself as a 3D platformer.

Speaking of sliding, Gilly's Island takes one of the most monotonous aspects of Super Lucky's Tale and cranks it up to 11. The sliding-block puzzles from the original game make a prominent return, with a half-dozen new stages for you to mull over. They aren't terrible, per se, but they feel out-of-place and serve mainly to pad out what would otherwise be an extremely short DLC – even including these puzzles, I completed Gilly's Island in around 90 minutes.

While it doesn't bring anything new to the table, Gilly's Island is a pleasant - if brief - return to the warm and fuzzy world of Super Lucky's Tale.

Available for Xbox One PC