Super contribution cap changes could end up benefiting the rich 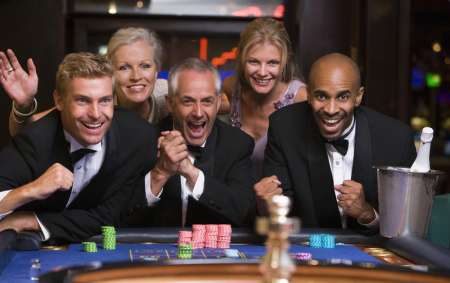 Superannuation changes intended to restrict benefits to the wealthy might actually have the opposite effect, as the Grattan Institute explains.

The superannuation changes announced in the recent federal budget will better target super towards its core purpose of supplementing the Age Pension, but in such a complex area as super, appearances can deceive. Parts of the budget package may make the system even more generous to high-income earners – and more expensive for the government.

Carry forward won't help women and carers to "catch up"

Under the plan, people will be able contribute more to their super when they have not reached their pre-tax contributions cap in previous years. Taxpayers with a super balance of less than A$500,000 will be able to draw on unused caps from the previous four years to make "catch-up" contributions.

The budget papers trumpet the ability to bring forward unused caps as helping women and carers and anyone with a broken work history. But as Grattan's submission to the recent Senate Inquiry into Economic Security for Women in Retirement demonstrates, all the evidence shows that few middle-income earners – and even fewer women – make large catch-up contributions to their super fund. 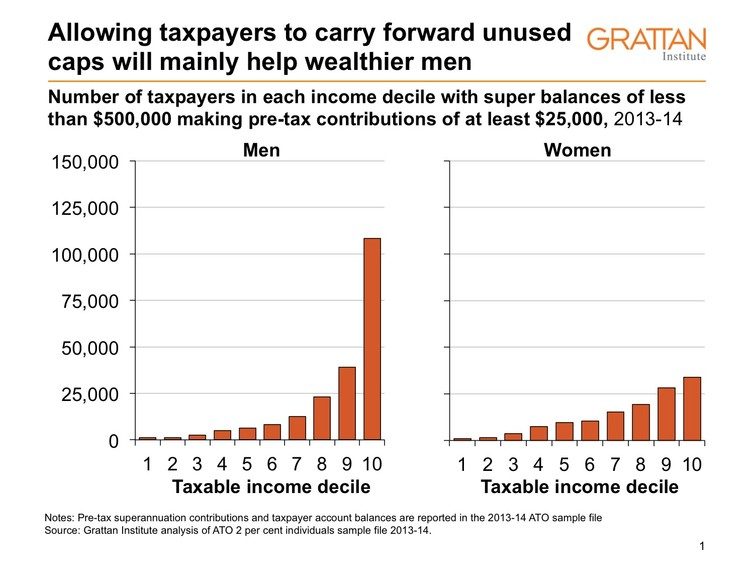 Helping high-income earners to get even further ahead

Instead of helping women and carers to "catch up", allowing unused caps to be carried forward is likely to help younger high-income earners, overwhelmingly men, to get even further ahead.

Typically, only high-income earners have enough disposable income to hit the new $25,000 cap on pre-tax super contributions. Almost two-thirds of taxpayers who contributed over $25,000 in 2013-14 and had super balances of less than $500,000 were in the top two taxable income deciles.

Of these, over 60% were men, mostly younger men on high incomes. These people will probably never qualify for a pension yet will benefit substantially from the carry-forward policy.

Another boon for tax planning

The government's plan will also increase the opportunities for tax planning for older high-income earners. Tax-free superannuation benefits for over 60s permit middle- and high-income earners to substantially reduce their tax liability by recycling wage income through their superannuation fund, irrespective of whether these workers are actually saving for retirement. As Grattan's recent report, Super Tax Targeting shows, over 60s can already recycle income through superannuation to reduce their income tax bills by around $5000 a year. Such strategies do little to boost retirement savings, but come at tremendous cost to the budget, and other taxpayers.

Under the new rules, when older workers turn 60 and have unused caps, they will be able to recycle even more of their income through superannuation, generating even larger tax advantages. For example, someone turning 60 and earning $115,000 a year – one and a half times average earnings – will gain an extra tax benefit of about $1,000 a year. And that's after factoring in the lower $25,000 cap on pre-tax contributions.

The proposal will also have significant budgetary costs beyond the four years of the forward estimates, even after adjusting the annual cap on pre-tax contributions down to $25,000 a year.

The government estimates the measure will only cost $350 million over the four years to 2019-20. However, since taxpayers will only be able to carry forward the unused portion of their contributions cap from 1 July 2017 onwards, the full cost of the policy change will only become apparent from 2021-22 onwards, when individuals have access to unused caps over the previous four years. 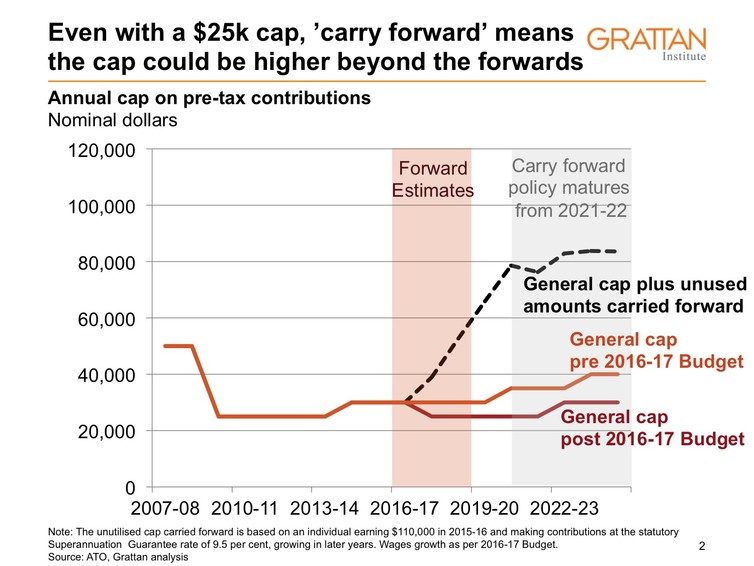 The government's move to limit exactly who can carry forward these unused amounts is a sensible one, but the $500,000 super balance threshold is far too high.

Even in a mature super system, where workers receive compulsory superannuation contributions of at least 9% for their entire working lives, most people will not retire with $500,000 in super. 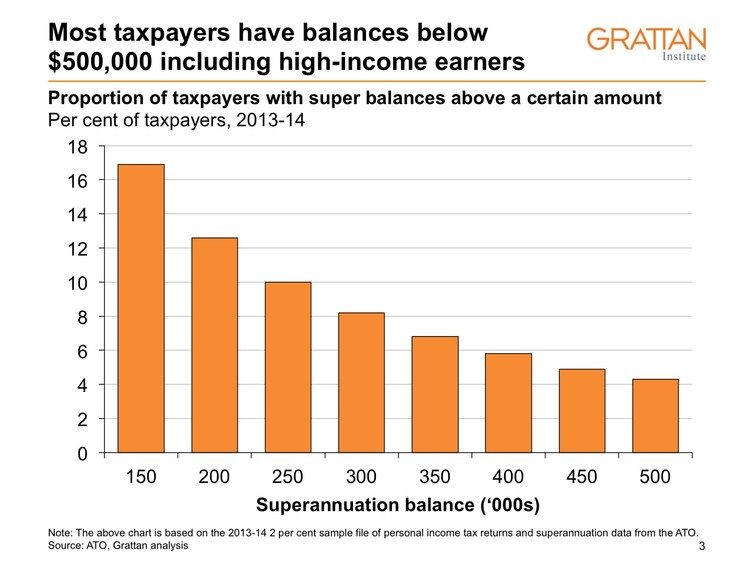 A lower balance threshold, such as $300,000, could better target the policy at those it is intended to help by excluding taxpayers with the top 10% of super balances. These people are already unlikely to ever qualify for even a part-rate Age Pension, so why give them extra tax breaks to save via superannuation?

But a broader question is whether the new bring-forward rules are needed at all.

The government claims its reforms will better target superannuation tax breaks to those that need them. Yet the new $25,000 annual cap on pre-tax contributions is still incredibly generous. The Super Tax Targeting report shows that people contributing $11,000 each year to super, together with the savings they tend to make outside super, are likely to enjoy a comfortable retirement without an Age Pension. It also shows that very few – other than high-income earners – will ever come close to breaching the new $25,000 cap. With such a generous annual cap on contributions still in place, the bring-forward rules are unnecessary.

The government has made many sensible changes to superannuation tax breaks in this year's budget. But the move to more flexible annual caps on pre-tax contributions is not one of them. While it is intended to help women and carers catch up, it will largely help younger high-income earners get further ahead.

Brendan Coates is a Fellow, and John Daley is Chief Executive Officer at Grattan Institute. This article was originally published on The Conversation. Read the original article.