The blockchain is asking some serious questions about Substratum's fundraising.

Major discrepancies have been discovered in the Substratum ICO, with crypto now worth about $400,000, but previously worth well over $1 million, unaccounted for. Specifically, 2.5 BTC, 702 BCH, 1,142 ETH and 35 LTC are missing, according to Brian Li whose blockchain forensics uncovered the missing money.

The sheer visibility of the inconsistencies is a nice testament to the transparency of blockchains. Essentially, Substratum claims to have raised a little bit of money, while their ICO wallets show them raising a lot of money.

There don't seem to be any clear answer to the questions raised by the blockchain analysis. 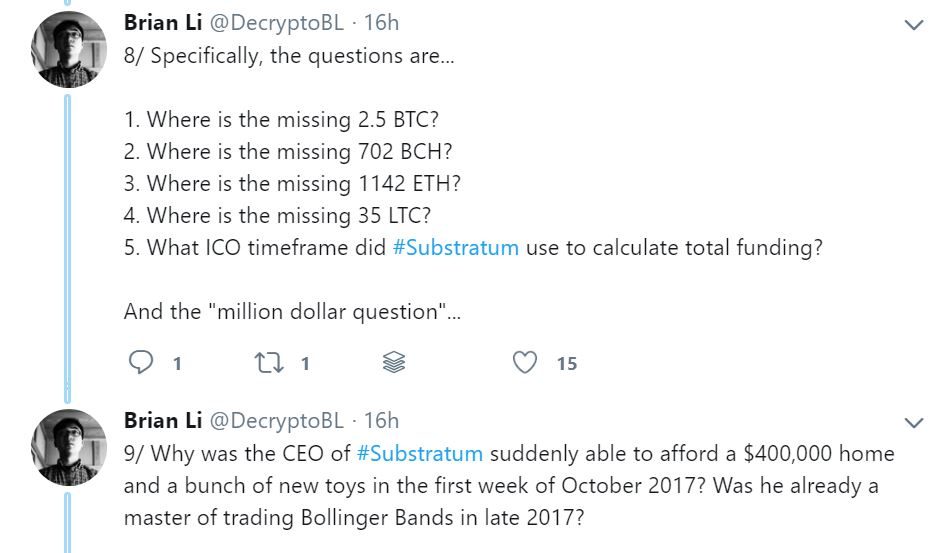 Some community members have taken a stab at answering some of the questions though, according to Decrypto. One of the main defences is that the amount Substratum claims to have raised only refers to the amount raised during the explicit ICO period, and that any funds which entered the ICO wallets outside that time period are not part of the ICO.

There are several problems with this though, as Li and others are noting. The most obvious one is that it's simply not correct, as Substratum was clearly counting LTC, which arrived outside the ICO period, and was clearly not counting ETH that arrived inside the ICO period. But even if it was correct, it might have been in questionable legal taste.

This isn't the first time Substratum has been caught waving prominent red flags. It recently started day trading investor funds and also launched into plans for a second ICO despite not yet having completed the objectives laid out by the first.

If the allegations are correct, Substratum wouldn't be the first crypto project to make big promises, cook the books a bit while raising funds, and then blow through its budget and disappear when the going gets tough.

But it's still probably the first to openly admit to day trading ICO funds.