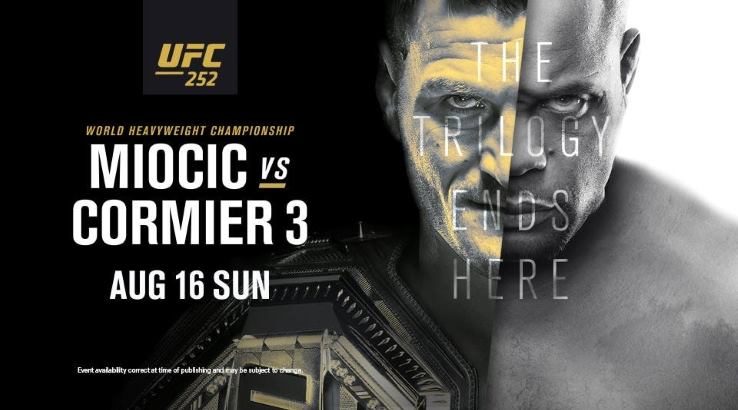 Stipe Miocic and Daniel Cormier 3 concludes 1 of the great rivalries in UFC history. This is how to watch.

Heavyweights Stipe Miocic and Daniel Cormier have established one of the great rivalries in the UFC. With one victory apiece, eternal bragging rights are on the line when they face off one last time at the UFC Apex in Las Vegas.

Expect a little rust as this trilogy fight will mark a first appearance for both fighters since Miocic stopped Cormier at UFC 241 back in August 2019 to regain his heavyweight title. Former two-division champion Cormier is tipped to retire after this fight.

When is UFC 252 Miocic vs Cormier?

Sunday 16 August is the date for the finale to a match-up that will long be remembered by UFC fans. The preliminary card starts at 10am AEST with four fights. There are five more bouts on the main card, which starts from midday AEST. Check out our 2020 UFC schedule here.

How to watch UFC 252 Miocic vs Cormier

There are a variety of options when it comes to watching UFC's biggest events in Australia. The preliminary fights are on ESPN. The main card is then exclusive to pay-per-view on Main Event. You can read all about it in our complete guide to watching the UFC.

How to watch UFC 252 preliminary card

The prelims get underway at 10am AEST on ESPN. You can access the US network a number of ways in Australia, namely Foxtel iQ, Kayo Sports, Foxtel Now and Fetch TV. UFC Fight Pass is also another option. Kayo is our pick for the prelims and loads more live sport.

How to live stream UFC 252 via Kayo Sports

Kayo has access to more than 50 sports, including the UFC 252 prelims and every UFC Fight Night. It currently has a 14-day free trial. After that a Basic subscription is $25/month which allows you to watch on 2 screens. For $35/month a Premium subscription gives you another screen.

Kayo offers a range of features too, such as SplitView. That lets you watch up to four sports at once. The streaming service is all in HD quality and is compatible with Android and iOS devices, Android TV, Telstra TV, Apple TV, Samsung TV (2017 or later), PCs, Macs, Chromecast and AirPlay. You can check out our Kayo review for more details.

How to watch UFC 252 main card

To access the main card in Las Vegas, you will need to purchase it. Main Event on Foxtel, UFC Fight Pass, Fetch TV and PS4 are the providers of the main card.

How to watch Miocic vs Cormier with Main Event

Miocic vs Cormier 3 will set you back $54.95 on Main Event with a Foxtel subscription. You can order it through the Main Event website, using your Foxtel remote, with the My Foxtel app or over the phone. You can also order UFC 252 over the phone if you have Optus TV featuring Foxtel. Ordering through a phone agent will incur an additional $2 booking fee.

How to watch UFC 252 on your PlayStation 4

If you have a PlayStation 4, look for Live Events in the PS Store. Once you have purchased the fight you can watch it through the "videos" menu. It also costs $54.95 or there is a discounted price of $49.95 if you are already a member of PlayStation Plus.

How to watch UFC 252 with Fetch TV

Using your Fetch box, go to "manage" and then "subscriptions". Once you have paid the $54.95 purchase price, you can watch it on TV or your mobile using the Fetch app.

Who will win UFC 252 Miocic vs Cormier?

At 41, Daniel Cormier acknowledges this is almost certainly his last fight. Holding a 22-2 win-loss record with 1 no contest, his best days are behind him. But the American would love nothing more than to sign off with another win over Miocic (19-3).

Current heavyweight champion Miocic, 37, holds a significant age and height advantage. Knocked out in the first round the first time he met Cormier, he made the necessary adjustments in their second fight to score a fourth-round TKO. Conditioning will play a major part in the outcome and both fighters possess the firepower needed for a knockout win. We're leaning narrowly towards a Miocic triumph with a third or fourth-round stoppage.

Tyson Fury puts his heavyweight title on the line once more against rival Deontay Wilder.