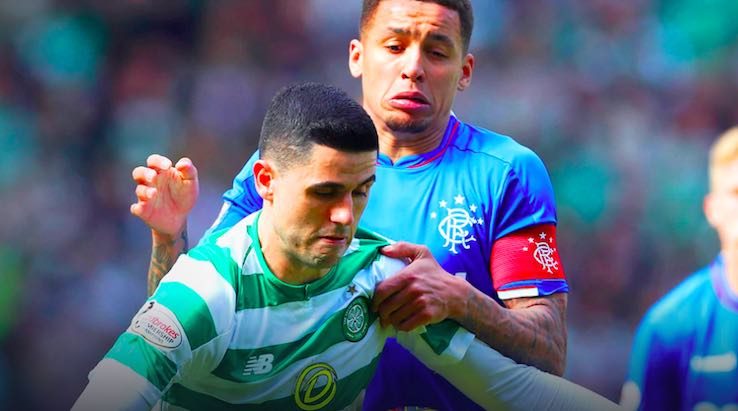 It's the Scottish League Cup Final and Old Firm rivals Rangers and Celtic will be out to deny the other silverware.

Update: Celtic and Rangers are set to come head to head again. Luckily the how to watch options are still the same as below. Celtic vs Rangers begins at 11:30pm (AEDT).

The first trophy of the season is up for grabs when Old Firm rivals Rangers and Celtic do battle in the Scottish League Cup Final. Just two points separate them at the top of the table in the Scottish Premiership so it's sure to be a great clash.

Without a doubt all football fans are aware of the rivalry between Rangers and Celtic. If you're not sure what the Scottish League Cup is, it's similar to England's Carabao Cup.

When is Scottish League Cup Final: Rangers vs Celtic?

Prepare to be tired at work on Monday. The final is set to kick off on 9 December at 2am AEDT. West Australians must note that the match starts on 8 December at 11pm AWST.

Where is Rangers vs Celtic?

Hampden Park will host the Betfred Cup Final. It's neither club's home stadium, so it's a level playing field.

How to watch Rangers vs Celtic Scottish League Cup Final

Football fans rejoice, you've got multiple options to choose from when it comes to watching Rangers vs Celtic. The final is broadcast exclusively on beIN SPORTS, which is available on a few platforms.

Thankfully there are plenty of ways to watch the match on demand if you're not willing to sacrifice your sleep.

This sometimes seems like a throwaway line, but Kayo has over 50 sports. That's a huge number and shouldn't be taken lightly when considering a sports streaming service. Partner this with the special viewing features and you have a winning formula.

Just to name a few there's SplitView (four sports at once), Interactive Stats, Kayo Minis and a Key Moments timeline. Most importantly is the No Spoilers setting, which is great if you want to watch Rangers vs Celtic on replay.

Subscriptions to Kayo Sports are priced at either $25 or $35 monthly. The only difference between the options is the latter gives you a total of three devices to watch simultaneously instead of just the two.

You can watch Kayo Sports on all iOS and Android devices, Macs and PCs. If you want to get it on the big screen you can with Apple TV, Chromecast, Android TV and Telstra TV. If you're wondering anything else then read our Kayo Sports review.

The Sports HD channel pack is available for $25/month. The real pity though is that you can't access this without the base channel subscription too. That pack is Foxtel Plus and costs $49/month.

So while Foxtel is the only way to watch sport in 4K quality, it's also costing you a pretty penny. You do get access to both Foxtel First and Foxtel GO too, but is that enough?

If you really want this option, keep your eyes peeled for a Foxtel iQ deal. Otherwise pay up the $74 monthly bill.

If you're after a cheaper Foxtel option then consider its streaming service. Foxtel Now also forces you into the base Essentials pack for $25/month with the Sport pack at $29/month. So for a mix of sport and drama maybe this will appeal to you.

A nice addition is the 10-day free trial for new customers and Foxtel GO.

beIN SPORTS isn't just a channel, it's also a streaming platform. It only shows beIN SPORTS content, but that's fine if you like football.

The subscription plans come in monthly and annual options. Paying by the month costs $19.99. If you want to try two weeks for free then you're stuck signing up for the year which is $199.99. Luckily you can cancel before the trial expires and dodge the bill.

You're limited to watching beIN through smartphones or computers and Sony Android TVs. Streaming is also supported via Chromecast and AirPlay, so you can still watch Rangers vs Celtic on the big screen.

Who will win Rangers vs Celtic?

Liverpool great turned manager Steven Gerrard can add his first ever piece of silverware as a coach. Gerrard last year coached Rangers to their first win over Celtic in six seasons.

Ex-Premier League striker Jermain Defoe might start on the bench, but it doesn't make him less lethal. Defoe has a knack of making things happen when out on the pitch. He has scored 13 goals in 22 appearances for Rangers.

Celtic look a tough outfit and clean swept all Scottish domestic trophies for the previous three seasons. If you go off their form in the knockout stages so far, watch out for the attack. Celtic netted five goals in both the quarter-final and semi-final.

Socceroos fans will have to keep an eye on forward Tom Rogic. The lanky attacker has built his career on scoring big goals for Celtic. Who could forget when he did it in the Scottish FA Cup Final against Aberdeen?

Reigning MotoGP champion Marc Márquez will be absent again as everyone tries to catch Fabio Quartararo in Brno. Read more…

The red-hot Panthers attempt to keep their run going against a hungry Raiders side in Penrith. This is how to follow the action. Read more…

A crucial two points are on the line for the Knights and Wests Tigers in Newcastle. This is how to watch. Read more…

A Collingwood side seemingly in free-fall needs to stem the tide against the Swans at the Gabba. Read more…

Geelong aim to improve their play-off prospects against North Melbourne in round 10. This is how to watch. Read more…

The red-hot Panthers attempt to keep their…

A crucial two points are on the line for the…