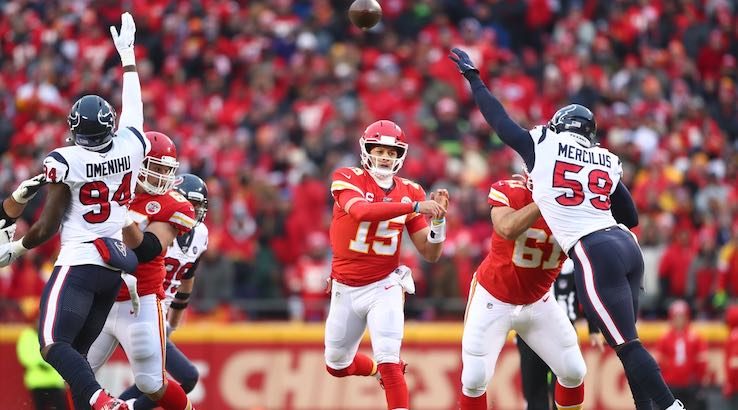 SUMMARY: Kansas City vs Houston is live and exclusive to ESPN and NFL Game Pass. Your best way to watch live is via Kayo Sports. You can watch for free using this 14-day trial. This gets you access to all its unique features and 50 additional live sports.

Not only do the Chiefs have every other team coming for them after claiming last year's title, they also ended the Texans' season during the Divisional Round of the playoffs. Houston led 24-0 before Chiefs QB Patrick Mahomes blew the Texans' defence away. So we should be able to expect a highly emotional clash, even with only around 15,000 fans allowed in attendance at Arrowhead Stadium.

When is Chiefs vs Texans?

Although this match is known in the US as Thursday Night Football, Chiefs vs Texans won't kick off in Australia until 10am AEST on Friday 11 September.

How to watch Chiefs vs Texans in Australia

ESPN is the offical broadcaster of this match. In Australia ESPN is available via Kayo Sports, Foxtel, Foxtel Now and Fetch TV. Your only other choice is the league's own streaming service NFL Game Pass. This match will not be available via Channel 7 or 7Mate.

In this article we will be focusing on Kayo Sports and Game Pass. If you want more information on other services we have a detailed how to watch NFL guide available for you, which also includes the week one TV schedule.

Kayo will have five NFL games on average per week this season. Considering the start times of some games and how many are on at the same time it's a pretty solid offering. Kayo allows you to watch either live or on demand. If you miss the start of a match, you can choose to watch from the start or jump in live.

On top of NFL games, Kayo also has shows like NFL Live and Hard Knocks, plus some college football. A subscription to Kayo will cost you $25/month to watch on 2 devices or $35/month to watch on 3 screens simultaneously. Fortunately Kayo offers a 14-day free trial, so you can test it out.

You can watch on Mac, PCs, iOS and Android devices, Chromecast, Apple TV, Android TV, Telstra TV, Sony Bravia TV and Samsung TV (2017 or later). There's also a suite of special viewing features. To see what it's like, check out our Kayo Sports review.

NFL Game Pass is the only way to ensure you don't miss a single snap from the 250+ games across the season. Packages for NFL Game Pass vary dramatically in pricing and content. The Pro package is an NFL fans' dream. It's the only way you can access NFL RedZone and Coaches Film. You can subscribe annually for $274.99 or opt for weekly which costs $28.99. It also comes with a 7-day free trial if you opt for an annual subscription.

There's a lesser subscription called the Essential package, but it doesn't have every game and costs $148.99/year. Right now there's also a free subscription, which doesn't even require a credit card, but doesn't give you any live games.

Who will win Chiefs vs Texans?

All eyes are sure to be on both teams' starting quarterbacks, the Chiefs' Patrick Mahomes and Houston's Deshaun Watson. Over the off-season, Mahomes inked the largest contract in NFL history worth $450 million over 10 years. Watson signed the second biggest contract, set to earn $160 million over 4 years.

Without a pre-season due to the COVID-19 pandemic in the US, both teams may be a little rusty and rely even more on their star QBs. Mahomes has a few more offensive weapons at his disposal, so we'll opt for a Chiefs win in a tight affair.