We come in peace (shoot to kill).

After the demise of Skylanders and Disney Infinity, there's been a toy[s to life]-sized hole in both my heart. It's the same with my two sons, too. They're aged 8 and 6 and I more or less recruited them to get their pint-sized opinions on Starlink, a game that fuses physical starship models with the delicious loot-grind of Skylanders and a dash of No Man's Sky. Those are the ingredients for a pretty stellar experience.

Also, Starfox! I want to make this important statement early on in the review: if you want the definitive experience of this game you'll really need to buy the Nintendo Switch version. The starter kit will come with a Fox McCloud pilot figurine and his iconic Arwing craft. Better yet, Ubisoft hasn't done a simple re-skin job of an existing character in Starlink. Not only does Fox and his entire team feature prominently in this adventure, but they're also given their own sizeable narrative thread that runs parallel to the main quest and it interweaves perfectly. Being a big fan of Lylat Wars on N64, I was pretty damn impressed by it.

Before we get too deep in the gameplay, let's scrutinise the build quality of the physical product. For AU$119.95 you'll be getting the base game, a ship model, two pilot figurines, two weapon pods and a connector mount that latches onto your controller. The general idea is to clip in a pilot first, then over the top of him/her/it you'll snap on a ship and then the armaments you attach all have elemental properties that either increase or decrease your damage against certain enemies. It's pick 'n' mix pew-pew.

The designs of the ships are quite cool and it's awesome that the wing sections can be detached from the central hulls (you can then create a hodgepodge craft of your own if you own a few models). More importantly, I found the toys to be durable enough to survive when my ankle-biting wingmates took them for “flights” outside of our house. It was nice to see the ships be loved as playthings as well as peripherals.

Skylanders folks know the score here: though you can technically play through the game with one ship, it's in your interests to buy a hangar full (they're effectively “lives” in the game). At present, there are six additional ships for sale (they come with two unique weapon pods and go for AU$49.95 a pop). There are also four extra weapon pod packs (they come with two new guns to clip on and go for AU$20). Lastly, we have nine additional pilots available who have unique perk abilities and in-game dialogue (they're AU$12.95).

When you clip on a ship it's time to get exploring Atlas, the colossal solar system sandbox of Starlink. Initially, your missions are free-flight affairs in space – turning and burning in dogfights against The Legion (a big bad alien conglomerate that are strip mining and subjugating the seven local planets). EVA combat like this is pretty simplistic; you track targets and try to get them in your sights by boosting and braking to sharpen your turns. The 16 weapon pods all have unique characteristics and stats that can be boosted via repeated use or via 'mod' perks that can be earned or crafted. The same self-improvement wrinkle exists for both your rides and pilots. Chase that XP and in no time you'll catch yourself feeling “ship proud”, like a Han Solo / Millennium Falcon bond. 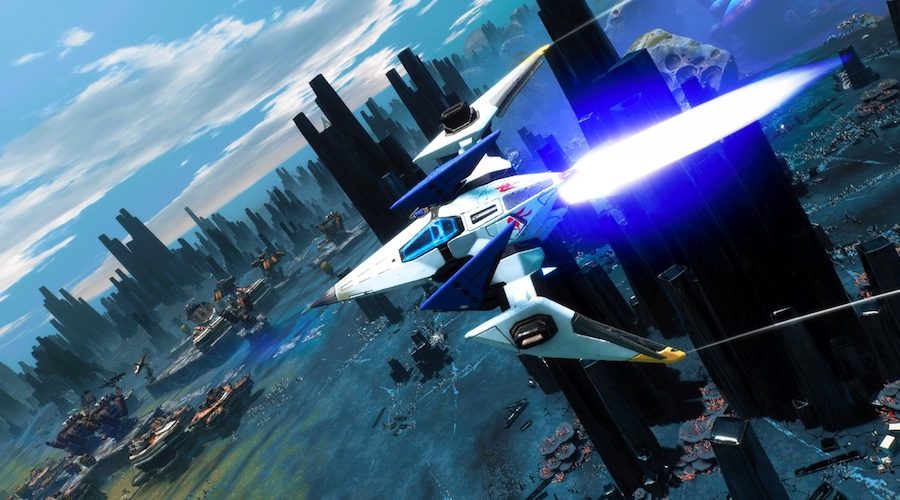 The adventure is effectively cut into seven chapters for seven sectors/planets, with Ubisoft always finding some sort of conceit to deprive you of in-atmosphere flight for a time. In these moments your starship becomes a glorified hovercraft with more traditional third-person controls. Boost jumps and circle-strafing will become your go-tos as you try to reduce enemy outposts and freaky local wildlife into slag. The general idea is to liberate a planet by undertaking a frankly overwhelming amount of terrestrial-based missions.

A lot of these are combat based, but there's also a No Man's Sky explorer vibe going on where pacifist players can scan wildlife and replace Legion enclaves with a variety of upgradable outposts that feed them intel and merchant opportunities. Factor in Starlink's impressive loot and puzzle game and you've got a bunch of addictive gameplay loops spinning in this. We found ourselves hooked for hours and that's without factoring in split-screen co-op (which, sadly, requires another controller mount AU$29.95).

Subsystems and hooks aside, what's Starlink like as an experience? It's certainly been produced with love. Ubisoft has a well-crafted, well-voiced cast of spacefarers here that only occasionally veer off into what I like to call “Saturday Morning Cartoon Cringe”. The fight to rescue your kidnapped mentor and raise a resistance in these new worlds is also regularly punctuated by tons of radio chatter and some well-directed end of chapter cutscenes. The venerated Snow Drop engine is pushed to new macro extremes by allowing you to explore complete planets and push from atmosphere to space and back again. (The seamless transition of this never fails to blow my mind, too).

Mind you, such wide vistas come with an obvious downside. Mostly, it's asset reuse and the nagging sense of deja vu as you see, and quite often do, very similar things as the final hours roll on. If you're not loot-and-grind inclined, I could see this as being a pretty sizeable problem. My somewhat OCD self was fine with it.

All that said, I ejected from my playthrough of Starlink quite impressed. For starters – and please excuse the toys for life pun here -- this is a firm base on which to clip on more sequels to create a franchise. Secondly, Ubisoft has wisely avoided the usual dickishness that comes with the genre -- the pressure to expand your toys doesn't weigh heavy, nor is it a denier of large chunks of content.

Plus, you have the more economical option to digitally microtransact the bits you want and use them in that fashion. In this way, Starlink avoids a lot of the blackholes that almost killed off the toys-to-life genre entirely. What we have here is light years ahead of the (now non-existent) competition.

We reviewed Starlink on Nintendo Switch with a copy provided by the publisher.

I thought I was done with the Toys to Life phenomenon. Now I find myself and my young co-pilots happily locked into the cockpit of Starlink. The sheer addictiveness of the shoot 'n' loot will keep us here for quite some time to come. Starfox is just the nostalgic cherry on top.

Available for PS4 Xbox One SWITCH