Space, VR: the final frontier. These are the continuing voyages of my starship, the U.S.S. Aegis. Her 5-mission campaign: to explore strange new worlds with three mates I wouldn't trust to sit the right way on a toilet seat, let alone crew my Engineering, Tactical and Helm stations. Together, we sought out new life and new civilisations. We boldly went where no gamer has gone before.

Roleplaying aside, that last statement feels true, you know. There's never been a gaming experience quite like the four-person multiplayer VR sessions provided by Bridge Crew. Imagine it with me now: you're sitting in, nay inhabiting, the captain's chair of a spin-off vessel in the J.J. Abrams timeline. Your virtual body is stretched out before you, and you have 1:1 control of virtual arms to tap out crew orders. Your crew are other humans, online in their own VR headsets, be they Oculus, PSVR, or Vive, this is gloriously cross platform. 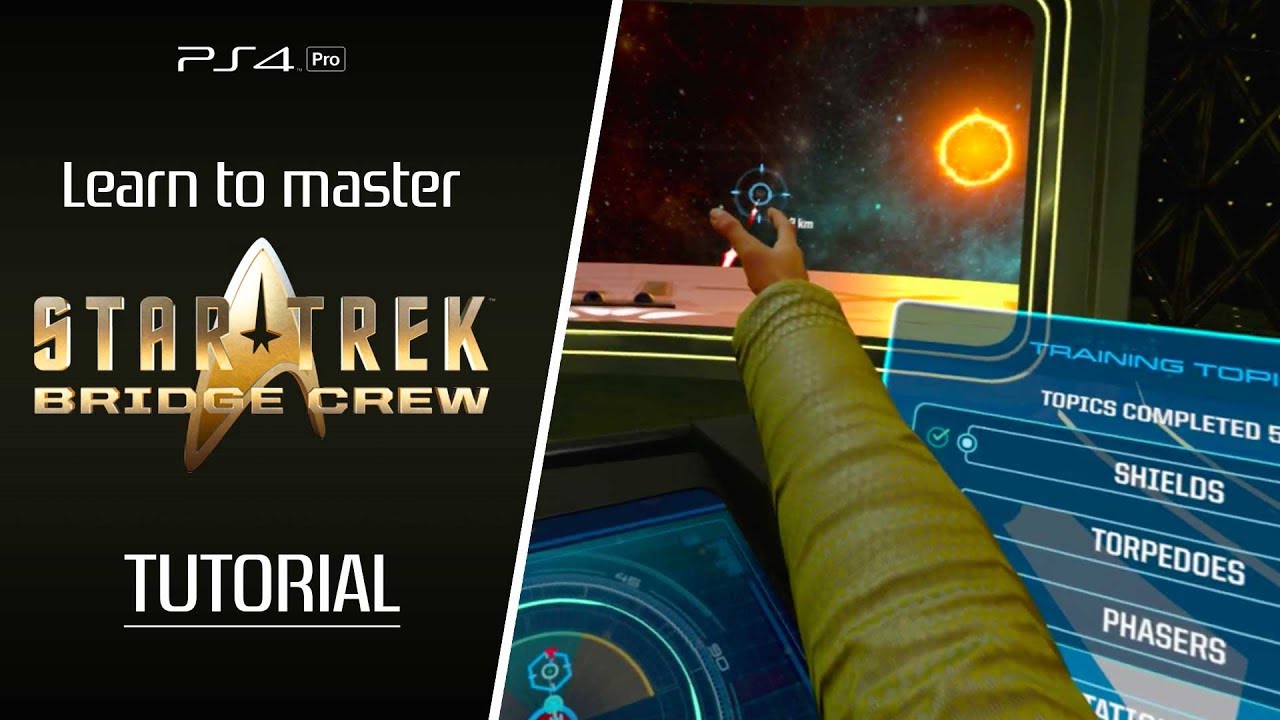 If your experience is anything like mine, your shipmates will become a dysfunctional family prone to Mexican waves, and they'll put on Scottish accents whenever the engines don't have enough power. When these people physically turn around to address you, Captain, their avatars will bodily swivel about in their chairs. When they speak, the mouths of their customised Vulcan visages will puppet away. If the crap has just hit the fan and the bridge is on fire, they will make their limbs flail about like scared Team America mannequins. Take it from me: even when you're sucking at it, Star Trek Bridge Crew is absolutely amazing fun.

If you don't want Klingons off your starboard bow, shredding you into the galaxy's next comet, you'll need to asymmetrically band together with your shipmates. Everybody has their own unique touchscreen sitting in front of them, and everybody needs to communicate what they're doing. As Captain, I had to relay mission objectives, request escape vectors, and decide whether or not to maintain stealth, come in peace, shoot to kill, or create an odd combination of the latter two options. In short, it's the ultimate power trip.

Meanwhile, the Helm station steers the ship, handles acceleration and can plot either short Impulse jumps within a star system, or larger Warp journeys to distant galaxies. Best of luck doing that if Engineering hasn't given you enough engine power to do so, or has failed to repair critical systems damaged in combat. Speaking of the pew-pew, Tactical handles your limited supply of homing proton torpedoes, phaser banks and shields. They also beam people up; simple, yet immensely satisfying wish-fulfilment. 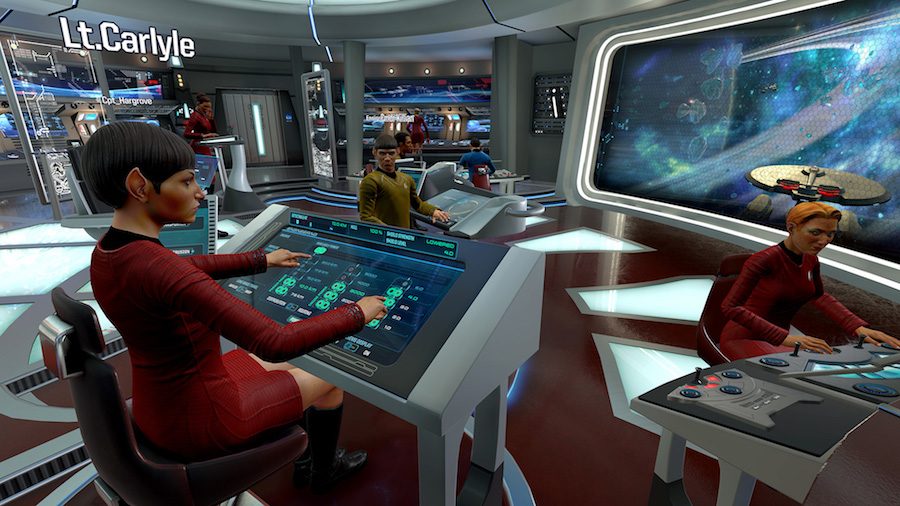 Use the tutorial, and in all of 15 minutes you can get to grips with these systems so as to be a functional-enough cog in a complex machine. You'll want to be multi-talented, however, because whenever humans can't join you, semi-competent AI crew will take their place. Issuing crew-wide and station-specific commands is perfectly functional and fine in the opening, 40-minute-long missions. Disorientating, but it's wholly possible for skilled solo players.

That said, hit the deep end of the campaign and you're better off using the consciousness transferal system to inhabit crew for critical points in the mission. This also works seamlessly, but keeping four plates spinning at once is extremely difficult when you're a limping vessel forced to survive overwhelming odds via cunning, stealth, and sheer Kirkesque luck. This looks like a short campaign on paper, but if you're not running on full human-power with veteran know-how, you'll be ship outta luck in no time.

Anybody after more longevity and sadistic difficulty can take on the procedurally-generated “ongoing missions”. Those after a shorter voyage can request the specific mission variants which are Defense (protect Fed vessels from incoming enemy waves), Recover (hunt fugitives and take them alive before they can escape), Rescue (save hapless colonists from their broken ships and virginities), and Research (find new planets and expand Space-Wikipedia). Setting these to randomly, dynamically change as you go on an open-ended voyage is pure Star Trekking bliss. 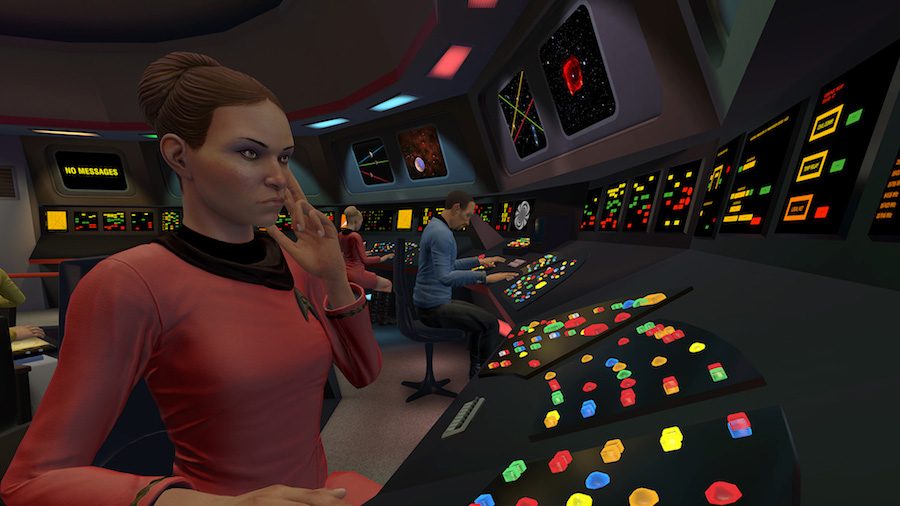 Uber fans will also squeal like schoolchildren when they play Ongoing Missions in the original U.S.S. Enterprise. The OCD authenticity to this iconic bridge and its sound effects is truly remarkable. But be warned: the Enterprise is ball-bustingly difficult as it lacks a lot of the Aegis's modern systems. That, and your fancy touch-screens get swapped for the hilaribad 1970's predictions of what would make a futuristic, functional command centre. The help overlays that explain what each of your coloured gems do will mitigate most of the crappiness, but having to crane your head to distant info boards will give you a crick in the neck in no time.

Even as a predominantly Star Wars fan with only a basic working knowledge of this universe, Star Trek Bridge Crew has won my heart. It's also warped my perceptions of what's possible in virtual reality gaming -- and by a factor of five, no less. In terms of shelf-life, Bridge Crew should live long and prosper, due to Ongoing Missions and fan-service DLCs that have yet to de-cloak.

We reviewed Star Trek Bridge Crew Review on PlayStation 4 with a copy provided by the publisher.

Solo-play is a tough sell, but there's a pool of players from 3 different VR systems waiting to join you. It'd therefore be highly illogical to hold off on a purchase of this. Make it so. Engage today.Available for

Was this content helpful to you?
Thank you for your feedback!
Dreamfall: Chapters Review: Some stories are better left untold Mario Kart 8 Deluxe Review: Return of the King