Show your support for the LGBTQI community every time you pay with the limited edition St.George Vertigo and Vertigo Platinum credit cards.

In time for the 40th anniversary of the Sydney Gay and Lesbian Mardi Gras Festival, St.George gave some of its cards a fabulous techni-coloured facelift in February 2017.

However, St.George customers can continue to showcase their pride every time they spend when they apply for a rainbow St.George Vertigo or Vertigo Platinum credit card.

Although both cards don the colours of the rainbow, there are a few differences that you should know about the products before you sign up. This St.George Vertigo card is a no frills product that’s suited to cardholders who want to pay on plastic but keep their card costs low.

It offers a 0% p.a. interest rate for the first 6 months on purchases (reverts to a competitive variable interest rate of 13.99% p.a.). When you pay your monthly payment balance in full, which excludes current balance transfers, listed on your statement by the payment due date, you can also take advantage of up to 55 interest-free days on purchases. Note that interest-free days are separate from any longer-term interest rate promotions. It also charges a $0 annual fee for the first year ($55 p.a. thereafter), which is a relatively competitive offer.

If you’re working to pay down an existing debt, you can take advantage of a promotional balance transfer offer of 0% p.a. for the first 32 months, with no balance transfer fee. This reverts to the variable cash advance rate of 21.49% p.a. once the promotional period is up, so make sure to pay your balance in full before this happens.

You can also request an additional cardholder, which could come in handy if you want to manage your finances under one account. 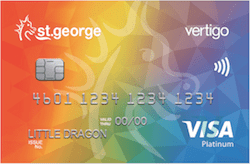 If you like the sound of the Vertigo card but would prefer a card with a few more perks, the St.George Vertigo Platinum card could be a better fit.

This card offers a low variable purchase rate of You can also save on existing interest costs with for the first 12 months on balance transfers, with no balance transfer fee. After the introductory period, any balance remaining will be charged at the variable cash advance rate, currently You will receive up to days interest-free on new purchases when you pay your monthly payment balance listed on your statement in full by the payment due date. Note that these interest-free days are separate from any longer-term interest rate promotions and the monthly payment balance excludes current balance transfers.

Although it’s tempting to be lured in by the promise of a colourful card, make sure you compare the rates, fees and extra features of both cards with others on the market before you apply.

St.George also commissioned a report into the financial well being of the LGBTQI community in November 2017, revealing that nearly 7 in 10 are worried about their financial future.

“As a family bank that’s committed to the diverse needs of all Australians, we’re really proud to celebrate what’s important to our customers and support equality in all its forms with the release of our new rainbow Vertigo card," said Ross Miller, general manager of St.George. "The card is one of the many ways we’re supporting inclusiveness and is available for all customers in St.George branches around the country, just in time for Sydney Mardi Gras.”

This isn’t the first time an Australian bank has shown its support for the LGBTQI community either. ANZ is well known for its colourful (and often mustachioed) GAYTMs and it also launched its #HOLDTIGHT campaign in 2017. The bank released limited edition wristbands that used infrared technology to detect proximity between wearers, lighting up when their hands came together.

And although this the first rainbow credit card down under, Virgin Money launched a similar product in the UK in December 2017. Its Rainbow Credit Card gave its customers the opportunity to show its support for the LGBTQI community and raise money for Stonewall, the LGBT rights charity. It made a donation of £1 to Stonewall for every transaction made using the rainbow card in the first three months following account activation, up to a total of £100,000.

Although it’s awesome to see a financial institution like St.George showing its support for the LGTBQI community with its rainbow cards, hopefully we’ll see the bank launch a more philanthropic version of the product to celebrate Mardi Gras in the coming years.