Sphero R2-D2 Review: This is the Droid you’ve been looking for

Alex Kidman
Posted: 20 September 2017 3:26 pm
News
Quick Verdict
Not every Star Wars fan will be able to justify R2-D2's high asking price, but for those who make the investment, you're getting an excellent Star Wars collectible as well as a genuinely fun toy.

In a vast galaxy of Star-Wars toys, Sphero's R2-D2 stands out in all the best ways.

Sphero in many ways struck it lucky with its BB-8 Star Wars toy a couple of years ago, because while it had innovated in spherical toys before BB-8's creation, he was such an obvious match for the company's fun interactive technology.

A few years down the track (and with a companion BB-9E offering much the same experience for those of us on the dark side of the force), and Sphero's latest offering is pitched more at classic Star Wars fans in the form of an interactive, $299.99 R2-D2. That's a serious asking price for a toy, so R2-D2 has his work cut out for him well before you actually take him out of the box. Which I totally did, so mine is no longer in strict mint condition. It's these kinds of sacrifices that must be made in the name of proper reviews, people! 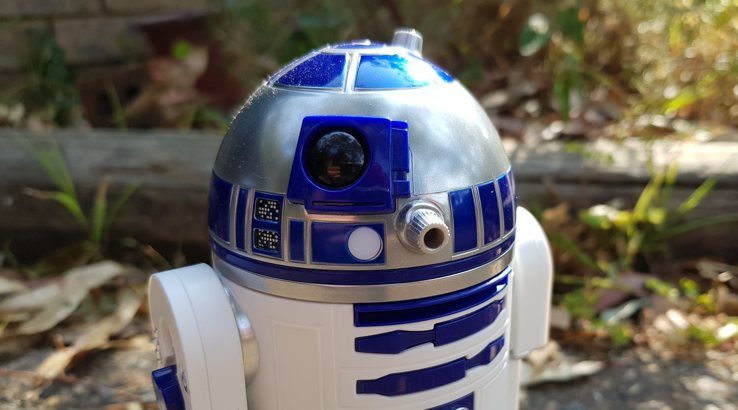 It's not as though there's a shortage of design inspiration, or for that matter other R2-D2 toys that Sphero could have drawn from, but still, there's not much that can compare with the sheer silly grin that's likely to come across your face when you take R2-D2 out of the box and take him in. I was instantly transported back to my youth (not that I could have afforded R2-D2 back then), not to mention a galaxy far, far away.

R2-D2 stands 17cm tall, 10.8cm wide, and naturally he's the proper "trash can" shape that he should be. Where Sphero's previous Star Wars toys were all spherical, R2-D2 instead uses rubber tracks on the bottom of his feet for propulsion. There's some slight concern there as over time they could wear out, and they're certainly good at reminding me anywhere I haven't swept up cat hair recently when I used him.The attention to detail on R2-D2 is really nice, with proper led lighting in his head, speakers that are good enough to convey his iconic sounds with proper force and clarity, and everything exactly where you'd expect it, right down to his retractable third leg. If you wanted to be pedantic, an R2-D2 with a full metal finish would be even more authentic, but it would undoubtedly be heavier and more expensive.

Sphero's previous licensed toy, the Sphero Spider-Man was ultimately a disappointment, because while he was a lovely and fun design, he simply wasn't interactive enough, being not much more than a speaker with LED eyes. Thankfully that's not the path that Sphero went down with R2-D2. Instead he's a fully mobile droid in the same style as BB-8 or B9-9E, with an all-new Droids by Sphero app for Android or iOS to control him.

Where BB-8/BB-9E is all about rolling chaos and the fun you can have trying to keep him under control, the nature of R2-D2's rolling tracks means that he's somewhat slower and ultimately easier to control. As with the previous Droids, you can simply drive R2-D2 as though he was a remote controlled car, or sit him in front of Star Wars movies to see him react to key scenes. At the time of writing that's only Rogue One, The Force Awakens and A New Hope, but the app suggests that the other films are "coming soon". Then again, it also suggests that somebody made prequels to the classic trilogy at some point. I can't possibly believe that's true, or my mind has deliberately blanked this information out to protect me. Probably the latter.

You're not likely to spend all day watching Star Wars films with R2-D2 anyway, simply because his power won't last quite that long. You can keep him tethered to power to keep him going for an entire film, but that runs the very real risk of him tripping over his own power cable while reacting to key scenes.

You can also opt to virtually "drive" R2-D2 through the Millenium Falcon, but this is pretty much a one-time game that you're unlikely to return to. Before you ask, no, there doesn't seem to be any secret code to get R2-D2 to act as a holographic projector. Maybe that'll be a feature for the next model?

R2-D2 charges via standard microUSB, which is super-handy, because it means you can top up his power from just about any mobile charger, or the USB ports on your laptop. Battery life is stated by Sphero at "over an hour" on a full charge, which isn't terribly specific. In my tests, an hour is entirely achievable, but don't make any longer-term plans unless you plan to strap a battery pack to R2-D2. 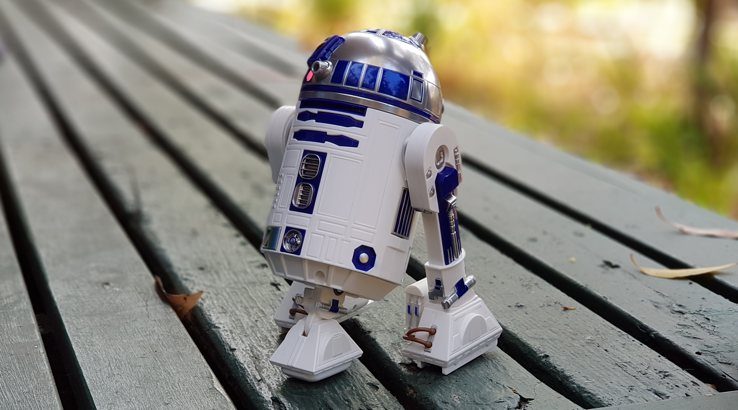 At $299 outright, R2-D2 is undeniably a big kid's toy. Kids will love him, but few would be able to afford him. He's part of a vast galaxy of Star Wars toys, because, let's face it, it's not as though R2-D2 toys are in any way hard to come by.

Still, R2-D2 by Sphero is something special, because he's been very well produced with long-term Star Wars fans in mind, combining authentic design with plenty of fun interactive features. You probably already know if your budget can stand his asking price, and presuming you can leap that particular hurdle, he's an easy recommendation for fans. 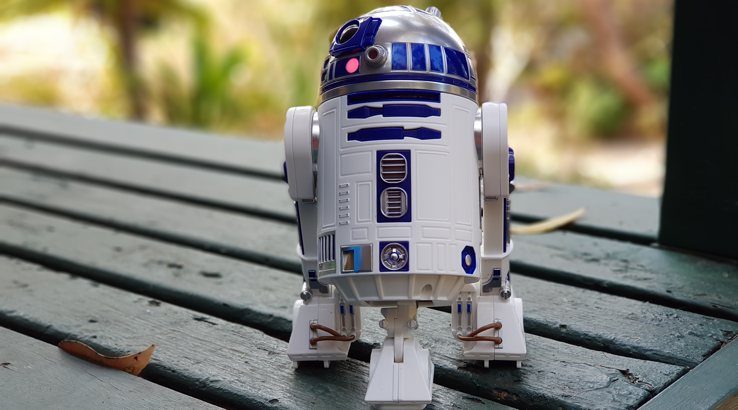