This year, Sony has branded itself as the original premium brand and the great innovator pushing the envelope of display and sound. To underline this, the company released its Master series of TVs, highlighting the company's work in "matching the creator's intent" in how image and sound should be played. Sony claims it is bringing the high-end screens of professional filmmaking into its customer's lounge rooms – at least the customers with lots of money to spend.

Pricing aside, as the frontrunner in Sony's TV offering, the A9F delivers a spectacular viewing experience, taking back the OLED reins from competitors like LG and Samsung. 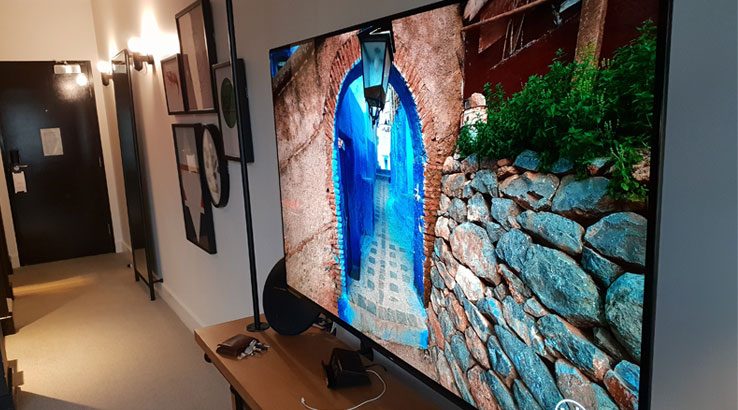 The A9F is thin, sleek and attractive, made from premium materials – nothing about it seems cheap, light or weak (which is a good sign, no doubt, for a $6000+ television).

I've used it and the A8F, its predecessor, in both stand- and wall-mount configurations. The stand behind the screen is large but not ugly, and contains a lot of the tech required to run the low-profile OLED panel. Standing it up in your living room is going to be the easiest install option, but it does mean the TV will lean back ever so slightly. If this annoys you, the wall mount option is the way to go.
There are only a few millimetres of bezel around the screen – it's so small, I actually missed the Sony logo in the bottom left corner. 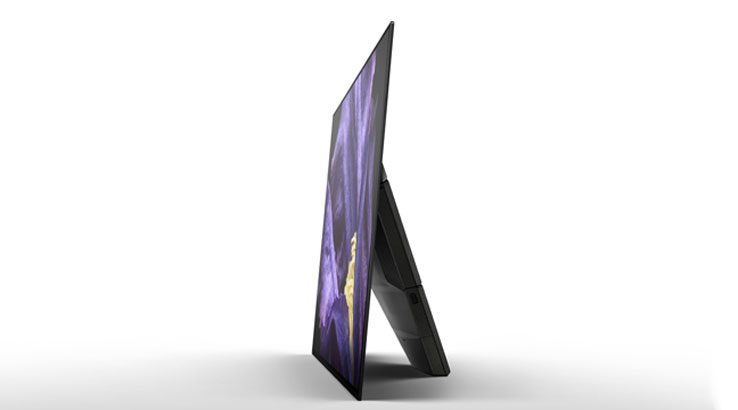 Installation and set-up were quite easy, although a USB keyboard would be a good set-up peripheral to make entering Wi-Fi passwords easier. Other than that minor hiccup, the process was reasonably smooth, with devices, speakers and apps connecting easily – likely owing at least in part to the updated OS, Android 2.0, which you can read about below. Cable management is easy by virtue of the A9F's stand. You simply tuck your HDMI, power and miscellaneous other cables away discreetly behind the stand, which looks especially clean with the cover on if you aren't mounting the unit to the wall.

The remote, sadly, is the same you'd have received with previous models. It's boxy, rubbery and feels pretty cheap, which is disappointing when you're getting a premium TV from a leading brand.

The A9F has probably the best OLED picture performance we've seen thus far on a consumer device. 4K HDR content looks absolutely stunning. It's all powered by the X1 Ultimate processor, an upgrade from the Extreme processor we saw in the A9F's predecessor (the A8F). The upgrade was necessary because people criticised A8F's processor for being a little slower than the processors from competitors. 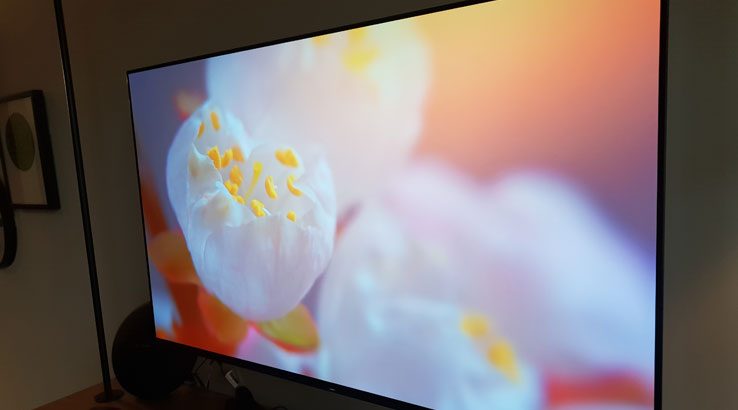 Colours and blacks are as expected from a top-of-the-range OLED. Black is truly pitch-black and provides a crisp contrast to the subtle, deep array of colours available. The colour array is truly impressive, and Sony touts the TVs processing as the real driver behind the brilliance. It has Sony's Pixel Contrast Booster operating behind the scenes too, which is their high-brightness panel controller.

Fast-moving scenes are also exceptional. Their proprietary X-Motion Clarity technology is part of the processing here, and apart from being yet another brand name with an "X" appended to it (X-tended Dynamic Range, X-Motion Clarity, X-Wide Angle... you get the picture), it seems to be very effective. Like all OLED TVs, the A9F has an incredibly quick response time (that is, how quickly pixels can transition from one colour to another). This results in almost no blurring when things move quickly on screen, which looks great but may be off-putting for some.

4K content is steadily becoming a well-distributed format for major entertainment providers, especially with streaming platforms such as Netflix and Stan. Netflix maintains a well-stocked library of 4K content, mainly composed of its Netflix Originals.

One of the standout features is the Netflix Calibrated Mode. This is something Sony highlights in its overall Master series campaign, claiming the new mode tries to reproduce the original content as closely as possible. Essentially, Sony has partnered with Netflix to work a lot of production metadata into this preset viewing mode to fine-tune the app experience to a T. It's supposed to be like watching Netflix on a TV studio's reference monitor – and Netflix does look great, but it's hard to tell how well the feature works without having another A9F on default settings next to it.

Low-quality content is processed fairly well too. High-end TVs such as the A9F include upscaling engines as part of their image processing, which improves low-resolution content for display on a much larger screen. The 480p content I viewed on YouTube had zero artifacting, banding or any telltale stretching signs. 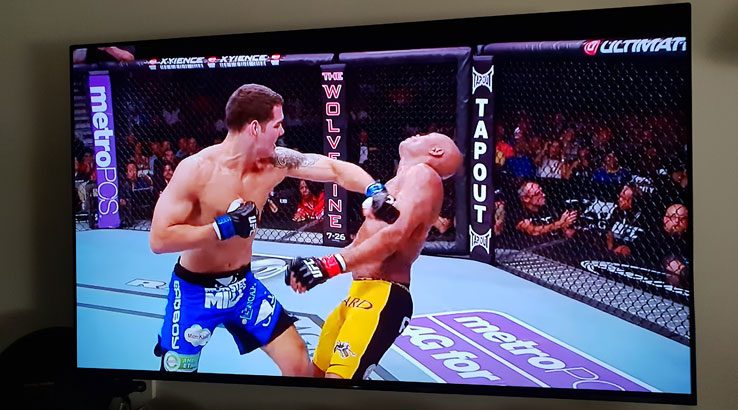 As part of the demo, Sony set me up with a side-by-side comparison with the A9F versus a "major competitor's flagship model" (an LG). I didn't see exactly what model it was, nor was I allowed to take footage. The A9F outperformed it strongly in blacks, contrast and motion processing, with the only area it possibly lost was in overall brightness. Unless you watch a lot of content with bright outdoor scenes, or your lounge room is exceptionally sunlit, I doubt the small difference will matter much.

Sony's Standard preset mode performs admirably, but the Vivid setting gives animation and CGI action movies a bit more of a visual kick. If you want to nerd out with a pixel calibrator and software, Sony demonstrated this in action and assures us that you can calibrate the A9F to any standard a professional might require. 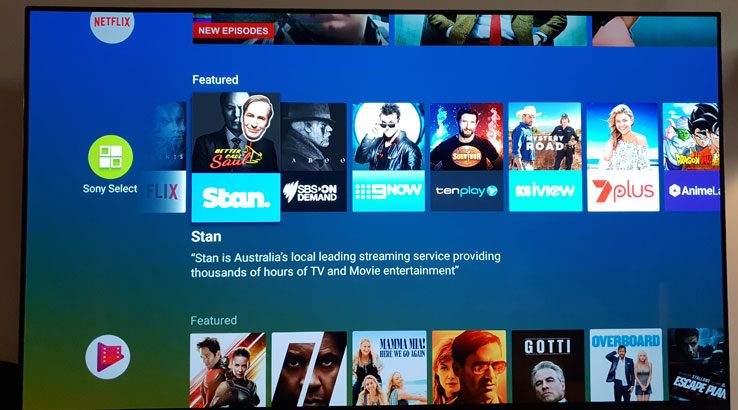 Sony has upgraded the A9F to Android TV 8.0 (Oreo) from the 7.0 that came with the A8F. It's a great upgrade from the A8F's sluggish performance. There's a lot of extra customisation on the home screen, your media channels and the apps themselves, allowing you to rearrange and re-theme your TV according to what you use the most.

It's also, courtesy of Google, fully capable of integrating with all Google Smart Home devices as a controller. Users don't have to rely on the microphone button on the rubbery remote any longer since the A9F has Google Assistant fully built in. A simple "Hey Google" is enough to wake it up and order your robot army to vacuum your carpet, turn the lights on or battle the neighbour's cat (not advised). 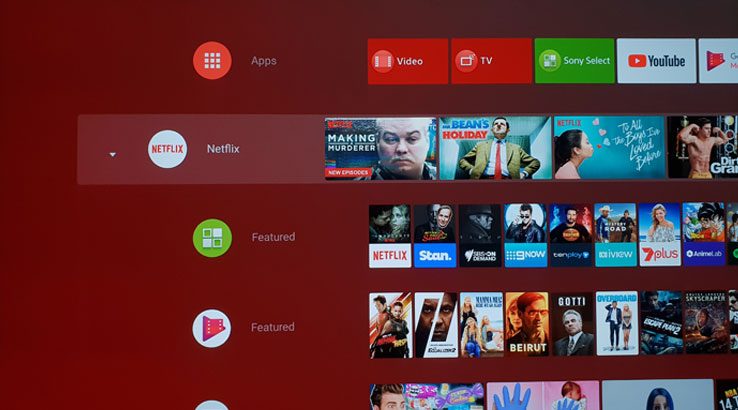 The A9F has an upgraded sound system – the Acoustic Surface Audio Plus. The Acoustic Surface uses the entire panel as an actuator, allowing the sound to come from all parts of the screen, which is especially cool when watching action movies or content with lots of directional audio.

It's a 3.2 virtual surround set-up that performs well in a medium-sized space (a typical lounge room). It's loud and high-fidelity enough for most consumer audio needs, but for discerning home cinema enthusiasts, dedicated speakers will perform better. Sony has also built in a nifty mode where the Acoustic Surface acts of a centre speaker in your surround system if you have a third-party set-up.

The A9F's bass performance and overall clarity beat the LG model in Sony's side-by-side comparison, but we took this with a grain of salt given the lack of information about the specific model and settings. 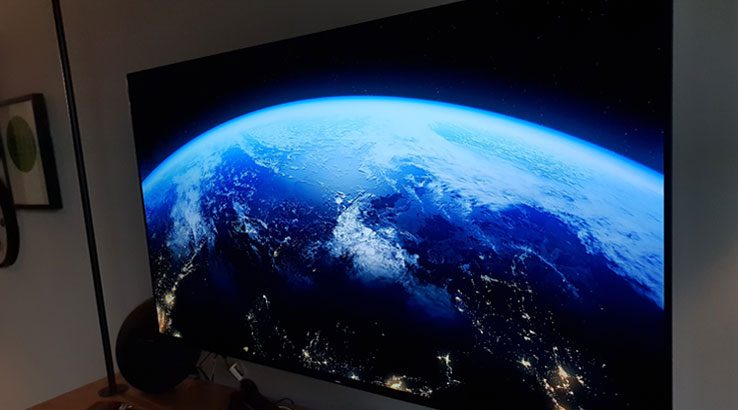 The Sony A9F is an excellent TV that's capable of handling pretty much anything the average consumer can throw at it.

It excels with 4K content, especially in dark, medium-sized rooms, making it a premium lounge-room movie-watching experience. It has seamless motion processing, great response times and colours that pop more vividly than most real-life experiences. Android Oreo makes the whole experience slick and easy, and even shoddy old footage can look great on the ultra-slim 4K panel. While it's not the brightest of flagship OLEDs, nor immune from the risk of image burn-in, it's a fantastic, first-rate TV – if your pockets are deep enough.

We've reviewed two LG models similar to the Sony Bravia series, which were excellent TVs at the time of writing (early 2018). The LG E8 2018 OLED, and the LG 65G7T OLED, still provide very good picture quality at a substantially lower price bracket than the A9F.

The DJI Spark is small, lightweight and easy to control, making it a great starting point for anyone new to the world of drones.