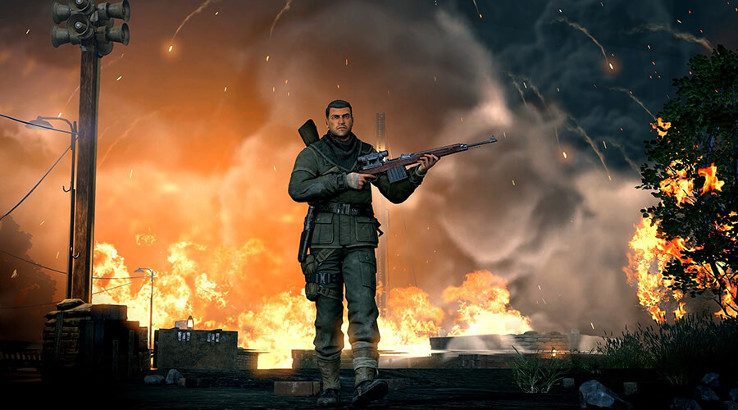 It's even gorier the second time around.

While I didn't take him by surprise at all, the fascist sharpshooter could not have imagined the death that awaited him. From an elevated nest, he'd eagle-eyed the glint of my scope in the second that I'd marked his. The first round we exchanged parted the hair on my head, instead of turning it into a canoe. My aim was truer. Sniper Elite V2's kill-cam did its gore-gous work in slow-motion.

A single 7.62mm round lazily drilled through the air and into its new home – his nether regions. The X-ray showed me far too much of the amateur vasectomy that followed. Like I said before, not in his worst nightmares could he have imagined this. One might go so far as to say he did Nazi this coming.

When I took aim at the original Sniper Elite V2 in 2012 on PS3, I remember thinking it was two things: short and scrappy. For starters, you could blow through it on a respectable difficulty in four hours plus change. Secondly, it was clear that every facet outside of this experience's drawcard – shooting people horrifically from another postcode – was in need of polish. Visuals, movement, controls, storyline – you name it; it was acceptable for the time, but could have been done better. Developmental targets were grazed rather than hit square.

That said, I also recognised that there was a ton of potential present. Having this become a continuing franchise worthy of its own niche fan base of wannabe Lee Harvey Oswalds didn't seem like a long-shot. Fast forward to today and I'm happy to say that we're on the right side of a fourth major release of this tactical third-person shooter. Sales seem strong for developer Rebellion, too. 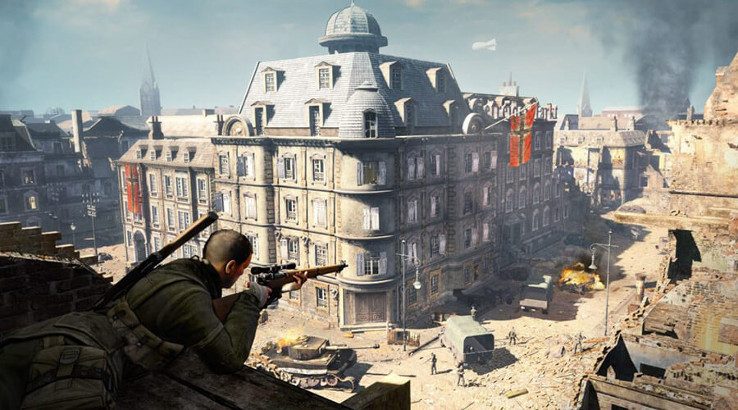 Be that as it may, they've decided to set their sights on the remastered route for a (relatively easy) shot at hopeless nostalgics like myself. Personally, I was lured out of cover for the chance to actually see my victims without a scope (the PS3 was a 720p study in murky browns). While it's not resplendent, Rebellion has done a decent job of making a half-destroyed German pop in 4K and it's great to be back in the boots of the ridiculously grizzled Karl Fairburne, an OSS assassin who sounds like he gargles gravel every morning after a whiskey breakfast.

That and I simply can't resist one more opportunity to shoot Adolf right in the moustache. The "Assassinate the Fuhrer" mission, along with all the original DLC (Saint Pierre, Neudorf Outpost, The Landwehr Canal) have been included for free. Expect a few much needed extra hours here.

If you've never played a Sniper Elite game, the concept is a bit different from your usual shooter – especially when you crank up the difficulty to "Sniper Elite". Standard run and gun tactics will get you killed. Ammo for your machine guns is ludicrously low and the targeting system and damage output for this style of gunplay have been built to be deliberately obtuse and ineffective. You either sneak around and get in very close with your Welrod (read: a WWII silenced pistol that's useless beyond spitting distance) or you go long range. 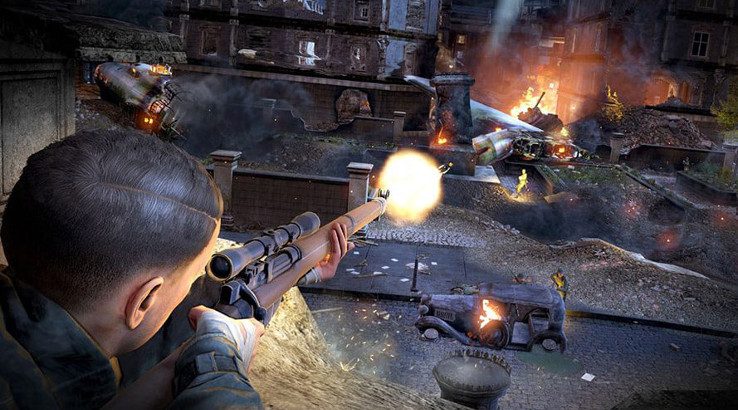 Sniping, as you'd expect, is the way to go 90% of the time. It takes some skill, too – you need to consider bullet drop, wind, breath control and moving targets need to be led correctly. Think of it as golf but with a high-powered boomstick instead of a 3-wood. Nailing that hole-in-one shot – the hole being somebody's eye socket – is as gratifying as it is ghoulish.

Providing you can keep them at a distance, even a pack of goose-stepping grunts are no match for you. The only time you'll not feel like a wolf let loose in a day care is when a tank shows up, or if you get pinned down by a mounted machine gun or an enemy sniper. Destroying these targets skilfully – by a shot into a petrol tank lid, ammo box or right through their scope – is endorphins plus. I also challenge you not to smile when you get a two-for-one headshot that burrows a bullet through four sets of ear canals. That's even better if you've timed the shot to a loud environmental sound (so nobody else gets alerted).

These moments are so pleasing, you'll begin to accept the many other rough edges in the experience. The enemy AI, for example, didn't look like it had changed much in my side-by-side play-through comparison. Hitler's finest don't always have self-preservation on their mind. They also aren't spatially aware – taking every opportunity to hunker down in ground zero distance of any incidental explosive object. It doesn't matter where you're fighting – linear streets, wider outposts or claustrophobic warehouses – explodable red stuff has been left lying about by the Nazis. Terrible OH&SS standards. 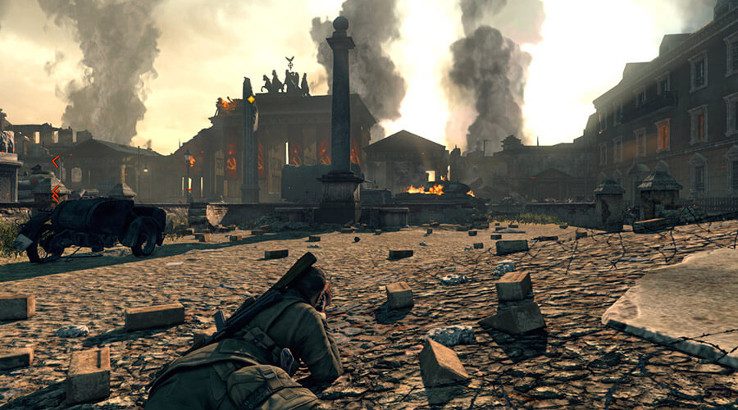 Along with shooting that stands up reasonably well, this Remastered edition includes a few other bonuses. You get the expected options like HDR, a toggle to either prioritise frame-rate to 60fps or visuals, and a decent photo mode. Unlike the PS3 version, you can also start the game with all of the weapons unlocked, there are a bunch of skins that offer characters from future Sniper Elite games and I saw a new toggle to "make kill-cam more frequent". Why it's not on by default is beyond me.

Anybody out for a unique online experience can also indulge in the criminally under-loved multiplayer mode that expands the player count to 16. It boasts seven modes (like Deathmatch, Distance King, Dogtag Harvest and Capture the Flag). Admittedly, while I love it, playing in a multiplayer mode specifically designed for camping isn't for every temperament. I'd also not dare to hope that these servers will be flush with players for very long. So get in quick.

Beyond that, there's not much to say about Remastered. In terms of reasons to return and visual polish, it delivers just enough but won't blow your mind like a shot to the frontal lobe. Some old problems persist. I still hate that there's no shoulder swap button – you're just outright screwed on certain types of corners. And all the texture upgrades haven't solved some unsightly animations and physics. While strafing and aiming, Karl looks like he has the rubber-banded waist of a He-Man action figure, for example. 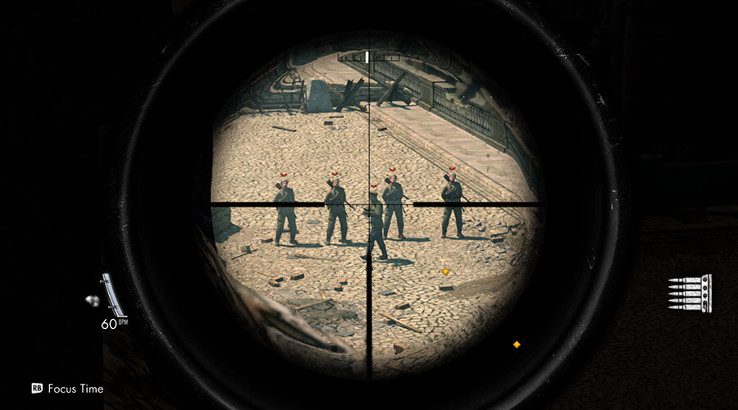 I also got shafted by some dodgy collision detection that hasn't been addressed by the level designers. I'd take a shot with my Welrod only to have it hit an invisible lip on a piece of cover. Conversely there were far too many times when I was watching enemy fire lance straight through a solid concrete wall to hit me in the face. That's a pretty ignominious death on Sniper Elite difficulty, let me tell you.

These legacy issues combined with a relatively short run time make this Remastered package a difficult sell for modern gamers. Yes, the shooting is fun, and the joy is still doubled in co-op mode, but everything that's here has been done better in Sniper Elite III and Sniper Elite 4 (and both are now budget priced to sell).

While I had fun looking back down along memory lane (to shoot some fascists hiding down said street), there's just not enough new here to warrant pulling the trigger on a purchase. This is a day one for the diehards and nostalgiaholics only. If that's not you, exercise some textbook sniper patience and wait this out for a budget price

Rebellion hasn't aimed as high as it could have with this remastering. Yes, the game looks exceedingly better than we remember it and the sniping holds up well, but the bonus materials are a low ammo affair.