LIFX: Everything you need to know

In September 2012, LIFX launched on crowdfunding site Kickstarter with the promise of reinventing the light bulb. It raised US$1.3 million in just six days, quickly garnering the attention of leading venture capitalists and has since gone on to become a major manufacturer of smart bulbs globally.

How is LIFX different to other smart bulbs?

LIFX’s main competitors include market leader Philips Hue, but what separates it from its contemporaries is that it doesn’t require any additional hardware – all of the intelligence is built into the bulb itself. The LIFX bulbs simply connect directly to your home’s Wi-Fi network. However, the LIFX bulbs themselves retail for the same price as the Philips Hue coloured bulbs; since they don’t rely on a separate dedicated hub, it’s less expensive to set up.

Another reason why LIFX has caught on is due to the brightness of its bulbs. Philips Hue bulbs put out 800 lumens at the brightest setting - the equivalent of a standard 60W incandescent bulb - while a LIFX bulb can output a maximum of 1,100 lumens – the same amount of light you would expect to see in a 75W incandescent bulb. Basically, the more lumens, the brighter the light.

LIFX bulbs can be controlled via a dedicated smartphone/tablet or with your voice using either Amazon Alexa or Google Home.

LIFX has recently released an update (as of 3.8.1 LIFX app update) which adds HomeKit support for LIFX, LIFX GU10, LIFX Downlight, and LIFX+ bulbs. It's only the third-generation bulbs that work with HomeKit – original bulbs and LIFX White 800/Color 1000 won't work, nor will the company's LED strips.

LIFX recently jettisoned white-only bulbs from its product line to focus exclusively on smart bulbs that can generate a wide range of colours. So regardless of the LIFX bulb you buy, you can rest easy knowing you’re getting a smart bulb that can not only generate different temperatures of white but also 16 million other colours.

Remember that smart bulbs come with standard fittings (bayonet cap, Edison screws, etc.) so be sure to pick the right fitting base for your household.

Keep in mind that LED smart bulbs like those sold by LIFX and Philips Hue are substantially more expensive than traditional incandescent bulbs but they consume significantly less energy and last a lot longer too, with a rated lifespan of 25,000 hours. This translates to 22.8 years based on 3 hours of daily usage. 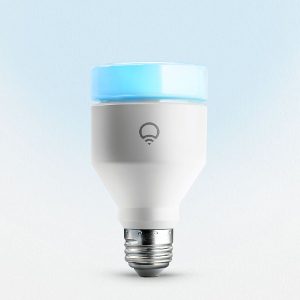 The LIFX A19 shares the same specs as all the other LIFX bulbs listed here including the ability to change the colour temperature from a warm and inviting soft glow of 2,500K all the way up to a harsh 9,000K with a maximum brightness output of 1,100 lumens. LIFX smart bulbs are capable of generating 16 million different colours and it can be put to a schedule so that the lights can, for instance, automatically change colour to match the time of day.

One A19 light bulb will set you back $90; however, LIFX also sells them in packs of two (Starter Pack), four (Living Pack) or six (Master Pack) at a discounted rate. 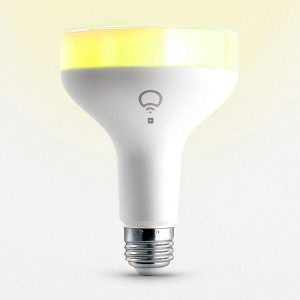 LIFX PLUS A19/BR30 with Night Vision

The A19 PLUS boasts all of the features of the A19 but with the addition of a 950nm light to help enhance the vision of a camera. Effectively, the A19 PLUS emits an invisible infrared light whenever the bulb is turned off which would make it a handy addition for a home security camera setup as it enables it to see in the dark.

The BR30 variant of the LIFX PLUS is a little bit longer in shape and is designed for recessed lighting fixtures.

The price for a single LIFX PLUS is $109.99 but you can save yourself some cash if you buy them in packs of two (Starter Pack), four (Living Pack) or six (Master Pack). 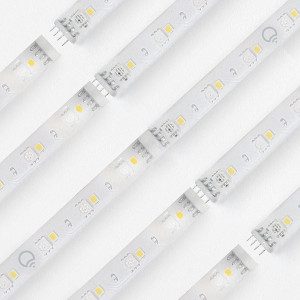 The LIFX Z is a two-metre flexible strip of small LED lights that can be shaped around corners and there’s an adhesive tape on the back to attach it to any solid surface. It’s typically used behind a desk or an entertainment centre where the light is then bounced off the wall to produce a colourful glow. It can also be used to integrate into furniture, under kitchen cabinets or highlight architectural features with smooth indirect light. Extension strips (sold separately) can be attached for longer runs.

The LIFX Z is largely comparable to Philips Hue Lightstrip Plus, but it does offer a few advantages of its own. LIFX Z doesn’t need a bridge or a hub plugged into your router and also gives you more control over the lights on display with individually programmable colour zones, allowing for a more intricate light show.

Note that LIFX Z requires power so it will need to be installed near a wall outlet.