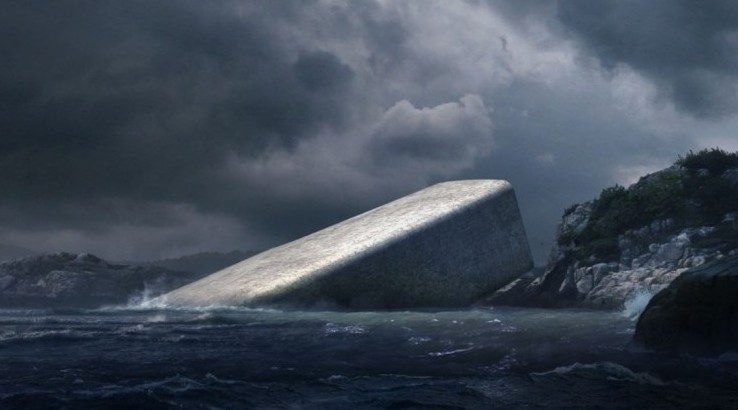 Subtlety isn't on the menu.

The next biggest thing to appear in Europe has been revealed and it comes in the form of an underwater restaurant. To get there is no mean feat with establishment located a solid 5 hours from Norway's capital of Oslo in the seaside village of Båly in Lindesnes.

Its designers, the New York-Norway architecture firm Snøhetta, describe it as "Europe’s very first underwater restaurant" and a tribute to the wildlife and rugged nature of the area.

It's not just a restaurant though. The location will also double as a marine research station, and triple as an artificial shellfish reef, which will hopefully become lush enough to draw more marine life, help purify the water and simply keep the window clean.

Appropriately, the new establishment will be named Under. If that name seems a little on the nose, you might be relieved to hear that in Norwegian it can apparently be just as well translated into "Wonder."

Both might be suitable names, with the firm's designs showing a hulking, monolithic exterior rising from the waves, subtle as the sledgehammer it resembles. But take a closer look and a lot of thoughtful design elements emerge. Not unlike the deceptive sensitivity of a seemingly invulnerable marine ecosystem, if you will.

You'll need to descend three floors to the seafloor restaurant level, and each stage of your entry has been designed with a colour palette to resemble the transition from dry land to seafloor.

You start off in the woods, with an initial entrance done in untreated locally-sourced oak that gradually fades to grayish tones as you move to the rock pools and enter the top level wardrobe area and coatroom.

"On a day of rough sea, you can feel a hint of fresh, salty ocean spray against your face as you enter the restaurant," Snøhetta advises. 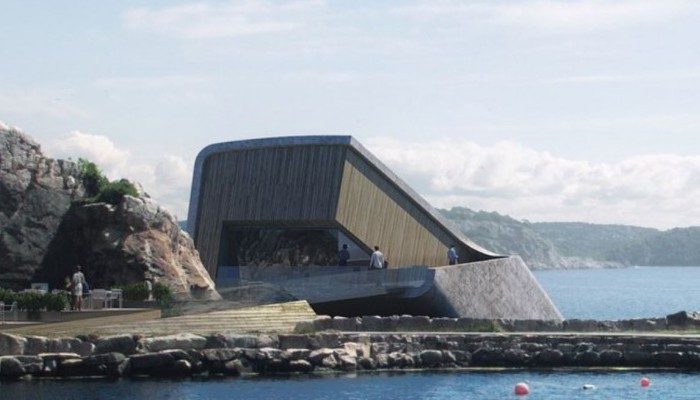 Go down another level and you're at the champagne bar, where the shoreline meets the sea. The decor here will be subdued, and chosen to evoke the sediment of shells, rocks and sand in this area. A vertical window that runs down the entire length of the restaurant will let you see the transition for yourself, and take in the full gradient from top to bottom.

You can also look over the restaurant from the bar area. Kind of like a bottom-feeder eyeing its next meal.

The restaurant proper will be more subdued yet, submerged in relaxed and oceanic dark blue and green. The warm oak finishes will have you feeling right at home though, with Snøhetta promising that the materials will be chosen "not only for their aesthetic qualities, but also for their sustainable characteristics and ability to create a good indoor climate."

The menu has yet to be revealed, but it's safe to assume that seafood will be found on both sides of the window. 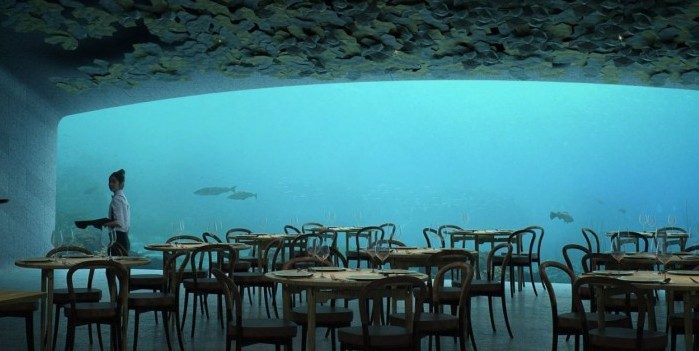 According to design magazine Dezeen, the research in the area will specifically be centered around observing fish behaviour in different seasons, and looking at whether or not it's possible to train wild fish with sound signals.

It's an ambitious sounding project, and Snøhetta's first foray into underwater architecture, but Oslo has become highly regarded for its architecture with Snøhetta designs like the city's famous opera house often taking centre stage.

Norway's known as a pricey destination though, and this kind of establishment probably won't change any minds. On the upside, the Norwegian krone has been declining against the Aussie dollar lately, and flights to Scandinavia will be getting a lot cheaper and more numerous in the coming year.

There's no official date of launch quite yet, it's never too late to start considering that trip to Norway in anticipation.