Samsung’s Note10 launches with multiple models but no headphone jack 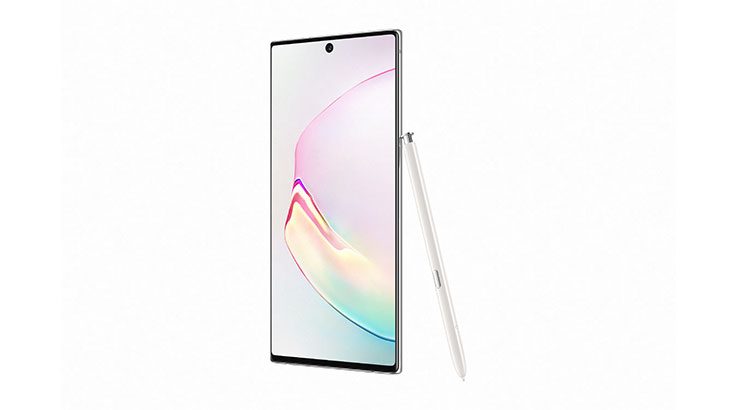 Samsung's new Note tries to tempt with multiple sizes and 5G options, but the headphone jack is nowhere to be seen.

Much of what was announced had been heavily leaked in the weeks prior to the event, including a full leak of most of Samsung's marketing materials just a day prior to the launch.

As usual, it's the S-Pen stylus, and what Samsung's including with this year's productivity-centric smartphone. This year's new feature is "Air Actions", which allows you to activate the Note10 from a distance.

The S-Pen will also work with AR applications, with Samsung demonstrating a AR Doodle app in its launch. Samsung says it's opening up the Air Actions SDK to external developers, so you may even see new actions from third party apps later on.

Samsung's also doubling down on the capabilities of the Note 10 for serious content producers in the video and photographic spaces. The Galaxy Note 10 packs in 3 cameras at the rear, with an ultra-wide 16MP, wide angle 12MP and telephoto 12MP sensor. Samsung ups the camera count to 4 for the Galaxy Note10+ with 16MP ultrawide, 12MP wide and 12MP telephoto, joined with a VGA "DepthVision" camera for more accurate photo taking. 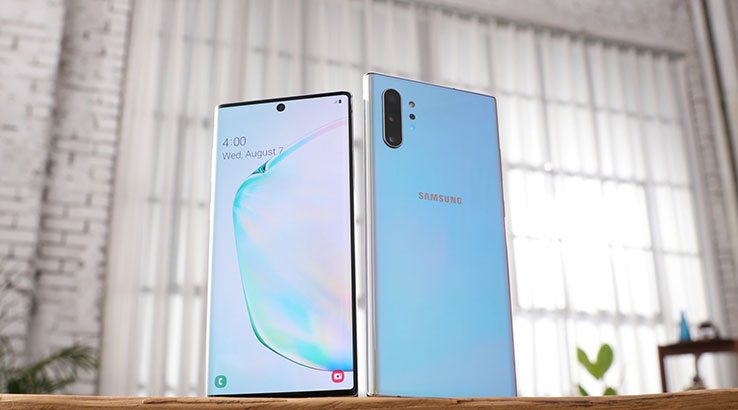 On the video front, the Note 10's cameras will be boosted with live focus features and microphones that Samsung can zoom in on the subject in focus, making for a clearer experience for video viewers.

It's not all good news on the audio front, however, with the Galaxy Note10 being the first Samsung flagship phones to ditch the 3.5mm headphone jack. If you want wired headphones, you'll have to use a USB-C adaptor. That doesn't bode well for Samsung's long-term commitment to headphone jacks in future phones.

There's also storage variance at play, with the Galaxy Note10 only supporting nanoSIM cards, where the Note10+ and Note10+ 5G offering the option to use a secondary SIM or microSD card for storage expansion.

On the power side, the Note10 will come with a 3,500mAh battery, while the Note10+ and Note10+ 5G will pack in 4,300mAh of power. The wireless powershare feature of the Galaxy S10 family is present, with Samsung also pitching "Super Fast" wired charging, up to 45W, although that's from a charger you will have to buy separately.

The Samsung Galaxy Note 10 will go on pre-sale in Australia from 8 August.

Telstra's already announced its pre-order offers, with customers taking up the Note10+ able to get the Note10 5G for the same asking price as long as you stay on contract for at least 24 months.

Optus will also offer the Samsung Galaxy Note10+ and Galaxy Note10+ 5G on contract terms. Optus has yet to fully launch its 5G network for consumers, so it's not clear if it'll do so in time for the Note 10+ 5G's availability date.

Vodafone will offer the Galaxy Note10 and Galaxy Note10+ on contract terms, with a bonus offer of one month's plan fees waived if they pre-order. Vodafone's the only Australian launch carrier offering the smaller Galaxy Note10, but it's also the only one not offering the Note10+ 5G.

Telstra, Optus and Vodafone will all bundle a pair of AKG N700 headphones as a pre-order offer with any contract plan.

Samsung hasn't been slow in releasing phones this year, with the entire Galaxy S10 family, its mid-range Galaxy A series phones and the Galaxy Fold still set to make its debut in September. Although with the Galaxy Fold, the exact Australian availability date is yet to be announced.

Samsung also announced a new Qualcomm-powered laptop, the 13.3 inch Galaxy Book S, which Samsung Australia says will launch in Australia at a later date, with pricing to be confirmed closer to launch.