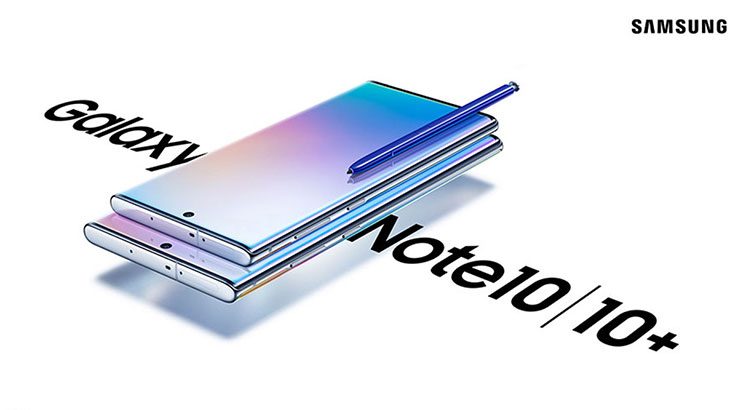 Samsung's flagship Galaxy Note 10 smartphones want to be much more than just devices for making calls.

The official launch for the Samsung Galaxy Note 10 and Galaxy Note 10+ isn't until 6am tomorrow Australian time, but it seems like there's not all that much still to announce, thanks to a healthy stream of leaks, capped off today by marketing materials cited by Droid Life.

So how do you make the Galaxy Note 10 stand out? Samsung's pitch is going to be around it being a "computer" for all of your everyday tasks. Samsung's marketing materials as leaked suggest it's going to be "a computer that's a gaming console, that's a film studio, and an intelligent pen, all in one device".

That fits with the history of Samsung's Galaxy Note devices, which have long sold themselves as "productivity" phones.

Both the Note 10 and Note 10+ will feature a single round "hole punch" style front facing camera and almost no front bezels according to the leaked images. The cameras are pitched as "pro grade" with the addition of audio zoom microphones that can focus on your camera's focus point for more accurate sound recording – at least in theory.

As for the S-Pen, where last year's Note9 talked up its ability to work as a remote Bluetooth shutter, Samsung is stating that this year's S-Pen is a "magic wand" capable of air gestures for control, photo clipping and handwriting recognition.

Samsung sits alone in providing a smart stylus for a smartphone, so it's essentially competing with itself to come up with new features each year.

The Galaxy Note 10 will feature a 3,400mAh battery while the larger Note10+ will run on a 4,300mAh power pack. The new feature here appears to be what Samsung is calling "Superfast Charge", claimed to provide hours of power from just a few minutes of charging time. Samsung is not alone in the high-capacity charging space, with phones from competitors such as Huawei and Oppo especially having quick charge capabilities.

It will be interesting to see how the Note 10 and Note 10+ stack up in this regard, especially given the relatively meagre battery performance we've seen out of Samsung's flagship Galaxy S range phones this year.

It's already been heavily rumoured that the Note 10 family will be Samsung's first flagship phones to drop a standard 3.5mm headphone jack, so if you're keen, get used to using either Bluetooth headphones or an adaptor for your music needs.

We'll know more tomorrow of course when Samsung formally unveils the Galaxy Note 10 and Galaxy Note 10+. Hopefully, there are still a few more surprises in store.