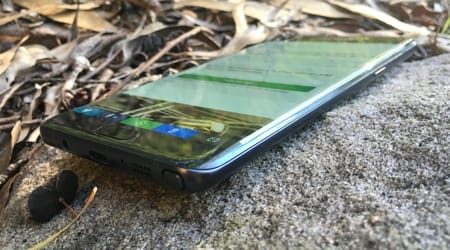 The Samsung Galaxy Note 7 has been temporarily removed from sale in Australia, apparently due to concerns about exploding batteries in the freshly launched smartphone. Updated: Samsung Australia will repair, replace or refund Note 7 owners.

Update: Samsung has indicated in South Korea that it will issue a global recall of the Note 7 device.
In Australia, however, it will advise customers as to whether it will offer repairs, refunds or replacements, which isn't quite a full recall offer.

Samsung has only just launched the Galaxy Note 7, but it now appears to be pulling the phone off retailer and telco partner shelves, as well as from its own web store. Try to buy a Note 7 directly from Samsung right now, and you’re told they’re "Temporarily Out Of Stock". Telstra lists them as "Out Of Stock", as does Vodafone, while Optus is listing them as "Temporarily not for sale".

The issue appears to relate to concerns raised after a number of Note 7 devices in South Korea reportedly caught fire, leading to the manufacturer halting sales of the device in that country before issuing a full recall.

Any phone catching fire is a cause for significant concern, but it’s not yet clear what’s caused the issue, with some outlets potentially blaming third-party chargers for the Note 7’s woes. Samsung is said to be investigating the issue, hence the pause on ongoing sales in Australia.

“Samsung is fully committed to providing the highest quality products to our consumers.

“We are conducting a thorough inspection with our partners.

“We will share the findings as soon as possible.

“Sales of the Galaxy Note 7 have been paused while we investigate.”

Does this mean Samsung will recall all Note 7 phones sold in Australia?

Samsung has just issued a statement relating to the Note 7 recall issue, which reads as follows:

"Samsung is committed to producing the highest quality products and we take every incident report from our valued customers very seriously. In response to recently reported cases of the new Galaxy Note7, we conducted a thorough investigation and found a battery cell issue.
To date (as of September 1) there have been 35 cases that have been reported globally. There have no reported incidents in Australia. However, because our customers’ safety is an absolute priority at Samsung, we have stopped sales of the Galaxy Note7.
For customers who already have Galaxy Note7 devices, we will provide a resolution of their choice including a replacement, repair or refund over the coming weeks. We acknowledge the inconvenience this may cause in the market but this is to ensure that Samsung continues to deliver the highest quality products to our customers. We are working closely with our partners to ensure the customer experience is as convenient and efficient as possible. We will have an update for Australian customers early next week."

As such, it appears that Samsung isn't quite formally recalling the Note 7 in Australia, but will instead by means yet to be determined work out if models sold in Australia are susceptible to the issue and proceed from there. We'll know more next week, it seems.

As yet, there’s no sign as yet of a recall notice coming directly from Samsung or posted to the ACCC’s product recall page.

What should I do if I already have a Galaxy Note 7?

If the issue does relate to third-party chargers and you’re using one to keep your Note 7 topped up with power, it would be wise to switch back to the provided charger for the time being, as well as exercising a degree of caution. Charger issues are nothing to be trifled with, with sadly far too many instances of personal harm and even accidental death traced back to faulty phone chargers, even here in Australia.

The other practical thing to do would be to back up any personal information, be it contacts, photos/video or any other content to the cloud or another device. When the Note 7 is recalled, whether it heads back to your supplying carrier or vendor, you won't want to be giving them your data in any way.

We're closely watching this issue and will update as soon as there’s any fresh useful information.