Quick verdict: The Samsung Jet 70 Complete is not too feature-poor and not too expensive – it's juuust right. 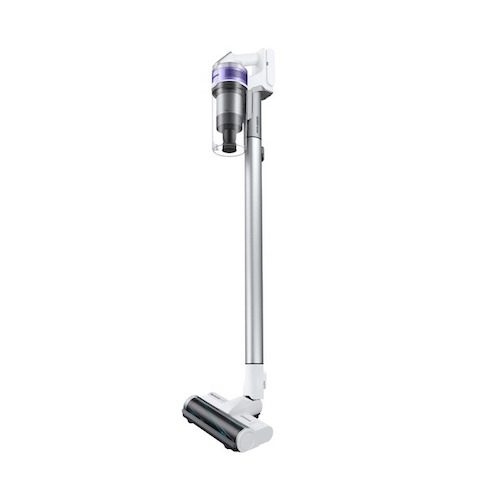 The Samsung Jet 70 Complete is the middle ground in Samsung's Jet stick vacuum line-up – with the cheaper Jet 60 below and the more expensive Jet 90 above it. There is no Jet 80, I don't know why. While the main body and power are similar in the Jet 60 and Jet 70, the bundled accessories in the latter makes the upgrade worthwhile. 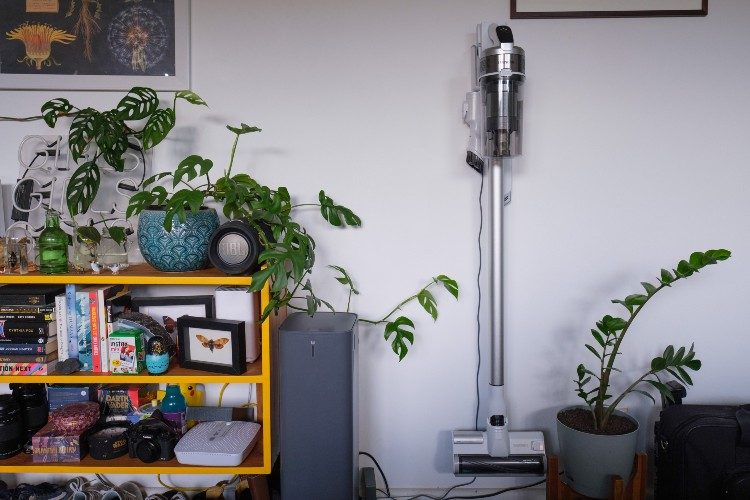 The Jet 70 is the mid-2000s iPod of the Samsung Jet line-up, when everything was white and nothing hurt. From head to toe, you get the same style body and accessories that come with the other Jet vacuums. Personally, I'm not a fan of a white vacuum. It feels like it will show grubbiness more easily and a vacuum is made for grubbiness, but I wouldn't pick colour palette over function.

It feels fairly durable with solid connections and thick plastic. There's something deeply satisfying about it the way it clicks into the wall dock. It's the kind of thing that makes my monkey brain shiver. The rounded butt of the battery feels weighty as it slides in and cradled oh so nicely by the dock. Plus, it subtly helps encourage you to put that bad boy back on charge after each use.

It's a sleek-looking machine with a comfortable ergonomic grip. There's an LCD screen that shows your power level, as well as alerts for blockages. It's operated with an on/off button and 2 buttons to increase/decrease power. I quite like the on/off system over a trigger system, as holding a trigger down can get tiring, and the buttons are comfortably placed.

The design is much the same as the rest of the Jet series but is still clearly the middle child. It weighs in at 2.6kg – a hair lighter than the more expensive Jet 90, and a touch heavier than the cheaper Jet 60. In real-world usage the weight difference isn't very apparent, though the Jet 60 was more cumbersome to move across carpets due to the more basic Jet Fit brush not gliding as freely. 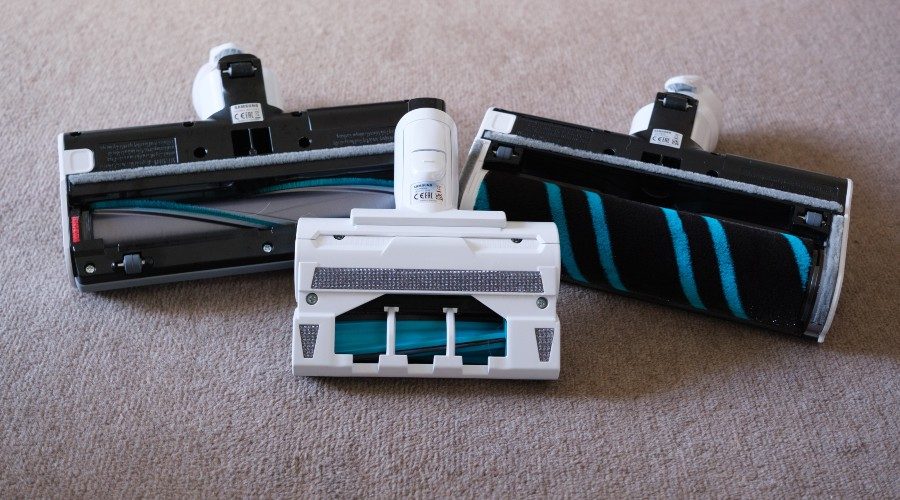 Despite being called the Jet 70 Complete, it does not come with the complete suite of compatible accessories and lacks the Spinning Sweeper included with the Pro model. However, it comes with 5 attachments and a charging wall dock that holds 2 additional accessories. Given that these attach side on, with the clip parallel to the wall and the bottom of the tool facing inward, you can't store wide accessories such as a floor head. It's more or less designed just to hold the Combination tool and Extension Crevice tool – leaving your Mini Motorised tool and whichever floor head you use the least to fend for themselves. You may as well almost throw out the Mini Motorised tool as I found it barely worked, leaving considerable debris behind when I used it to vacuum the car.

While they're a rather standard fare nowadays, the washable filter and bagless dustbin are a welcome feature. However, removing and replacing the dustbin for emptying can be quite fiddly. The process is prone to leaving dusty sprinkles strewn on the floor due to a hole that becomes exposed between the intake and the dustbin. Even when used with the Samsung Clean Station, which is designed to make emptying the dustbin a more tidy affair, this hole is still a problem. 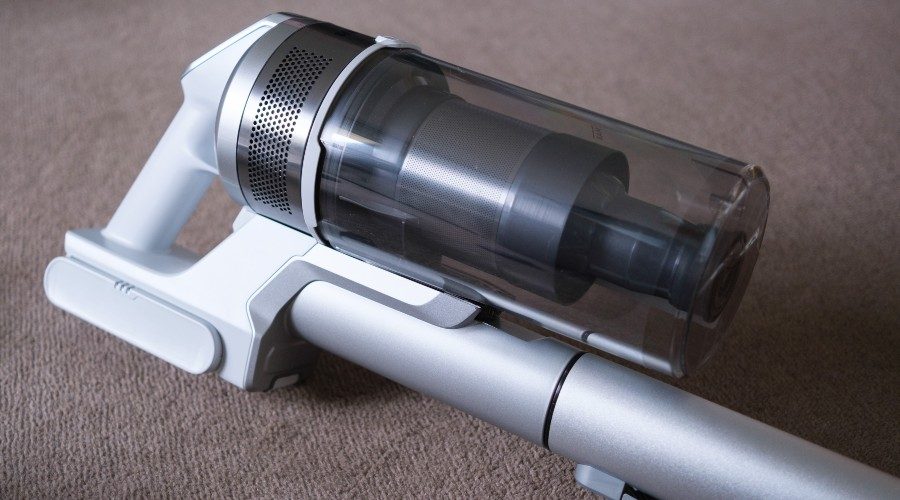 The Jet 70 has the same 150W motor as the Jet 60. You'd be right to ask, "If the motor's the same, why wouldn't I get the cheaper model?" That's mostly down to the inclusion of the Soft Action and Turbo Action brushes, which replace the Jet 60's Jet Fit brush.

The Jet Fit brush was a major sore point for me with the Jet 60, but the Soft Action and Turbo Action brushes cost $149 each, meaning it's perhaps economical to get the cheaper machine and a separate floor head. With the Jet 70 you get both floor heads for $200 more. Of course, this may vary with whatever sales you manage to shop. The LCD screen on the Jet 70, isn't a reason to upgrade but it is a nice bonus.

With the Jet 70's improved floor heads the vacuuming experience is quite transformed. The more specialised brush bars do a better job cleaning and are also easier to use. The Jet Fit brush had problems with manoeuvring and suctioning onto the carpet, as well as being a collection point for hair rather than a temporary stop on the way to the dustbin. These issues are less prevalent on the upgraded heads. Hallelujah.

But even with better performing floor heads, the suction of the Jet 70 is still only okay, and probably better suited to hard floors rather than carpets where debris can work its way down. When compared to more expensive vacuums – like the Jet 90 or Dyson V10 – the difference is stark, but the Jet 70 doesn't claim to be the most powerful out there and the saving is substantial. 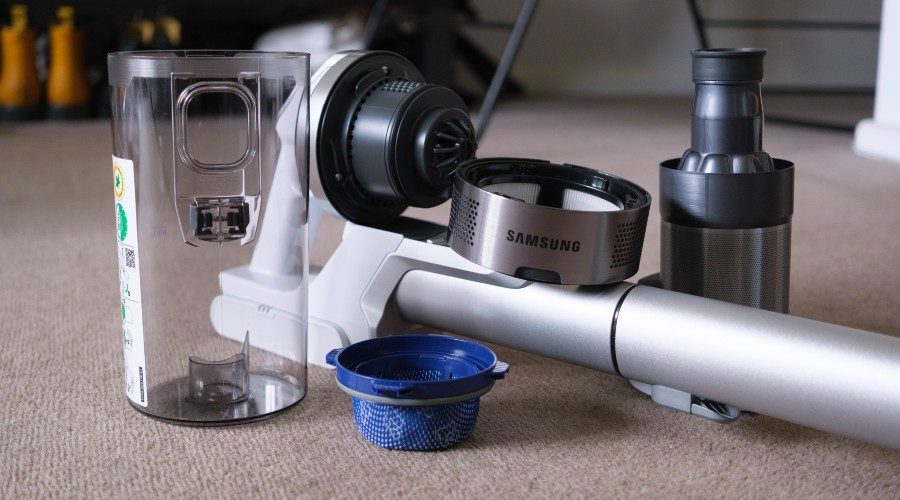 Car cleaning is unsatisfying with the Jet 70. In my opinion, it's largely the fault of the Mini Motorised tool doing an insufficient job at sweeping up debris despite being the best tool for the job. The rubber ridges replace a traditional brush system, which ends up feeling like using a squeegee to sweep your floor. 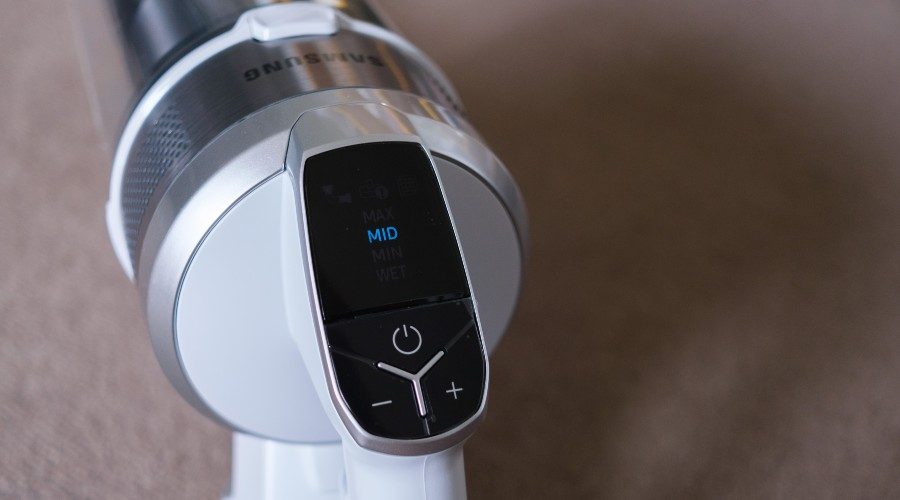 Battery performance is identical to the Jet 60, which makes sense given the motor is the same and they appear to have the same battery. You can expect a little more than the listed 5 minutes on max and 20 minutes on medium with a fully charged, fresh battery. Samsung claims 40 minutes of run time on the lowest power setting, but given the modest power of this vacuum, I didn't find low all that useful.

Charging takes about 3.5 hours, which is a long time for 6 or so minutes of vacuuming glory, but I found I could comfortably clean my 2-bedroom apartment before the battery ran flat. The Jet 70 has swappable batteries that click in and out very easily, but given the high price of a spare and the fact you have to charge it in the dock, it's not a viable option for most people. 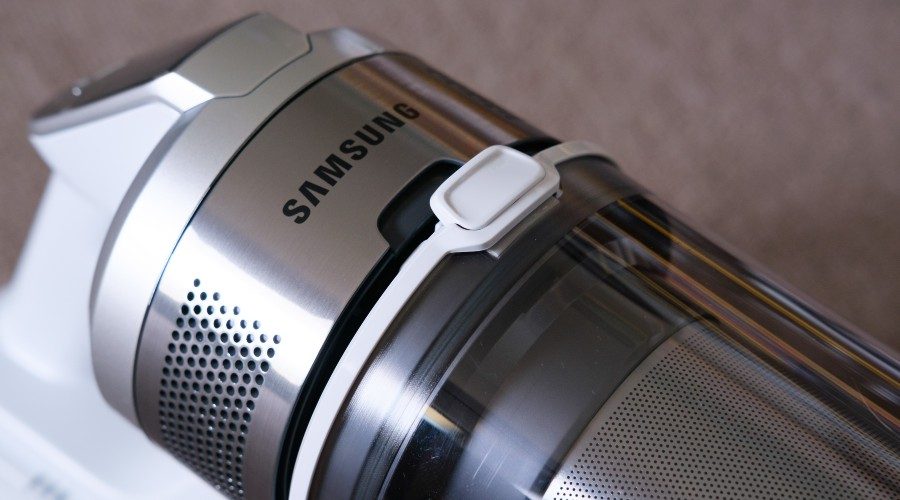 The Samsung Jet 70 Complete is a solid offering, though I do long for a bit more suction power, especially when compared to a Dyson. But if your budget can't stretch to a Dyson, even an older one, then this is a great option to consider. In my opinion, it's the vacuum of choice in the Jet line-up for its performance and value.

The Samsung Jet 70 Complete was tested in a 2-bedroom, low-pile carpeted apartment inhabited by 2 long-haired people, a long-haired dog and a cat. Hard floors tested were tile in the kitchen and on a balcony. It was also used for car cleaning. Testing was done over a period of weeks, with daily vacuuming. Yes, I vacuum every day and you should too.