Apple and Samsung are bitter rivals, so how do their flagship phones compare?

Samsung has just announced the Samsung Galaxy S8 smartphone. It’s the South Korean manufacturer’s key smartphone for 2017 as it tries to look past the disastrous Galaxy Note 7, but also as it continues to take the battle to bitter arch-rival Apple.

For its part, Apple announced the iPhone 7 on 8 September 2016, which is a fair span of time in the fast-paced world of premium smartphones. It has been a wild success for Apple, at least partially reversing the trend towards Android phones worldwide and seeing strong sales here in Australia. How does it compare against Samsung’s brand-new phone?

There was a time when Samsung’s cameras simply didn’t compare with the optics that Apple threw into its smartphones, but in the past couple of generations it’s been pretty much neck and neck when it comes to general smartphone quality.

While the larger iPhone 7 Plus features a dual lens array, you won’t find that on the smaller iPhone 7, and similarly while a whole range of Android phones this year have gone down the dual lens road, Samsung is not one of them.

As such, while both manufacturers talk up the quality of their cameras, and we’re happy with the iPhone 7’s quality, the jury is still out on how well the S8 competes.

There’s a huge size and resolution gulf between the two phones, and even a technology difference, with Apple opting for a smaller, lower resolution LED while Samsung chose a curved high resolution Super AMOLED display. On a pure numbers count Samsung would seem to have this one in the bag, but there’s more to a decent display than just the raw figures.

Apple’s strict quality control has generally meant that it has screens with superb colour balance and clarity, but the secret sauce here is that the tight control it exercises over both hardware and software means it can eke a lot out of a little. By comparison Samsung has to work within the constraints of Android and rely on developers writing apps that speak natively to its chosen screen resolution. That’s not always the case.

There’s also the challenge of that curved edge display. Samsung has had curved displays for some years now, and while they’re aesthetically very pleasing, the company has yet to come up with a killer reason why consumers should care about them. Simple fast loading of contacts and apps isn’t really enough, because it’s often harder to access the side screen than it is to just tap or slide to the same end effect. Samsung has opted to do without a dedicated home button in order to allow for more screen display space, but again that’s a matter of compatible apps working properly with it. 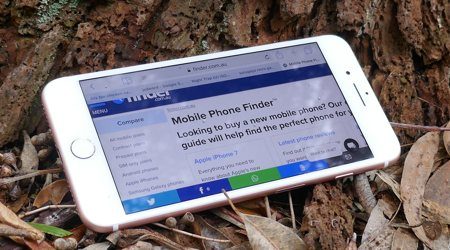 Android has come along in leaps and bounds in recent years, erasing much of the huge gap that used to exist between it and iOS. For almost any task across most fields there’s an app for you to use whether you opt for iOS or Android.
That being said, Apple’s strict control over every aspect of the iOS ecosystem does give it a distinct leg up, simply because it can provide exact specifications for every iOS display to developers. That makes creating apps that use space intelligently much easier than with Android, where (and this is especially true for larger, higher resolution displays such as that found on the Galaxy S8) it can be a little hit and miss as to how an app will look. Add in that curved display and this could be even more pronounced, although for now we’ll have to wait and see.

We can’t give a definitive statement around the Galaxy S8’s battery life as yet, but given its core specifications and our expectations based on last year’s Galaxy S7 and Galaxy S7 Edge, it’s likely to be an absolute win over Apple’s iPhone 7.

Battery life has been a notable weak point for iPhones for years now, and it’s an area Samsung has been able to easily dominate in. While we’re yet to formally battery test the Galaxy S8, it will be a massive disappointment if it fails to best the iPhone 7’s meagre battery life.

Both the iPhone 7 and the Samsung Galaxy S8 are premium phones that attract premium price tags. While Samsung has gone head to head with Apple on pricing in recent years, it has been quite aggressive on the price front in Australia. It will sell outright for $1199 from 21 April 2017. That does mean that the entry level iPhone 7 is a touch cheaper, but the two higher storage tiers are more expensive, and that’s with fixed storage devices.

That also has a knock-on effect if you want either handset on contract, because Apple's devices attract slightly higher handset repayments over the life of the contract. The flipside of that is that typically Apple's iPhone models tend to attract higher prices on the resale market, while most Android phones tend to crash heavily in resale price terms.