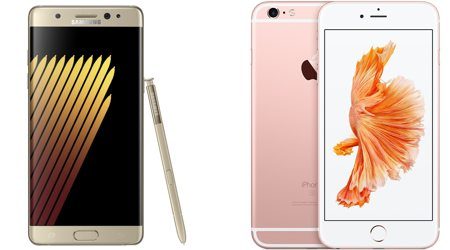 Samsung has been in the large screen phone game for quite some time now; while the Galaxy Note 7 isn’t in fact the seventh iteration of its Note concept, thanks to it skipping over the Note 6 entirely, it still has considerable form in the "phablet" space.

Apple, conversely, has only sold two generations of its large screen iPhone in the form of the iPhone 6 Plus and the iPhone 6s Plus. Both generations of its larger screened iPhone have been large scale sales successes individually, but at a time when overall iPhone market share has been squeezed considerably by Android sales. iPhones are still very popular in the market, but they don’t enjoy the dominance they once had.

Apple is widely expected to replace the iPhone 6s Plus with its next generation iPhone sometime in the September/October timeframe, but right now, it is competing directly with the Galaxy Note 7, which will launch in Australia on 19 August 2016, well before Apple announces anything new at all in the iPhone space.

SAMSUNG GALAXY NOTE 7: Everything you need to know

So how do the two large flagships compare?

At a base specification level, there’s not quite as much between the two devices as you might think:

The numbers don’t quite tell the full story, however, because there’s a wealth of other features to take into consideration.

The Note 7 runs on the same essential camera hardware as the Galaxy S7 and Galaxy S7 Edge, and if we were putting that camera up against the iPhone 6s Plus camera, the S7 would take it by a fair margin. That’s to be expected for a phone that’s almost a year newer than the iPhone 6s Plus as well.

Which isn't to say that the camera on the iPhone 6s Plus is terrible. The reality of smartphone cameras in the premium space is that they're already pushing what's feasible in lenses and bodies of this size, and it's perfectly possible to shoot very good photos with either device, or, conversely terrible photos depending on your circumstances and level of photographic skill.

We’ve not had the opportunity to test out the Galaxy Note 7’s battery life to speak of, but Samsung has exceptional form in this field as well, and the larger size of the Note 7 means it can pack in a battery that even shames the Galaxy S7 Edge. We’re expecting big things out of battery life in the Note 7 in other words.

The iPhone 6s Plus is Apple’s best performer in battery life terms, and it’s easily capable of a day’s battery life, but not that much more. Apple still has considerable work to do in the battery space to catch up to much of its Android brethren, which will hopefully happen in the next generation of iPhone hardware.

Galaxy Note 7 vs iPhone 6s Plus: What about the apps?

Here the comparison is a lot tougher. Samsung has done some interesting things in the Android space, but the reality of Android on larger screened devices has always been a bit mixed. Not every app is optimised for larger displays, which can lead to odd screen effects overall. Given the huge variance in screen sizes and resolution across the entire Android ecosystem that’s not entirely surprising.

Apple, meanwhile has kept a tight grip on iOS screen sizes, resolutions and indeed the operating system itself, and that’s meant a library of apps that’s generally well optimised for larger screen devices.

Straight app number comparisons aren’t terribly useful here, because while one platform or another might have a numerical superiority, the reality is that you’re only likely to really have a handful of apps on your phone at a given time. All the really big players in the app space deliver across Android and iOS these days, so it’s often a matter of personal taste.

Samsung has very quickly announced outright pricing for the Galaxy Note 7, which will sell for $1349 when it launches on 19 August. Early pre-orders will score a 256GB microSD card to seriously expand its storage credentials.

Apple, meanwhile, maintains a strict premium pricing policy across all of its iPhone range, and the iPhone 6s Plus’ position at the top of the family means it commands the highest prices, ranging from $1229 for the 16GB model all the way up to $1529 for the 128GB version.

That might appear to put the iPhone 6s Plus in the command position, were it not for the fact that the $1229 pricing buys you a meagre 16GB of storage, and the iPhone really doesn’t extend its storage in any meaningful internal fashion. You can buy external drives to stream content to iOS devices, but there’s no microSD card slot in any iOS device. The next step up, the 64GB iPhone 6s Plus costs $1379 outright.