The Galaxy J3 brings a 5-inch super AMOLED display, a quad-core processor and an 8MP camera to Samsung's line of budget smartphones.

Launched in early 2016, the original Galaxy J3 joined Samsung's growing catalogue of J series smartphones aimed at those looking for an affordable alternative to the company's flagship Galaxy S handsets. Like other J series phones, the Galaxy J3 pares down many of the features common to Samsung's premium handsets in order to keep costs low. This limits the Galaxy J3's suitability to those who use their phone primarily for calls, texts and light web browsing. Those looking for a powerhouse device to play games or multi-task on will probably want to consider something with a bit more grunt. 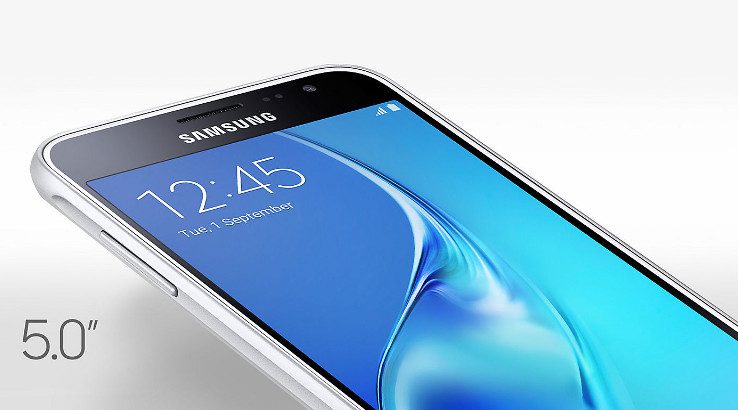 Samsung's approach with the Galaxy J series is to focus on accessibility over complex features, and this is immediately apparent from the Galaxy J3's design. It follows the standard smartphone template to a T, with its 5-inch screen underlined by three physical buttons rather than the virtual buttons newer smartphones have started using. That screen is one of Samsung's popular super AMOLED displays, boasting brighter colours and keener contrast than a regular LED screen. However, resolution is limited to 1280 x 720, preventing the Galaxy J3 from displaying full HD content in all its glory.

Storage is another area where the Galaxy J3 cuts a few corners. The handset only comes with 8GB of storage space, with nearly half of that reserved for system files only. Fortunately, the Galaxy J3 is compatible with microSD cards as big as 128GB, so if you plan on taking a lot of photos or carrying your music collection with you, you'll want to make sure you have a suitably large microSD card on hand.

Speaking of music, the Galaxy J3 includes both a 3.5mm headphone jack and Bluetooth support for connecting a wireless headset. It also features NFC or Near-Field Communication, the short-range data transfer technology used for tap-to-pay services like Google Pay and Samsung Pay. 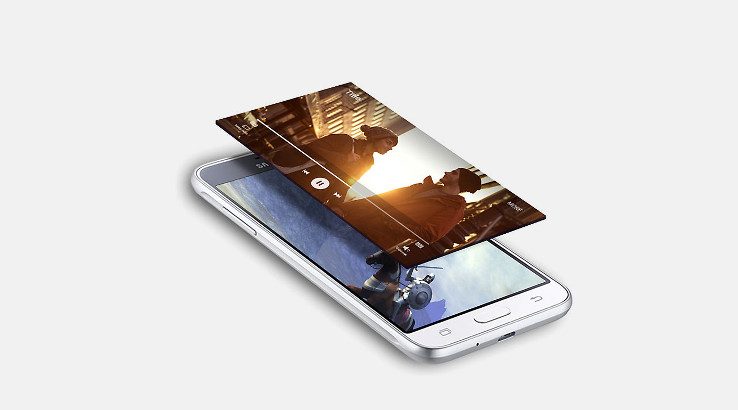 The Galaxy J3 represents a marked step up in camera technology from previous handsets in the Galaxy J series. Where the Galaxy J2 topped out with a 5MP rear-facing camera and a 2MP front-facing camera, the Galaxy J3 upgrades them to 8MP and 5MP respectively. Each is equipped with a f/2.2 aperture, and the rear camera includes an auto focus feature as well as the ability to record video in 1080p at 30fps.

Compared to Samsung's more recent smartphones, these specs aren't exactly earth-shattering, but they should be sufficient for taking decent happy snaps and selfies on the go. The Galaxy J3 also benefits from a handy camera shortcut: simply double press the home button to automatically launch the camera app rather than tapping through multiple menus.

If you're shopping for a budget handset like the Samsung Galaxy J3, it's important that you manage your expectations regarding performance. The 1.2GHz quad-core processor inside the J3 might sound impressive, but it's a good deal less powerful than the processors you'll find in most modern smartphones. RAM is on the low side, too, with the Galaxy J3's 1.5GB limiting its capacity for multi-tasking and preventing it from playing the latest 3D games.

That said, if you only plan on using the Galaxy J3 for reading the news, checking social media and other basic tasks, its low-power hardware shouldn't pose any serious issues.

On paper, the Samsung Galaxy J3's 2,600mAh battery might not seem particularly noteworthy compared to the 3,000mAh+ batteries included in most modern smartphones. However, capacity only tells part of the story. Because the Galaxy J3 is built from relatively low-power components, it chews through significantly less battery power than something like the Samsung Galaxy S9 or the Apple iPhone 8. In fact, Samsung claims that the J3 is capable of playing video for 14 hours straight, audio for 62 hours straight and will last through 19 hours worth of conversation over 3G.

The Galaxy J3 further distinguishes itself from more modern smartphones by having a removable battery rather than one sealed into its body. This allows you to purchase spare batteries and switch them out in an emergency, a handy feature for those who spend a lot of time on the road or in places with no convenient power points.

Samsung has also integrated an Ultra Power Saving mode into the Galaxy J3 for when the battery situation gets especially dire. Activating this mode turns the screen black and white and shuts down all non-critical apps, buying you extra time to make and receive calls while you hunt down a power outlet.

With Father's Day just around the corner, we're giving all you last-minute planners easy-to-order gift options for your tech-loving dad.