From the return of Bixby to a hint at the future of smartphones, Samsung's CES 2019 press conference was jam-packed with exciting announcements.

Of all the companies showcasing their wares at CES 2019, Samsung was definitely one of the most anticipated. Its press conference didn't disappoint, with plenty of new products and services slated for release later this year.

As expected, 5G formed a core pillar of Samsung's press conference at CES 2019 today. H.S. Kim, president and CEO of Samsung Electronics, touted the fact that the company was the first to receive FCC approval in America for its commercial 5G devices. He also emphasised how imminent the 5G rollout is, with Samsung working alongside mobile carriers across the US, Europe and Asia to prepare its devices for the high-speed network.

To this end, Samsung announced that it plans to release a 5G-powered smartphone within the first half of 2019. No details regarding the phone were provided, but odds are good it's the rumoured Samsung Galaxy S10.

Artificial intelligence is one of the most popular topics at this year's CES, and Samsung is just as hot on the technology as the rest of the industry. Its Bixby virtual assistant, previously restricted to Samsung Galaxy phones, is now expanding to encompass Samsung's TVs and home appliances.

No CES is complete without new TV announcements, and here Samsung delivered in spades. 8K was the buzz word this time around, with the company unveiling a line of 8K QLED sets due to release later this year. With such a high resolution, it's no surprise that the TVs themselves are massive, beginning at 65 inches and going all the way up to Samsung's largest set yet: a 98-inch behemoth.

Since 4K content is still in relatively short supply, the notion of an 8K TV might seem a little superfluous. To combat this, Samsung has incorporated AI-powered upscaling technology in its 2019 TVs, dynamically expanding standard-definition, HD and 4K content to 8K with minimal loss of image quality.

Yesterday, Samsung announced that its 2019 TVs would support Apple AirPlay 2 and the iTunes Movies and TV store. Today, it showed this off with a demonstration utilising Bixby voice control to start and stop TV shows. Voice commands can be issued to the Bixby TV remote as well as a range of other smart devices, including Samsung's own Galaxy Home, Amazon Echo and Google Home. 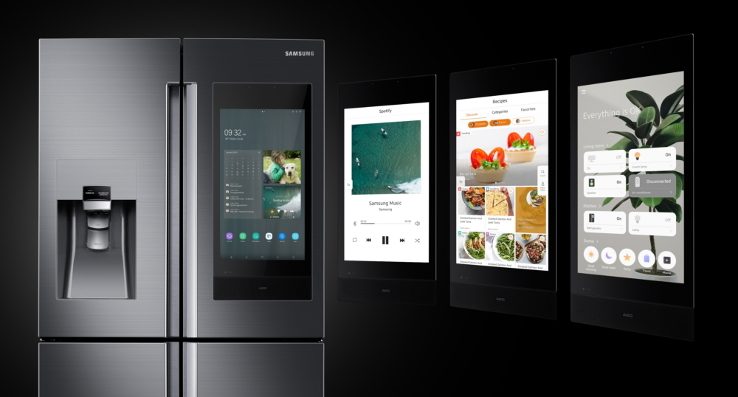 Samsung's focus on smart devices continued with a look at the 2019 revision of Family Hub, Samsung's smart refrigerator line. Effectively a fridge with a tablet computer built into its door, the new 2019 Family Hub allows users to interact with Bixby, searching for recipes, viewing family photos and making general Internet queries for information like weather forecasts. These features will also be rolled out to the 2018 models via a software update sometime this year. 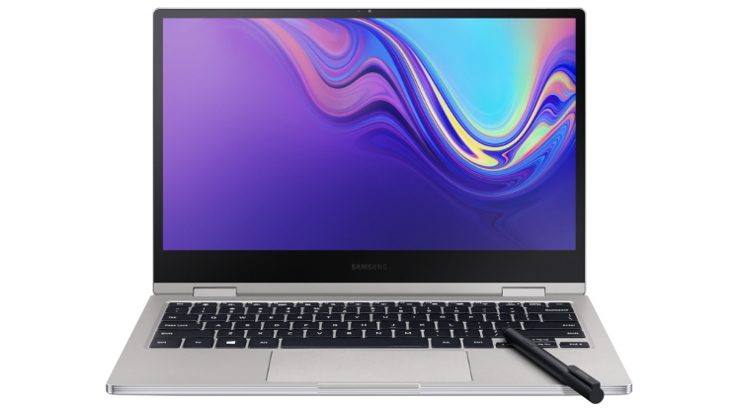 2019 will see Samsung push harder into the computing space with two new high-end laptops. For those wanting to stay productive on the go, the Samsung Notebook 9 Pro combines a sleek and light frame with the power of an 8th generation Intel Core i7 processor and 8GB of RAM. It also includes an Active Pen stylus for drawing directly onto the touch screen, providing more opportunities for artists and engineers to work while they're out and about.

The second notebook Samsung showed off was the Samsung Notebook Odyssey. Targeted at gamers, the high-powered laptop features a hexa-core Intel Core i7 processor and Nvidia's new GeForce RTX mobile graphics platform. Coupled with what Samsung claims is a "modern cooling system", the Notebook Odyssey promises to deliver top-notch gaming performance even when you're away from your desktop PC.

Speaking of desktop PCs, Samsung also unveiled its new Space Monitor, a screen designed to make the most of your desk's real estate thanks to its built-in clamp stand. This stand allows the Space Monitor to tilt back and forth and even rest flat against the wall when not in use. It also makes cable management considerably easier, as both the power and video cables are concealed within the monitor's arm.