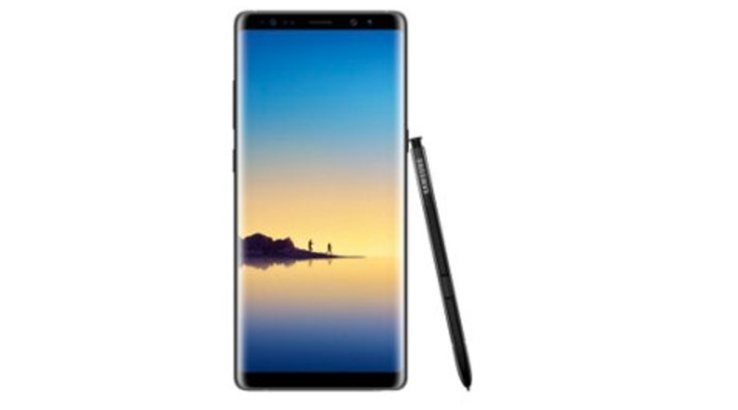 The Galaxy Note 8 doesn't replace the Galaxy Note 7, but that's because Samsung had to pull the Note 7 from the market due to the risk of fire and explosion owing to issues with its battery construction. It's a cloud that has hung over the Samsung brand somewhat, and the Note family specifically, but Samsung opted not to dwell on it in any particular way at the launch, instead launching into all the details of the new handset instead.

The Note 8 boasts a 6.3-inch display with a 2960x1440 resolution, and a design that's broadly in line with the "infinity display" style of the existing Samsung Galaxy S8 and Samsung Galaxy S8+ handsets, albeit a little larger to encompass that increased display size.

Underneath the display lurks either a Octa core (2.3GHz Quad + 1.7GHz Quad) or Octa core (2.35GHz Quad + 1.9GHz Quad) processor alongside 6GB of RAM. On the storage front, Samsung will produce Galaxy Note 8 devices with 64GB, 128GB or 256GB of RAM, although we'll only see the 64GB variant here in Australia. Given it will support microSD expansion, that's not too onerous a limitation.

In software terms, it's an Android 7.1.1 handset. While Google has this week launched Android 8.0 ("Oreo"), it's predictably an exclusive for its own Pixel handsets for the time being, although the odds of Oreo landing on the Note 8 in due course are reasonably high.

On the camera front, as predicted, Samsung has opted for its first dual lens camera on the Note 8, with a wide angle Dual Pixel F1.7 12MP sensor with optical image stabilisation sitting alongside a telephoto F2.4 12MP AF sensor, with 2x optical zoom and optical image stabilisation. On the front of the Note 8, you'll find an 8MP F.17 sensor for selfies. In terms of camera effects, you'll be able to use both rear cameras simultaneously to apply bokeh effects either before or after a shot is taken, as well as the ability to fire off Dual Capture mode, which allows two shots to be taken at once so you get the wide and standard/telephoto view of the same scene.

The other standout feature of the Note series has been the inclusion of Samsung's own brand of stylus, the S-Pen. Samsung's claim with the S-Pen on the Note 8 is that it features improved sensitivity over previous S-Pen generations, as well as a finer tip point. The always-on display can be sketched on, although this was also a feature of the ill-fated Note 7. The S-Pen app will also support the creation of animated gifs if that's your style.

The Note 8 will support fast wireless charging, and, predictably, it features IP-rated water resistance, up to IP68 for full immersion in water. It's still not a great idea to go swimming with any smartphone, but the Note 8 should be more durable than most.

Samsung Australia will open up pre-orders for the Samsung Galaxy Note 8 in Australia quite quickly, as was rumoured. It will go on pre-order on 25 August 2017, with a pre-order bonus of a Samsung Convertible Fast Wireless Charger, valued at $119.

Additionally, any Note 8 owners who order between 25 August and 31 October 2017 and register by 14 November 2017 will be entered into Samsung's "Screen Assure" program, which offers a single free screen replacement for breakage events in the first 12 months of ownership.

The presales period is relatively lengthy, however, with actual instore availability of the Galaxy Note 8 starting on 22 September 2017. Locally, we'll see the Samsung Galaxy Note 8 in Midnight Black and Maple Gold finishes only, which means that (at least at launch) we won't see the Orchid Grey or Deepsea Blue variants. Usually at least one colour variant officially makes its way down under within a few months, although there's no guarantee of that.

In terms of outright pricing, the Samsung Galaxy Note 8 will retail for $1,499, $150 more than the Samsung Galaxy S8+. It will also be available through carrier partners who are expected to launch contract presales at the same time as Samsung kicks off its own presales effort.

All the Galaxy Note 8 headlines

The Samsung Galaxy Note 8 overcame the disaster that was the Galaxy Note 7, delivering exceptional features and performance you can now get cheaper than ever.

How does Samsung's new flagship Galaxy S9 compare with its stylus-bearing predecessor, the Galaxy Note 8?

Samsung's latest premium phone has gained Telstra's tick of approval for bush use.

The follow-up to the Galaxy Note 8 might just be a foldable Note.

Telstra's pre-orders for the Note 8 have opened, and it's offering the biggest pre-order bonus of any carrier.

How do Samsung's and LG's newest hero handsets compare?

Buy upfront, or pay off Samsung's latest smartphone in instalments.

Which of Samsung's Galaxy phones is the better buy?

Samsung's latest phone is directly aimed at Apple's iPhone 7 and iPhone 7 Plus, but how do the flagships compare?

No longer will you have to type "Hi Bixby, how do I install Google Assistant?"

Samsung's hoping to ignite interest in its larger smartphone brand at the end of August.