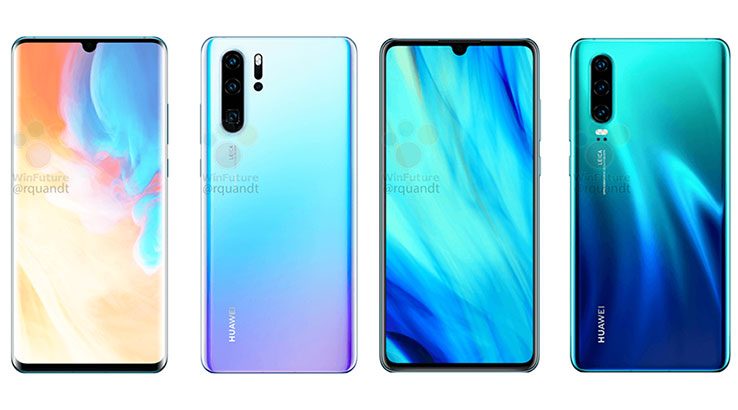 Details on Huawei's new flagships include 40MP primary lenses and up to 10x hybrid zoom.

Huawei is a week away from its formal reveal of the Huawei P30 and Huawei P30 Pro in Paris, but it appears that the functional specifications for the new handsets, alongside fresh imagery showing them off has appeared online.

According to reports on WinFuture, both handsets will run on the Kirin 980 processor, the same Huawei-built silicon that runs the Huawei Mate 20 Pro.

They'll both be Android 9 phones with Huawei's own EMUI launcher on top of them. While some rumours have suggested that Huawei is developing its own inhouse operating system if its stoush with the US government worsens, it's not jumping down that path just yet.

The Huawei P30 Pro will feature 8GB of RAM and either 128GB, 256GB or 512GB of storage, while the Huawei P30 will come only in a 128G variant. It's worth remembering that we won't necessarily see all those storage sizes here in Australia. While last year's Huawei P20 Pro was a sealed storage phone, Huawei has opted for its own "nano memory" (nm) card format first seen on the Huawei Mate 20 Pro for the new P30 phones.

The real story for these phones is of course going to be the camera technology that they feature. Huawei has been setting a strong challenge to rivals Samsung and Apple in the camera stakes of late, and the P30 Pro especially looks to continue that trend.

The rear camera array on both phones is a triple lens system with primary, wide and zoom lenses. For the Huawei P30 Pro, that's a 40MP f/1.6 primary lens, 20MP f/2.2 wide angle lens and 8MP f/3.4 lens. Like the Huawei Mate 20 Pro, the Huawei P30 Pro will use the combination of the zoom lens and high megapixel count primary lens to allow for a hybrid zoom feature, with a claimed 10x overall zoom. It will also feature a time-of-flight lens for detailing image depth, something we've already seen on phones such as the Oppo R17 Pro or LG G8 ThinQ.

Both phones will feature a 32MP primary camera, and it's a sure bet that we'll see an embedded "beauty" mode to give your selfies even more punch.

On the display front, the P30 Pro will reportedly have a 6.47 inch 2340 x 1080 OLED display, while the P30 will offer up a 6.1 inch display with the same resolution, meaning it'll have a higher pixel density. Both phones utilise a "teardrop" style notch, according to the accompanying images.

The leaks don't reveal any particular software tweaks or other features that Huawei may bake into its new style-centric handsets. For that, we'll have to wait until next week's reveal. Also not stated was any kind of pricing information, and that could be genuinely interesting. Huawei jumped up a little from its previous highly-affordable spacing for the Huawei Mate 20 Pro, and the Huawei P30 Pro may well follow suit.

Huawei of course hasn't verified any of these specifications, but WinFuture does have a strong track record in getting early information. We'll know for sure next week.