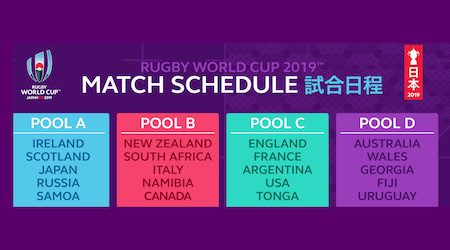 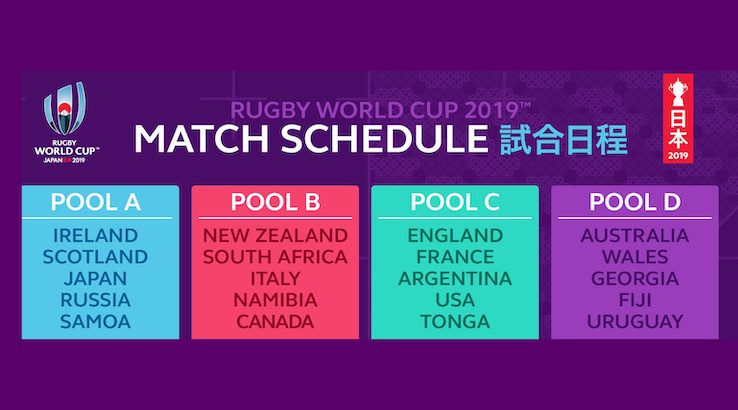 The 2019 Rugby World Cup schedule starts on September 20 and finishes on November 2: here's when every match is on live.

Teams will be competing for the Webb Ellis Cup. It's only been won by four countries since the inaugural tournament in 1987. However, 20 national teams from around the world have qualified for the chance to win the 2019 tournament. Play commences with a group stage, consisting of five teams spread across four pools. It then proceeds to a knockout stage in the finals.

New Zealand are the back-to-back defending champions, after wins in 2011 and 2015. Ranked number 2 in the world, the Kiwis will have 19 other nations gunning for them. Though taking the trophy from them is far easier said than done. The national sport in New Zealand is rugby union and its citizens associate it as part of their national identity.

With that said, there has been a major shake up of the Kiwi team in the lead-up to the 2019 Rugby World Cup. And recent losses to Australia and Ireland, as well as draw against South Africa and a narrow one point win over England, suggest many teams will fancy their changes of lofting the trophy on 2 November.

We have a dedicated Where to watch the 2019 Rugby World Cup guide with all the information in one place. But here's a quick summary.

All matches of the Rugby World Cup are available to watch in Australia. The broadcast rights for the full event are held by Foxtel and Kayo Sports, who will air every single game of the tournament live and, with Kayo, on demand. Channel 10 will also show a selection of games. Channel 10 will broadcast all Wallabies matches and the majority of the knockout matches, including the final.

So if you're a big fan of rugby union or your favourite team isn't the Australian Wallabies, you'll need a subscription to pay-TV to watch all the action. A subscription to Kayo Sports gives you the flexibility to watch anywhere at anytime at the best possible price at just $25/month.

This digital sports streaming service has a host of fan orientated viewing features and experiences, as well as over 50 other sports live and on demand to enjoy. You can read our full review for all the details, or jump straight into the 14-day free trial.

Alternatively, you can sign up for Foxtel IQ or, if you are already a subscriber, add on the Sports Pack and the HD Pack for an additional $30 per month. This will give you access to a dedicated 4K Rugby World Cup channel.

For information specifically about your favourite team, dive into our team guides:

Note: Channel 10 will also broadcast a selection of two quarter-final matches but is yet to advise which.

*England vs France, New Zealand vs Italy and Canada vs Namibia has been cancelled due to Typhoon Hagibis.