Romance is dead for Aussies renovating their master bedrooms 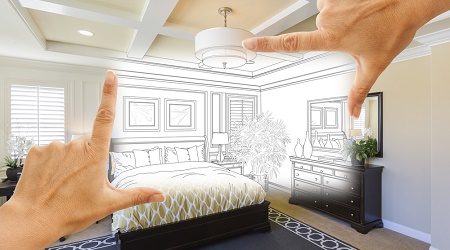 Bigger is better, a good night's sleep is important but we're divided on electronics.

Aussie homeowners renovating their master bedrooms aren't interested in creating a romantic atmosphere. Rather they're focused on improving style, adding beauty and most importantly, creating a calming environment.

Online design database Houzz Australia released the findings of its 2016 Bedroom Trends survey. The report analysed the intentions and actions of homeowners who are in the middle of, are planning, or have recently completed a bedroom renovation or decoration project.

Three quarters (75%) of the more than 5,000 respondents revealed a stylish and beautiful design was paramount. Creating a calming environment (72%) was almost equally as important for homeowners, while designing a room that feels like a sanctuary (54%) appealed to more than half of those surveyed.

Style is painfully important to renovators and decorators. When questioned about the style of their room prior to a project commencing, 38% claimed theirs lacked any at all.

More than half of all projects were listed as being major in scope (57%) with most (79%) hiring a professional to carry out the job. Carpet/flooring specialists were in high-demand (41%), while carpenters (35%) and painters (25%) were also necessary.

After all that work, it's no surprise a bit of shut eye is important. 81% of people want a bedroom that promotes quality sleep. Further to this cause, in order to promote a calming space homeowners are most likely to select neutral shades of white (46%), grey (30%) and blue (20%) as the colour of their master suites.

When it comes to electronics, just 15% of homeowners were adding them to their master bedrooms, while almost one fifth (18%) wanted the bedroom free of media and electronics.

If you're thinking of re-modelling your master bedroom, expanding the kitchen, dressing up the lounge or giving the entire house a makeover, we've created a handy renovation guide containing everything you need to consider.

One of the greatest adversaries of the renovation project is the odd-shaped room, however, there are ways around this awkward situation.

Considering we're obsessed with social media, apps and the internet and are using it in very strange parts of the house, consider these 10 apps in the planning stages of your renovations.

If all else fails, you can simply rely on Homer Simpson's Do's and Doh's of home renovation.