Rogue Trooper is a classic 2000AD character who isn't well served by this reheated PS2 remake.

Retro remakes are, undoubtedly, a tricky business. Publishers are essentially trading on the mixed allure of nostalgia with the promise of improved visuals and gameplay to draw in a crowd. Sometimes, this can work quite well, as we saw with Crash Bandicoot's recent Crash Bandicoot N.Sane Trilogy.

It's also pretty easy to see why developers go down this route, because while there are undoubtedly costs in re-rendering visuals and adapting gameplay to differing controller schemes, it's got to be a little less expensive than building an entirely new game structure. All the important gameplay decisions were made years, if not decades ago, although that shouldn't be prescriptive for a remake.

Which, rather circuitously, brings me around to Rogue Trooper Redux. I wouldn't have picked Rogue Trooper, a PS2-era game based on the lesser-known 2000AD warrior as being prime remake fodder.

That's not a particular slam on the original game, which was fine in its time. It's just that it was acceptable, but not exactly remarkable, and certainly not a game that a large proportion of folks were clamouring to see remade to speak of.

Still, that's what Rebellion (owners of all the 2000AD intellectual property) have opted to do, giving the classic third person run and gun game a fresh coat of paint and just a few tiny tweaks to accommodate the control schemes of the PS4, Xbox One, Switch and PC. I played the PS4 version, for what it's worth, because it was then easier to dip back into the original and compare relatively similar controllers.

If you're at all familiar with the original, you'll be pleased to note that Rogue Trooper still looks pleasingly authentic, which is to say that he looks rather like a steroid-addled Smurf with a serious gun fetish. You don't have to be up to speed with the series premise, because it's not exactly deep.

On Nu-Earth, near eternal war rages between the Norts and Southers, leaving the planet a toxic and barren wasteland. The Southers develop Genetic Infantrymen, able to withstand most toxins and the planet's corrosive atmosphere, and as Rogue Trooper, it's your job to take on the evil (and rather stereotypically Russian) Norts as you battle to avenge your fallen foes after a betrayal sees them massacred early in the game.

When GIs die, their biochips can be implanted into weaponry and armour, and early on in the game, Rogue's comrades are attached to his rifle, helmet and bag, handling weapons and upgrades as well as hacking and holographic distractions. It's a neat enough idea because they're fully voiced with a reasonable quantity of character, but it's still quite the simple gimmick.

Rogue Trooper can't rearm himself, or indeed upgrade his weaponry in the field, and this is where the nominatively-deterministic Bagman comes into play. Every foe you down can be scavenged for resources that are spent not only on upgrades, but also simply on ammunition for your many guns. You're rarely at huge risk of totally running out of ammunition, but it's still an approach that makes you careful with how you place your shots, lest you run low at a vital time.

Aside from the visual tweaks, however, Rogue Trooper Redux plays it very straight with its source material, which is the polite way of saying that you're playing a straight run and gun game from the PS2 era. The mood is appropriately 2000AD-esque, and the plot actually unfolds in an interesting way, but the core gameplay owes more to, say, Space Invaders than it does to Call of Duty. 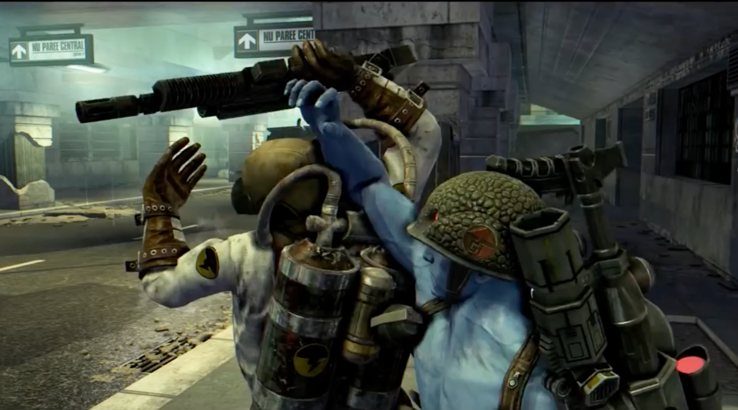 Not that Space Invaders isn't a game that you shouldn't play in 2017, and I'd have to hand in my retro gaming fanatic cap if I even hinted at such a thing. However, third person shooters have come a way since 2006, and if you're a fan of later shooter efforts, the seams in Rogue Trooper Redux's gameplay are all too apparent.

Enemy Norts are programmed to appear in specific places and largely act in specific ways, with only a light quantity of AI to guide their actions. You're given some freedom of movement and approach, and this can pay off with bonus salvage if you silently kill your foes without others realising.

However the inconsistent AI and level design can often force you down predictable corridors, and the simple intelligence of your foes means that this is rarely necessary. You can run and gun, and that has its appeal, but it's undeniably a limited appeal, because this is a remaster that's primarily visual.

That also means that you have to play into Rogue Trooper's "War Is Hell" aesthetic as well. It's certainly cleaner and fresher than its original, which I fired up for the purposes of comparison to check, and I guess it also dodges the "everything military has to be brown" cliché to a fair extent, but it's also unrelentingly grim. Again, that fits the source material (and made sense given the PS2's more limited palettes anyway), but it can make later levels feel very familiar, almost a trudge.

Rogue Trooper Redux is a weird critter as a remake. It's not a bad game to speak of, but it's equally speaking not exactly a title that fans were clamouring for a straight remake of. There's a load of potential in the story of Rogue Trooper that could make for an excellent contemporary video game.

Playing through Rogue Trooper Redux solidly gave me a load of ideas how this could now be done, but instead what you get is game design, circa 2006 with visuals updated to more modern standards, and it's an odd and not always suitable fit.

It's not particularly expensive, and that's a plus for a game of this type. If you're a hardcore 2000AD fan who missed out on the original it's well worth your time, but if you're more interested in straight run and gun games, it's harder to recommend.

We reviewed Rogue Trooper Redux on Nintendo Switch with a copy provided by the publisher.

Rogue Trooper Redux never really answers the question as to who it's for, aside from die-hard 2000AD fanatics. There was scope here for Rebellion to take the original game as a light blueprint for a more immersive and intelligent Rogue Trooper game. By simply applying the HD paintbrush and tweaking for modern controls, what they've done is instead deliver an only-slightly improved game that wasn't exactly a classic to begin with.

Four years on, Dumb Ways to Die aims to be “the safety champions of everything” nVidia on bringing the GTX 1070 Ti to notebooks: “We could definitely do that.”