Quick verdict: The smaller size of the Rig Nacon Pro Compact is likely to be divisive amongst gamers, but the inclusion of Dolby Atmos makes it a great choice if you regularly play games with headphones on. 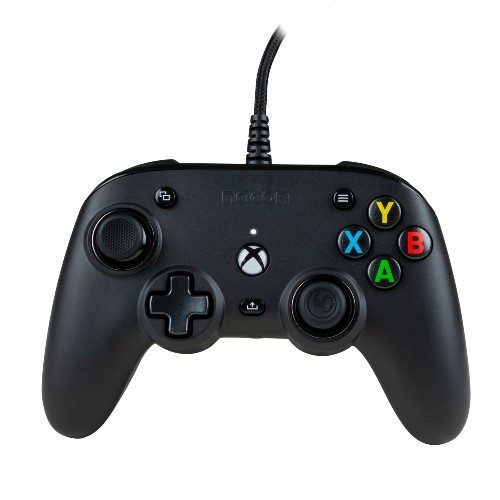 Nacon as a brand has been most notable in Australia to date for its range of PlayStation controllers, but the Rig Nacon Pro Compact sees the brand shift into the Xbox gaming space, and by association PC gaming as well.

The Rig Nacon Pro Compact is a smaller tethered controller that sells partly on its customisability, and partly on the fact that it comes with a Dolby Atmos licence for immersive headphone sound while using it.

Its smaller shape won't suit the hands of every gamer, especially if your muscle memory is already mapped to larger standard Xbox Series S/X/One controller sizes, but if you find them too chunky, or want an alternative that will never pester you about flat batteries, it's well worth consideration. 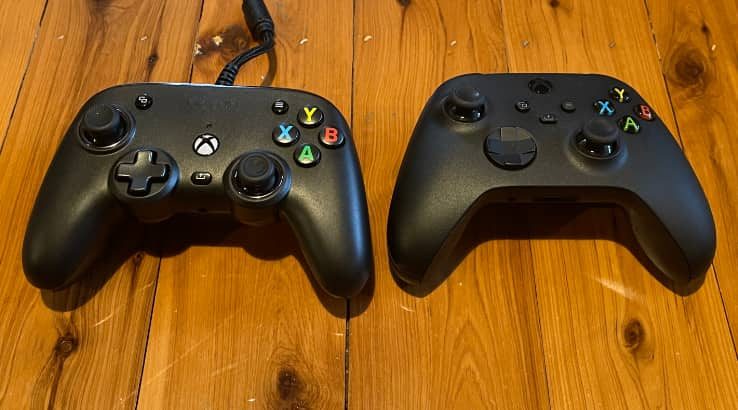 Whether that's better or worse will I think depend on your game choices and personal preferences. There's obviously a little muscle memory remapping at play there, but one advantage with this layout if you are playing games that require frequent use of either the View or Menu buttons is that they're a little easier to tap with the relevant fingers in a hurry on the Rig Nacon Pro Compact.

The Rig Nacon Pro Compact has a small body, but a long connection cable, measuring in at 3 metres and with a fabric wrap that certainly feels like it should survive a reasonable quantity of abuse. I haven't had the Rig Nacon Pro Compact long enough to fully assess this, although one of my cats did briefly attack it while I was playing a game, because the cable was moving (and therefore, in the cat's brain, "alive"), and it survived acceptably well.

Cat attacks probably aren't what Nacon builds its controllers for, and this may not be covered under warranty, mind you, but it's nice to know that it should be moderately durable over the longer term. Or whenever my cats are feeling playful, whichever happens sooner. 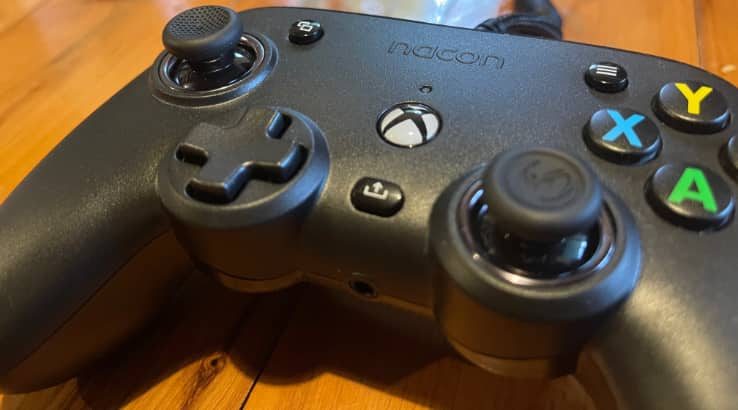 The most obvious benefit of a smaller controller comes about if you have smaller hands, or even just if you find the regular Xbox controller a little bulky and unwieldable for your tastes. In that respect, it's hard to fault the Rig Nacon Pro Compact, because it really is that compact. If I wanted to get picky – and I usually do – then I'd point out that the D-Pad doesn't have the same smooth, rounded sides as the regular Xbox pad, or that the rear triggers feel like they've got a little less physical travel than on the standard pad. The latter is almost certainly because they're smaller.

Putting the Rig Nacon Pro Compact and a regular Xbox Series X controller head to head, the only major differences to my gameplay came about due to the simple size differences. Yes, the D-Pad feels a little different, and I had to wrap my brain around where the function buttons now were, but otherwise it was a quick and fast way to just get into games. Across FPS, racing, platform and even a few retro game picks thanks to Xbox backwards compatibility, I really had no problems at all with the Rig Nacon Pro Compact.

However, it's going to be worth considering that size when you weigh up if the Rig Nacon Pro Compact is right for you, because those with larger hands may find it a touch on the cramped side. Nacon's pitch is that it's lighter and more comfortable as a result, although the only controller I can think of that ever felt like a lump in my hands was the classic Xbox "Duke" controller in that respect.

The Rig Nacon Pro Compact has 2 distinct software tricks to play to make it stand out from the crowd. Nacon provides software utilities for Xbox and PC that let you remap standard face buttons (but not function ones) as well as change the response on sticks and trigger actuation to suit your play style. That's what the switch on the back is for, because if you find that you favour swapping over button configs for specific games or because it suits your style, you can pretty easily do so.

The other big software inclusion for the Rig Nacon Pro Compact is a lifetime licence for Dolby Atmos, delivered to headphones plugged into the controller's headphone socket. Naturally, Rig has headphones it would prefer you use, but any old set of 3.5mm connected headphones will deliver Atmos, with the quality naturally enough limited by the quality of those headphones. Atmos is great in games that fully support it for immersion, and it's very nice to see that it's not just a time limited licence.

Should you buy the Rig Nacon Pro Compact?

The Rig Nacon Pro Compact fulfils the basics of being an Xbox controller quite well indeed. It's taken a fairly hefty beating at the hands of me and my offspring over the past few weeks, and it's holding up just fine, although the same would be true of a regular Xbox controller.

The high appeal here comes if you want a cabled controller – dodging battery and recharge issues, but picking up some tethering ones in return – and you use headphones for gaming on a frequent basis. At that point, the inclusion of Dolby Atmos adds a lot to your gaming experience, and with it, a huge uptick in the value of the Rig Nacon Pro Compact.