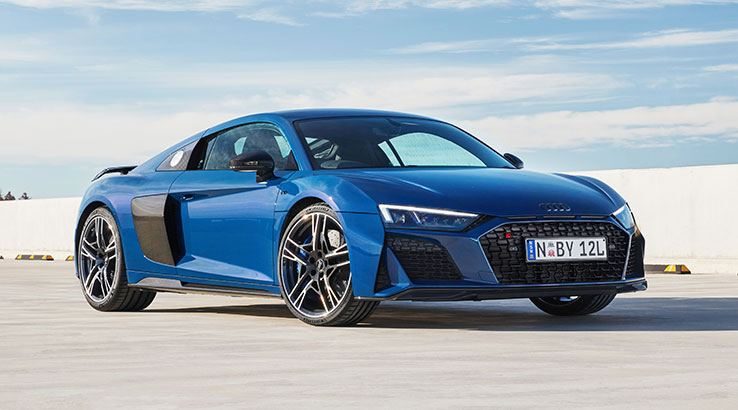 Audi's supercar R8 is returning to Australia with refreshed looks.

Audi Australia today made public information about the inbound R8 sports car, which will arrive here in four weeks.

2020 Audi R8s have a mid-mounted V10 engine, which seems set to become extinct in the future with more and more carmakers switching to hybrid and electrified propulsion. With a capacity just over 5.2 litres, coupled with a dual oval sports exhaust, the R8 will no doubt howl like a race car.

In fact, Audi says it is 50% based upon a GT3 motorsport car it builds. As a result, the R8's naturally-aspirated V10 power plant gets race-bred specs and tech like the following:

The R8 Coupé V10 RWD and Spyder both develop 397kW at 7,800rpm, while peak torque measures 540Nm at 6,500rpm. For the Performance Quattro variations, with AWD, the figures jump to 449kw, kicking in at a dramatic 8,250rpm. Torque is given a booster shot also, delivering you an extra 20Nm underfoot at 6,500rpm.

Audi states the V10 is engineered for performance as well as efficiency. For example, the car can intelligently de-activate up to half of its cylinders as needed, saving fuel. Audi claims consumption figures are 12.2L/100km combined for the standard R8s and 13.4 for the Performance Quattro variants. Basically, within touching distance of a ute.

Audi described the R8 as one of the most rapidly accelerating cars it has ever produced. Performance Quattro models blast from a standing start to 100km/h in a mere 3.2 seconds (you have to add 0.1 seconds if you go for the open-top Spyder). The non-performance models aren't exactly lazy either, with both body styles capable of a 3.8 seconds (or 3.7 for the hardtop) squirt to 100.

Using the impressively engineered Audi Drive Select program allows drivers to customise their R8 to suit the road conditions or their mood. Drive Select controls an adjustable electro-hydraulic clutch for tweaking the bias on Quattro models.

The electromechanical steering set-up can also be refined via Drive Select as can the magnetic adaptive dampers (on the Performance Quattro R8s). 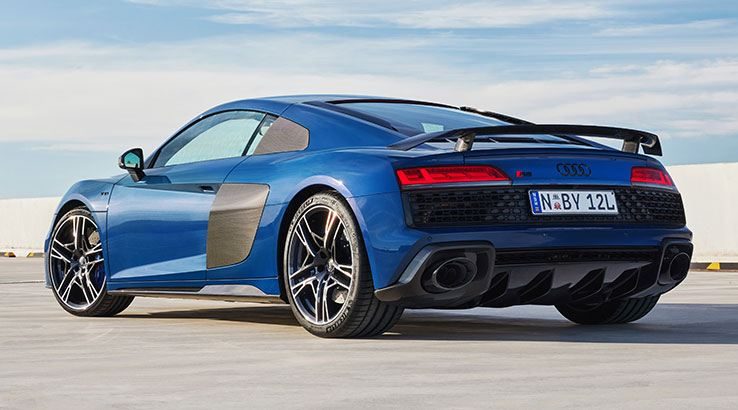 The refreshed body looks super clean and angular. It isn't just about form though. Underneath, a tray almost completely encloses the entire lower side, reducing aerodynamic drag. Look deeper and there's one of Audi's space frame chassis. An alloy and carbon-fibre combo body construction means the largest car component weighs only 200kg! Using these materials also means the body is more torsionally rigid. Even the suspension is a modified version of the type used on the motorsport R8s.

Additionally, the wheels contribute to handling and dynamics. On all models, they measure 20 inches across, but for the Performance Quattro, Audi bolts-on lightened wheels. Behind the rims sit large disc brakes. For standard models, these are vented steel discs, but on the performance models, you get carbon-fibre-reinforced ceramic upgrades. Audi's ceramic braking package shaves a whopping 11kg off the total mass. 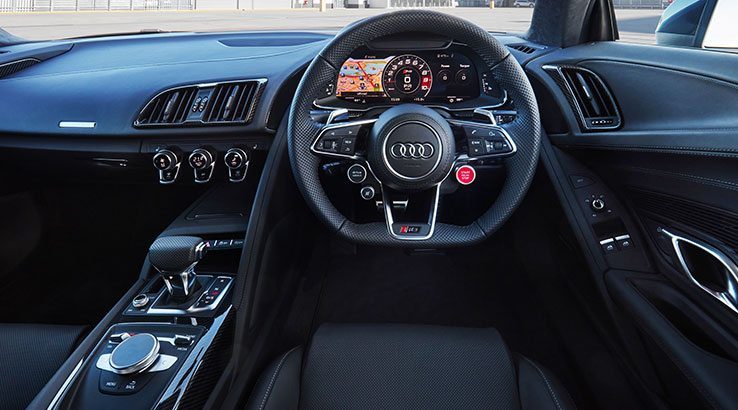 Reading through the spec list for the R8, it would appear that it's also a very practical performance car. You get all of the usual passenger comforts you'd expect from a luxury car, including the following:

This everyday supercar, which shares a platform with the Lamborghini Huracán, will arrive at dealers on 24 July, with Audi expecting to commence deliveries at the same time.

The manufacturer list prices (excluding dealer delivery and government charges) are as follows:

SPONSORED: Are bank shares a bargain or do…