An old (by cryptocurrency standards) argument is bubbling back to the surface, with researchers at the University of Texas publishing a new paper exploring the relationship between Tether issuance and bitcoin prices.

The premise is that the Tether cryptocurrency is printed in large amounts as a kind of free money and used to buy up bitcoin when its prices look to be dropping below key support levels. This isn't a new idea, having previously been loudly covered by the pseudonymous Tether critic Bitfinex'ed, but it does take a more thorough look at the phenomenon.

Is Tether being used to manipulate bitcoin prices?

According to the researchers, the scheme, if there is one, goes something like this:

Assuming the paper is reporting its methods and findings accurately, then either Tether is being deliberately used to manipulate bitcoin prices in this fashion, primarily via Bitfinex, or it's all an incredible one in a million type coincidence.

Statistically, it's probably not the second one.

How the analysis works

The first step was wallet analysis. The researchers used grouping algorithms, rich lists and known addresses to identify wallets associated with certain exchanges. From there, it was possible to observe coin circulation around the ecosystem.

The researchers visualised the flow of Tether like so. 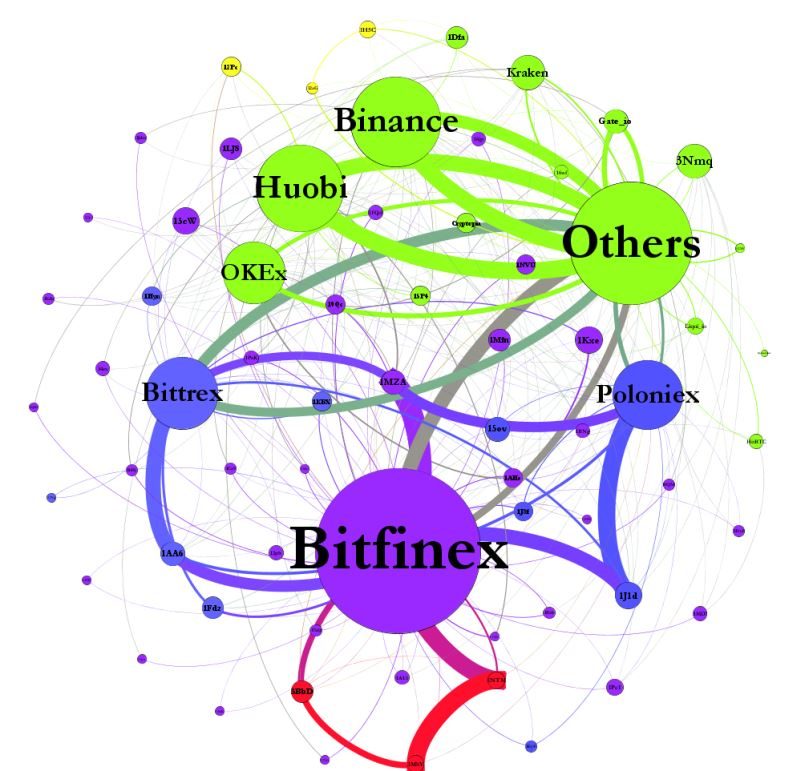 The size of the circles and the thickness of the lines indicate the volume of Tether flow, while the curvature of the lines shows which direction the Tether is flowing. A clockwise curve means the money's going that way, such as from Bitfinex to the 1AA6 wallet to its left.

Tether enters the system through Bitfinex, then dissipates throughout the environment.

"Tether is created, moved to Bitfinex, and then slowly moved out to other crypto-exchanges, mainly Poloniex and Bittrex. Interestingly, almost no Tether returns to the Tether issuer to be redeemed, and the major exchange where Tether can be exchanged for USD, Kraken, accounts for only a small proportion of transactions," the paper notes.

As you can see, different loops emerge, which are clearer with colour coding. It's thought that the loop between Bitfinex, Bittrex and Poloniex, via their intermediary wallets, is where the manipulation happens.

The researchers came to this conclusion by looking at the correlation between these flows and bitcoin price movements. Notably, it's only the movements in that particular Bitfinex loop (rather than the Binance/Huobi and Other loop for example) which strongly predict bitcoin prices, and certain correlations between bitcoin prices and Tether flow disappear when no new Tether is being issued.

The heavy flow from Bitfinex is most likely to only emerge when bitcoin prices are dropping or after another Tether printing run. In both cases, this flow itself is a strong predictor of future bitcoin prices.

This effect is extremely strong.

The researchers essentially laid this theory on top of bitcoin price movements from March 2017 to March 2018, and tweaked it in different ways to find the best match. For example, by applying a three hour lag time between Tether dispersal and bitcoin price bounces.

When appropriately tweaked, researchers found a model where just 87 hours of heavy Tether flow out of Bitfinex, between March 2017 and March 2018, were correlated with 50% of bitcoin's compound returns in that 12 month period.

And Bitfinex is naturally closely tied to Tether, sharing much of their ownership and essentially being helmed by the same group of people.

These discoveries are nothing new. Bitfinex's statistically-probable alleged Tether-based price manipulation has been something of an open secret for a long time. It's also been widely ignored, like many of bitcoin's inconvenient truths.

The main significance of this paper is that it uses different and more thorough modelling to reach the exact same conclusion that others previously have to add more evidence to the pile and bring more attention to the problem.

The timing is also very interesting. The US Justice Department recently declared war on cryptocurrency price manipulation, and this kind of research is undoubtedly a very good lead.

It's possible that this scrutiny around crypto price manipulation will see those involved pull back on their efforts, which could remove an important element of bitcoin price support. This lack of support, where the markets have gotten used to it, might have been responsible for the immense price drops of the last few days. At the same time, neither Bitfinex nor Tether is based in the USA, so they might not be too worried about US regulators.

If nothing else, it suggests a bleak future for bitcoin though. Its prices have apparently been carried by Tether and Bitfinex so far, and if that key support ever stops, which is looking quite likely, it might have a very, very long way to fall before hitting a new price floor.