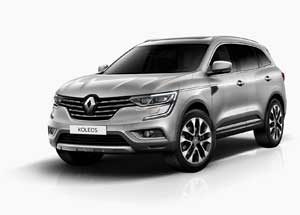 Avg. critics score: 73.25%
4 critics
How did we calculate this? We analysed and aggregated the scores of Car Advice, Cars Guide, Motoring and Whichcar to bring you the finder.com.au score. This is a comprehensive score that brings together the four different expert ratings you see below.
finder.com.au is personal finance comparison site that provides you with the tools you need to make better decisions. Learn
how we work and how we make money.

How does the Renault Koleos compare with its peers?

Prices for the Renault Koleos SUV start from $29,990 for the front-wheel drive Koleos Life, with a 2.5-litre petrol engine and automatic transmission. This base model has a 7-inch touchscreen and 17-inch alloy wheels.

Moving up through the range, the Zen trim adds a 7-inch touchscreen with sat-nav and multimedia. There's also all-round parking sensors and a rearward facing camera. The seats are trimmed in a faux, easy-clean leather and the rear seats drop by pressing one button.

S-Edition Koleos models receive 19-inch alloy wheels as well as leather seats with contrasting blue stitching. Parking assist is fitted as standard, along with 360-degree parking sensors. The boot opens hands-free and the seats are cooled as well as heated.

Metallic paints are an optional extra cost of $880.

Prices shown are for NSW, postcode 2000.

The above prices are the manufacturer's recommended drive-away price (MRDP). These costs include 12 months' registration and compulsory third party (CTP) insurance. They also include dealer-delivery rates and government duties.

The Renault Koleos range is a well-priced, sensible take on the mid-size SUV. Diesel models use fuel sparingly. The five-year warranty is welcome and you get capped servicing costs for three years. With an arsenal of creature comforts and safety assists, this is an SUV you should at the very least consider when buying your next car.

Renault outfits the Koleos with either a naturally aspirated 2.5-litre petrol engine or a 2.0-litre turbo diesel powerplant. The petrol engine delivers 126kW at 6,000 revs, with 226Nm of torque kicking in at 4,400 rpm. The slightly smaller capacity diesel generates 130kW at 3,750rpm and a grunty 380Nm of torque at only 2,000 rpm.

The Koleos range uses an X-Tronic CVT (continuous variable transmission), intended to give improved fuel economy, lower emissions, less noise and better acceleration. Rather than having gears, this system uses an adjustable conical pulley and belt set-up that can expand and contract as needed to alter the gear ratio. The result is a seamless changing of gears.

Of all the reviews we referenced for this comparison, all had at least some comment to make about the CVT drivetrain. One reviewer described it as lethargic, needing encouragement. They went on to say that when accelerating heavily, the car makes a disproportionate amount of noise to the increasing speed. Another tester said it was depressingly mediocre. Still another said it was slow to react and would hunt for greats. Diesel-engined Koleos models evidently gather speed faster (thanks to the higher torque figures), but once again the motoring media said it was hampered by the fitment of a CVT automatic.

However, as a car aimed at the family market, you may find this isn't a problem.

The official Renault fuel consumption figures for the Koleos are as follows:

If you do a lot of driving in general, the diesel Koleos offers the best fuel efficiency. However, unusually for a model range, the petrol-equipped Koleos have a higher towing capability.

As always, the brochure fuel usage figures are calculated according to Australian Design Rule 81/02 – Fuel Consumption and Labelling. This test is mandated and doesn't change conditions, unlike in the real world. Once you take a vehicle on public roads, your usage will vary somewhat.

For example, you may sit with the engine idling for a large percentage of time while stuck in heavy traffic, you could live in an area with large hills and the amount of weight you're carrying will fluctuate. All these real-world factors impact on fuel usage. As a result, you should take the official fuel consumption numbers as a guide for comparison only.

Car reviewers achieved 11.3L/100km combined with a front-wheel drive Koleos Life. Others managed 8.3L/100km or only 0.2L from the official numbers.

Around town, the Koleos is apparently quite compliant. It has great forward vision, plus responsive and light steering. One tester said its handling is quite refreshing and well suited to family buyers. It's certainly not a sporty Renault Megane, but then again, this car is targeting a different demographic.

One outlet mentioned that the 19-inch wheel and low-profile tyres mounted on the S-Edition gave quite a harsh ride: if that's a problem, you could consider a Koleos with taller tyre sidewalls. A journalist did raise a concern that upon heavy acceleration, the Koleos suffered from torque steer. As a front-wheel drive family car, generally you wouldn't find that an issue. The best way to get a true understanding of how a car like this drives is to test one. Head down to your local dealer and give one a whirl.

According to the motoring media, the Koleos cabin is spacious, even to the point that three passengers can happily share the rear seats. The middle seat occupant might be a little snug, but that's quite normal across most mid-size vehicles. Some testers mentioned that the front seating could do with a larger knee roll for under-thigh comfort. Most enjoyed the clean, elegant European styling.

You'll find ample storage for drinks, belongings and miscellaneous oddments. One thing that might be a sticking point for buyers, unlike its sibling the X-Trail, is there's no third-row seating for carrying a sixth and seventh passenger.

The Koleos doesn't have a shortfall of accessories and features. Safety-wise, there are six airbags, ABS, AEB, reverse cameras, forward collision warning and lane departure alerts on all models. Cruise control is another useful addition.

Intens line Koleos SUVs benefit from a portrait infotainment screen that measures 8.7 inches. As you progress to Intens, the 8-speaker Arkamys sound system is replaced by a 12-speaker and subwoofer set-up by BOSE®. Renault says this audio system delivers a concert-hall-like experience.

All models in the Renault Koleos range have Apple Carplay and Android Auto.

The boot has a storage capacity of 458 litres with the seats up. With the rear bench dropped down, there are 1,690 litres of storage space. By comparison, rivals like the RAV4 have 577 litres and the popular Mazda CX-5 has a smaller 442 litres.

The Koleos has a unique appeal for families, with lots of space and storage. It's reasonably quiet, equipped with a battery of modern safety assists and does everything to a good standard. Plus, it offers distinct value for money.

Compare some options to finance a Renault Koleos