Here's how to write an effective recommendation letter, making sure it puts the applicant’s best foot forward.

If a contact asks you for a recommendation letter, it can be hard to know where to start and exactly what needs to be included in it.

Use this guide to learn some top tips for writing a recommendation letter. Plus, some common pitfalls to avoid.

What is a recommendation letter?

A recommendation letter is used mostly by job applicants in order to demonstrate the key advantages or experience they have gained in a previous job. Recommendation letters typically make up part of a job application. However, they can be used when applying for scholarships, volunteering and government grants among other things. 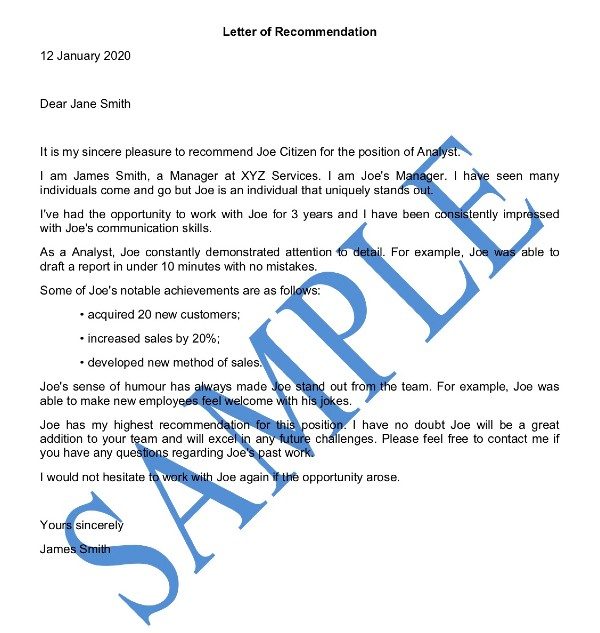 Why is a good recommendation letter so important?

Recommendation letters may be more sought after than any other type of written document. According to WritingHelpCentral.com, the online writing site, around half of their 1.2 million website visitors have sought help with such letters. The reason is clear: it's very important to the person who's asked you. After all, what you write could be the difference between a major promotion or a highly-prized scholarship.

So, it makes sense to be thoughtful when writing the letter. A good recommendation letter could really help somebody's life. It pays to get it right.

You'll find that many universities and businesses use 'recommendation letter' and 'reference letter' interchangeably. But there are some subtle differences between the two terms. Recommendation letters tend to be specifically requested by an organisation. The level of detail needed is typically greater and it's important to show the contributions made by the individual.

On the other hand, reference letters tend to be more general. It may be more appropriate for the writer to describe things such as the person's attitude to work, how well they contribute as part of a team and whether they show leadership potential.

Keep in mind that an organisation might ask for a reference letter when actually they're asking for a recommendation or vice versa.

How do I write a recommendation letter?

Start by understanding who'll be reading the letter. This is important because you can make the letter more targeted. It's a good idea to ask the applicant for a copy of the job description. By doing that it can be easier to understand what themes to communicate.

If the decision-maker wants to contact you, it is best that you add some contact details. In addition to that, the recommendation letter should briefly introduce your qualifications and how it is you know the applicant.

What should a recommendation letter include?

In a recommendation letter, a good starting point may be to focus on:

Using specific examples is one of the best ways to show someone's positive work behaviours and commitment to their work. It's one thing to read a list of someone's skills, but the reader will learn more about the character of the applicant with clear examples. Add a time when the applicant went above and beyond; creating significant value in the process.

Also, don't forget to state that you recommend them for the position they are applying for and why they are suitable.

What shouldn't I include in a recommendation letter?

Exaggeration. It is important to put the applicant in the best light possible. However, making unrealistic claims could work against the applicant. This is because the reader might think you are an unreliable referee if some of the claims are pushing the limits of belief. That could well reflect poorly on the applicant.

Another thing to avoid is generalising. One example would be endlessly listing skills and attributes. It is helpful to add some context. You can do this by explaining how the applicant showed, learnt or is currently developing the positive skills and behaviours you're describing. Listing skills is helpful. Remember to add some detail and explain how you know they show these skills.

Peter Terlato is a writer with more than a decade of journalism experience. His work has appeared in a number of global publications including Business Insider and Lifehacker. He's written extensively about travel, business, finance, politics, lifestyle and technology.