Quick verdict
Not perfect. But not far off. For pro-level gamers, the many edge-giving benefits far outweigh the slight design missteps in the Raiju Ultimate.

Let me be frank here. I already love the DualShock 4 controller as it is. Until Microsoft decided to go all out and release its premium brand of Elite controllers for the Xbox One, I had Sony's standard controller earmarked as my favourite of the generation.

Obviously, now that its rival is selling controllers going for upwards of $200, Sony now has a sizeable void where its own premium offerings ought to be. Razer has taken a stab at filling this niche with the Raiju Ultimate gaming controller, and what's been delivered certainly is a cut above the rest.

In simplest terms the footprint on offer here is a unit that's more or less the wider girth of an Xbox controller meeting the symmetrical stick placement of a DualShock 4. That's an interesting hybrid that I think borrows from the best of both worlds. It's also worth noting that existing Razer fans should be comparing this to the existing Razer Raiju Tournament controller. Stylistically they're almost twins, though the predecessor sports the lopsided analog layout. 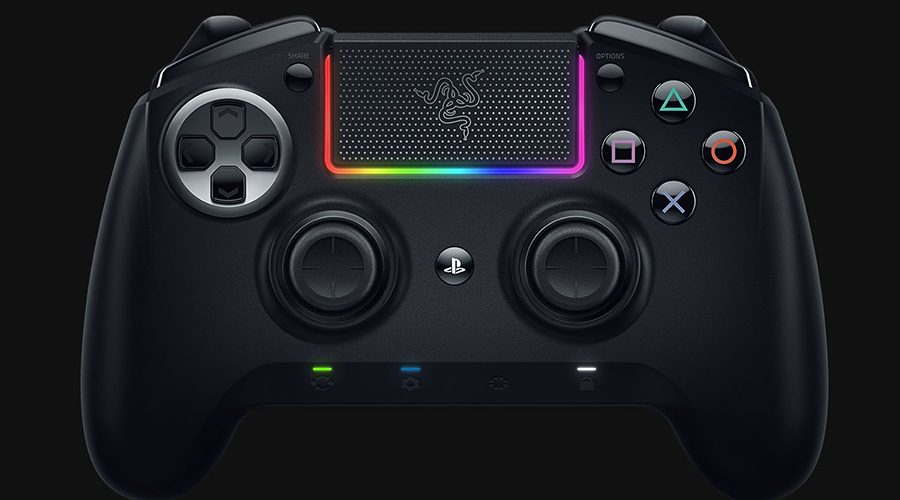 There's about fifty bucks' worth of difference between these two Razer stablemates. The extra money down will allow you to tweak the aesthetics of the Ultimate as you see fit, thanks to magnetically interchangeable thumbstick nubs and a clip-out d-pad. Your sticks can have convex or concave hats. Discerning old-school gamers can opt for a segmented d-pad that's like the standard DS4 or a single unit that's more like what we got on an Xbox 360 controller.

Aside from those accoutrements, the main housing of the Ultimate is covered in a non-slip black rubber. This goth tone is interrupted by silver shoulder buttons and additional buttons hiding underneath the unit. You also have the typical Razer Chroma light show running in a thin line around the touchpad. As you swap profiles or enter certain power modes, this strip will change into single colours. Otherwise, you can use the Synapse3 software (on a PC) to craft your very own rainbow disco. Cool stuff, but kinda pointless in my opinion.

The most attractive feature for pro gamers is the four additional buttons that have been added in underneath, where your fingertips naturally sit on the controller. These are known as M1, M2, M3 and M4. The former two are located a little further inwards than the L2 and R2 triggers and the others are where your third and pinky fingers touch the pad.

While I want to tell you they're a great idea and will work flawlessly for all hand sizes, I just can't. I myself had a tiny period of adjustment with my medium-to-large mitts, and then they were definitely a boon to me. After loaning this controller to a nephew with smaller hands, all I got back were his frustrated accounts of accidentally pressing them in the heat of Rainbow Six Siege multiplayer. Obviously the mileage is going to vary here. 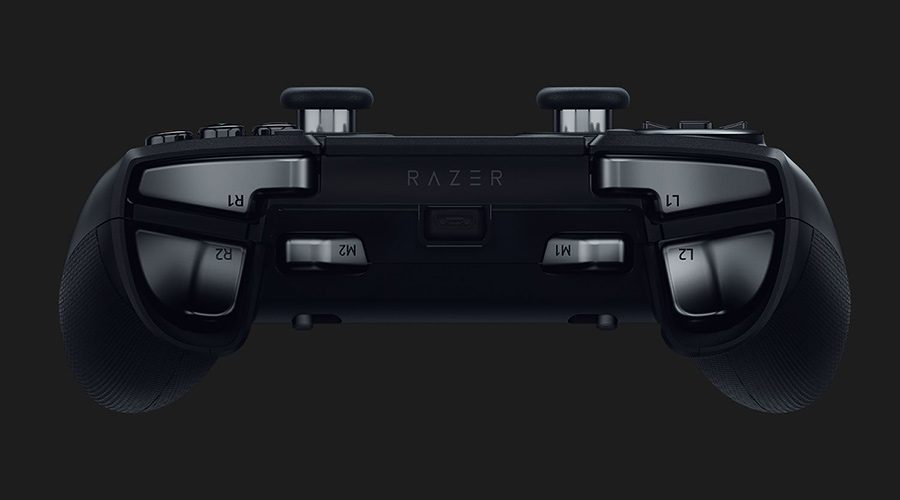 One other feature I personally loved was the sliders at the top that let you to effectively neuter the travel on the L2 and R2 triggers. You can basically turn them into digital buttons, with the idea being you can shoot faster because you're rocking hair-triggers, pardner. More on this in a second.

Other benefits with the Ultimate include full Steam support on PC. And you can swap compatibility modes with a sliding switch on the backplate (think: wireless PS4; wireless PC, and wired on either platform). You also have on-board profiles that can be messed with via Razer's phone app and the first thing you ought to do is squelch the lighting to swap swagger for battery life. Sadly, you can only remap the four face buttons via said app, but it's nice that you can mess with the sensitivity of the rumble motors. Dial those down and you can get the 11-hour battery life of the Ultimate to be slightly above the 11 hours advertised. This is quite a step down from the 19 hours offered by the Tournament version.

Rounding out the features is the oft overlooked cable length quotient. The Ultimate boasts a very respectable three metres (one metre more than its predecessor) but I hate that it's a braided proprietary one instead of a standard microUSB. My house is a cable farm so I just know I'm going to misplace "the only cable that will make this thing work". But to be fair that issue can be mitigated if you just pack everything away into the supplied taco shell case. It's incredibly durable and snugly holds the cable and the replacement parts just fine.

First thing's first. If you're one of those rare breeds – a fighting game fan who doesn't use a dedicated arcade stick – swapping out the segmented d-pad for the single unit is going to be the first thing you want to do. While it's quite possible to bust out hadoukens and other quarter-circle shenanigans with a standard DS4, I never ever liked doing it. Razer's d-pad feels so much more natural. I basically refuse to play any fighter or old-school 2D title on anything but the Ultimate. Likewise, I've grown to prefer the clicky-sounding "Mecha-Tactile" face buttons for those older genres of gaming. The ones on the Ultimate have an increased surety to them. I can't go back now. 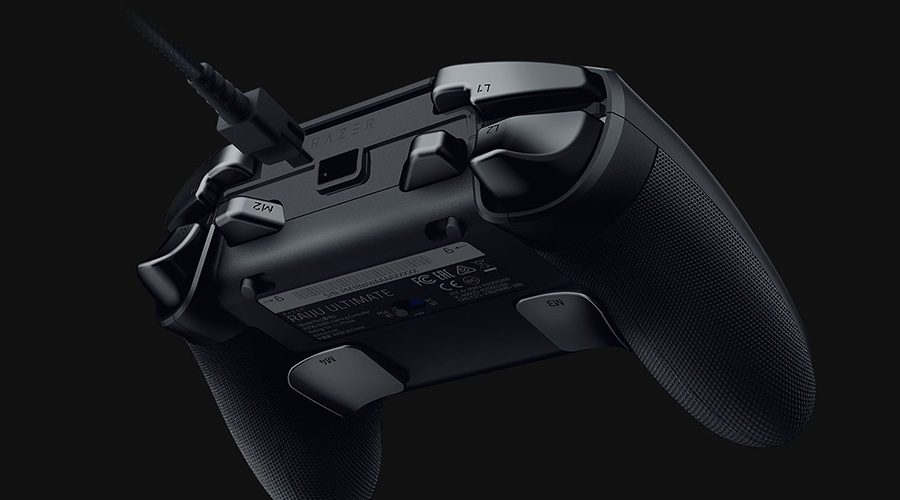 When it comes to the shoulder buttons, I think what's on offer is a mixed bag. Personally, I found the L1 and R1 to be squishier than I liked – they felt kinda cheap, though not as budget as the RB and LB of a launch edition Xbox One controller. L2 and R2 are an all-round success, though. In standard configuration they feel superior to the DS4 as accelerator/brakes in Gran Turismo Sport. When it comes to using them in "digital mode" I can confirm that I was gunslinging like nobody's business in Destiny 2's online Crucible. It felt like I was much, much faster on the drop than usual.

Once again, I found the additional buttons beneath to be nothing but a godsend in said PvP. Being able to double-jump and crouch/slide without taking my thumb off the right stick aiming made me way more lethal than usual. That said, I can understand how some folks might instinctively grip on them in the heat of a (literal) clutch moment, resulting in an incorrect press that will get them killed. Honestly, I think Razer should have stuck with the triggers that we got on the old Wolverine Ultimate. They were more seated centrally and were much smaller. I think it would have catered to a broader audience of claw types.

Last but not least, I went with low-profile thumbsticks that are half the height length and I wasn't disappointed. The resistance on the sticks feels roughly the same as the Sony original. I found that I required no period of adjustment at all when it came to my sniping game. Another big plus: I couldn't detect any differences in terms of added latency on any function of the Ultimate compared to the DS4, either in wired or wireless mode. Basically, no matter which configuration and environment you need it in, be that casual gaming at home or at a pro level tournament, the Razer Raiju Ultimate will work flawlessly.

Not perfect, but not far off. I think the many edge-giving benefits far outweigh the slight design missteps in the Raiju Ultimate. A crafty professional player will know how to leverage the overwhelming positives here and use them to pop heads and bust out shoryukens quicker than a standard DualShock 4 ever could. This is pricey but worth it. 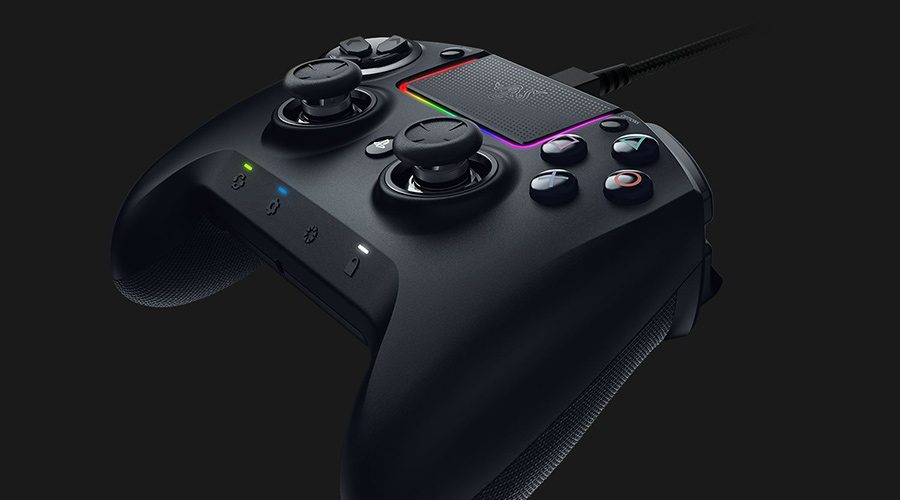 The Razer Raiju Ultimate retails for $349 and is available from JB Hi-Fi, Amazon, EB Games, mwave and other computer retailers.Buy at Amazon