Quick Verdict
We assumed haptic in headphones was sheer gimmickry. We became believers in no time. It's hard not to be impressed with this immersive sound/touch experience.

Touch is a sense that's woefully under-tapped when it comes to immersion-increasing peripherals. It's barely taken advantage of in the mouse-centric PC gaming market (unless you're a racing enthusiast with a force-feedback wheel).

Likewise, console gamers have enjoyed controller vibration since the primordial rumble packs we got with Lylat Wars on the N64, but there's been little experimentation beyond that tech. Razer doesn't reinvent the wheel here with the Razer Nari Ultimate, but they do provide an interesting new wrinkle to in-game immersion.

The general idea is to better sell your on-screen predicament to you when playing a game or to give you a lovely head massage when listening to certain types of music.

Frankly, I went into this review thinking this was a gimmick at best, and at worst an expensive way to simulate an externalised migraine. Be that as it may, I came out the other side a believer.

Let's get the superficial part of this review out of the way early. Razer has gone for a swivelling ear-cup design that connects to an auto-adjusting head brace of black aluminium. It's a good-looking unit, though the cans protrude a bit too laterally for my taste.

You get a slight "Princess Leia hairdo" thing going on. It's fine in a pro-gaming environment, but kinda goofy looking on a bus going downtown. That said, the added ear girth is justified here. These leatherette cups, made from a lovely high density foam, feel lovely on your melon, even after double-digit hours of use. It's like they're not even there. And you can put all that down to the addition of gel-filled cushions designed to keep your cauliflowers cool. Rest assured, you're getting premium level comfort for the money you're laying down.

Otherwise, the Razer Nari Ultimate is pretty standard from the outside looking in. I love that it has a retractable mic that slips away when I don't want to look like an especially eager telemarketer on the way to work. I also dig the well-hidden mute button on the rear of the left headphone. It shares real estate with a scroll wheel that lets you incrementally prioritise either in-game explosions versus the abuse shrieked at me from online nine-year-olds.

Slotted alongside those functions is a micro-USB charge point, a power button and a 3.5mm jack for hooking up to a console controller. Meanwhile, over on your right can is a volume wheel as well as a small compartment that houses the 2.4GHz wireless USB transmitter for PC/Mac/PS4 use. (Sorry Switch and Xbox One users, but you're stuck with wired connection only.)

Last but not least, you have Chroma lighting. Via the Razer Synapse3 tool, you can specify colour schemes like Breathing, Spectrum or Static and the unit supports 16.8 million colours. Or you can turn it off and stop being a show pony. It's important to note that Razer also promises a battery life of 8 hours with the Chroma lighting and HyperSense turned on or 20 hours with both of those features disabled. In my testing, I found that to be more or less the case.

Setting the haptic feature aside completely, the sound experience is up to the high standards already set by the Nari wireless. The two units sound very similar: the treble and mids are quite bright and the bass has a very warm signature to it. 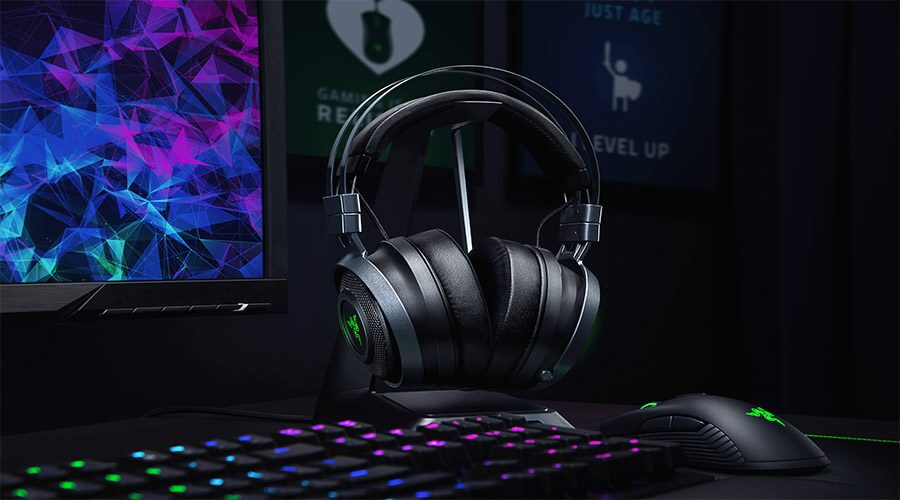 You have a bunch of presets to mess with, but I found this unit to be quite decent as is, right out of the box. If anything, some gamers might want to mess with the EQ to inch up the bass. And the good thing is that when you do these minor preference tweaks in the PC software, you can access your saved profile easily when you've moved to a console.

I also loved the inclusion (or carry over, if you've already have the Nari wireless) of THX Spatial Audio. If you've never experienced it before, it goes above and beyond surround sound by simulating a 360° soundscape around you. Basically, you'll be expecting a premium sound experience with Razer Ultimate and that's exactly what's delivered.

So what do haptics feel like on one's head? First of all, you can forget about the unimpressive haptics you have on your phone. You haven't paid all this money to have that angry, one strength vibration buzzing on your noggin. Personally, I went in expecting either a wall of vibration that accounted for every sound coming my way, however insignificant, or a weak display where nothing but a nuke going off next to me would register as a minor vibration. What I got was anything but. 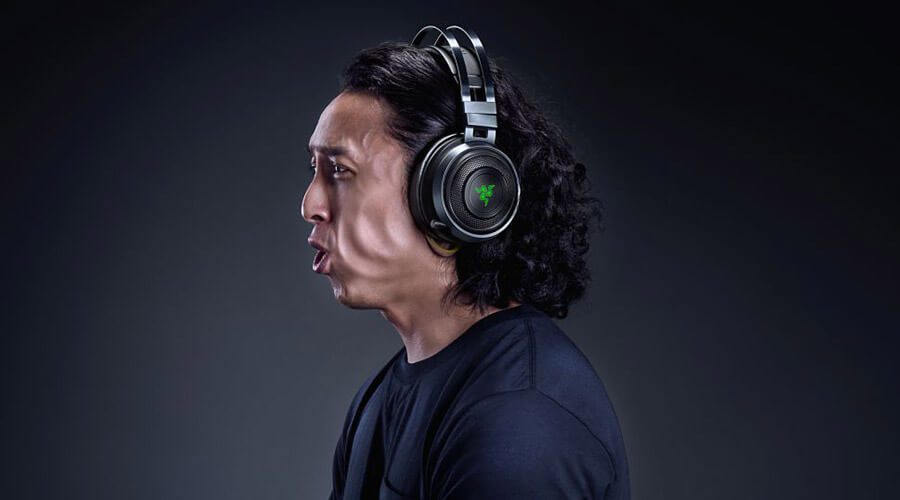 With the Nari Ultimate, vibrations flow accurately from left to right with an impressively nuanced degree of intensity. My testbed of video games included what I think are the crème de le crème of in-game audio – DICE's Star Wars Battlefront and Battlefield titles. We're talking nothing but the finest down-to-earth gun retorts and also the weirdest sci-fi sounds made by Ben Burtt.

Barrelling along the trenches at Gallipoli, feeling artillery smack the earth around you is ridiculously immersive, and I found I could gauge the distances of them much better. Likewise, the crisp punch of a bolt action rifle firing feels like your cheek is resting on the stock when the trigger is yanked. The haptics in Battlefield are so impressive, when I let my staunchly non-gaming, long-suffering wife have a turn, she uttered a "wow" despite herself.

Another high point was pairing these with a PSVR headset and the Rogue One: X-Wing VR experience that was added to the original Star Wars Battlefront. The word immersion doesn't even cover it. With my S-foils opened, I was marvelling at the nudges coming from four different points on my head (think quad laser cannons).

I was flinching whenever a turbolaser pinged off my shield from the star destroyer below me. My situational awareness was heightened like never before, but it has to be said that having to connect the headphones through the 3.5mm port on the PSVR dampened the haptics by at least 50% and at the cost of a lot of its nuance. Playing the same game without PSVR via the USB dongle was vastly superior. All that being said, Xbox One and Switch players will similarly be missing out on a lot of what makes this product so effective.

In the end, there are definite tactical benefits to owning a pair of these if you're a PC or PS4 player. I already own a decent pair of gaming headphones (like dozens of them, actually), and I already know that surround sound gives me directional hints that many bargain basement cans do not.

The Nari Ultimate offers a layer of awareness that goes well beyond what I expected. It's one thing for your brain to accurately hear an enemy weapon, footstep or explosion sounding at your 8 o'clock. It's another thing entirely to "feel" the same information coming from the same vector. It's like being tapped on the shoulder – you can't ignore it, even if you're preoccupied with other things. In my mind, this feature alone makes these headphones well worth the premium asking price. The Razer Nari Ultimate is going to make you a better gamer.

The Razer Nari Ultimate Wireless Gaming Headset is available from JB Hi-Fi for an RRP of $279.