Quick verdict: Razer’s Kishi controller works well for both providing gameplay controls and a way to keep your phone charged while gaming, but the Version 1 product is limited by phone size and operating system. The upcoming Kishi V2 should solve most of these issues, so unless you can score one cheap, hold out for that or look to more flexible alternatives. 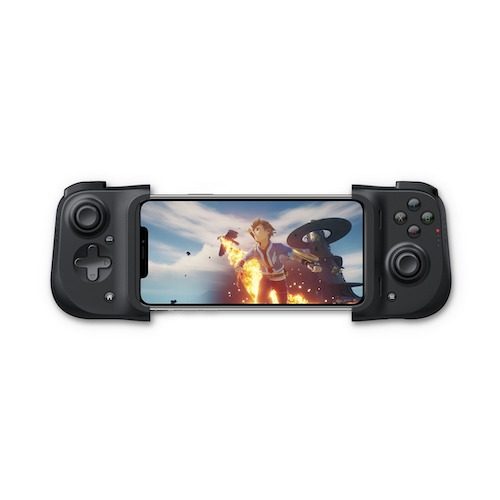 Where to buy
Buy at Apple

Razer's Kishi controller is often cited as the gold standard for mobile game controllers. It's not hard to see why, because it combines Razer's long commitment to providing top quality gaming peripherals with the growing market for mobile gaming, which can now include a wide array of streaming game options.

However, the Kishi doesn't exist alone in the gaming market, and Razer's particular take on a controller without its own battery does invite some issues, depending on your preferred play style.

Design: Folds down small… with some difficulty 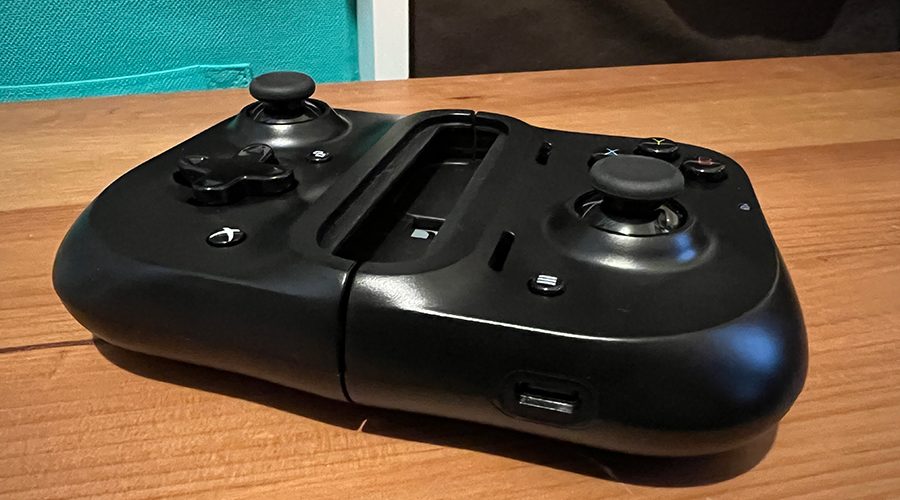 Out of the box, the V1 Kishi – which is what I've reviewed here – looks like just about any compact controller you may have seen before, with side mounted analogue sticks, standard Xbox style controller button layout and dual triggers at the top.

That might make you think that the Kishi uses a mount at the top, same as many very cheap Bluetooth controllers, but that's not its style. Instead, there's a release plate at the back that pops open from a pair of latches, allowing a ribbon cable to extend both sides out. This also reveals either a USB C or Lightning connector, depending on whether you buy the Kishi for Android or iOS.

Two important notes here: The Kishi is quite smartphone brand-dependent because of that use of a charging point for connectivity – at least until (and if) Apple ever switches to USB-C.

The second note is that Razer has a V2 version of the Kishi imminently coming to market that changes this fold-out design, replacing it with a solid bridge at the back and a few new buttons on the face.

That should lead to whatever stock of the V1 is in market dropping price, so make sure you're getting a good price if you do opt for the V1 model. 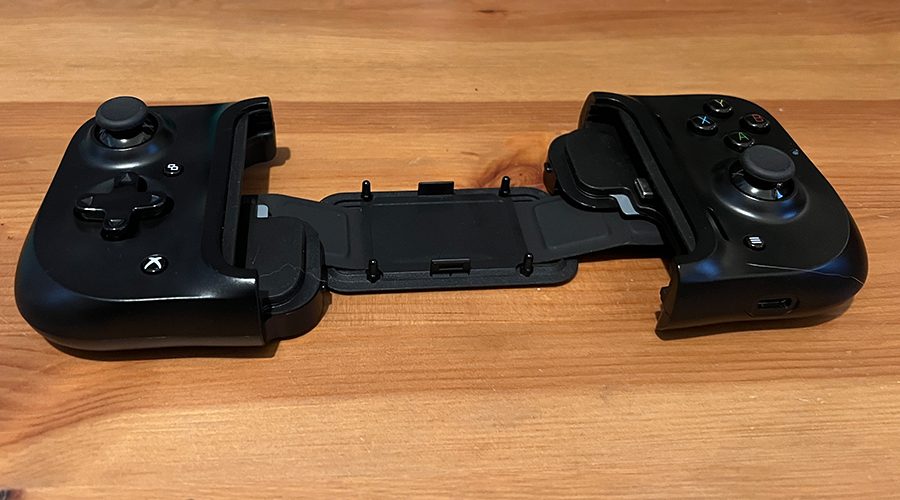 Once your phone is slotted in and lined up with the USB C port, connection is instantaneous, with the Kishi using your phone's power to provide power within its own body. A neat design touch here is the inclusion of a charging point at its base. Plug it in, and your phone will charge while you play games.

What you're left with in most cases is a gaming device that does rather look like a Microsoft take on the Nintendo Switch lite.

It's nicely portable and well laid-out, although I did find the whole process of collapsing the Kishi more of a chore than I'd like. The V2 version does appear to do away with that problem, however. 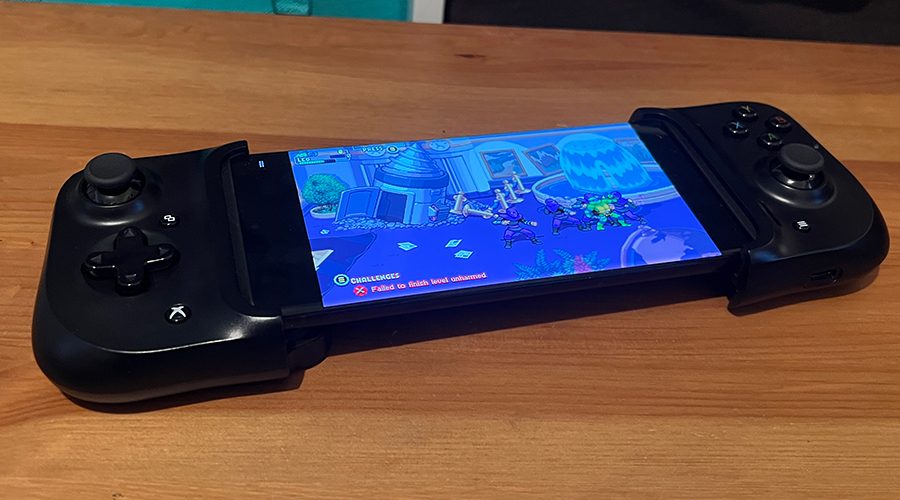 The V1 Razer Kishi as tested was the Android variant, designed to be compatible with Android phones running Android 8 or better, which isn't a particularly high hurdle to jump over.

There is a catch – which again, the V2 model apparently does address – if you're using a larger phone or one with an unusual camera bump, it may not line up properly within the Kishi's case.

In my testing, I could get a Samsung Galaxy S21 Ultra 5G to slot in, but only without a protective case on it, while trying to get a Google Pixel 6 Pro in was a fruitless exercise.

To be fair to Razer, neither phone existed when the Kishi was new, and again if larger handsets are your jam, wait for the V2 model, which is designed to take bigger phones on board with fewer issues. However, I still wonder how well it'll take to the Pixel 6 Pro's camera bar.

That direct connection does make getting some bigger phones in a chore, and does mean you can't also sneakily use the Kishi as a Bluetooth controller with other devices.

However, what you lose there, you gain in rock solid connection quality. The challenge for any Bluetooth controller is that you can have input lag, and in some cases connection drop-outs. If you've ever walked around with Bluetooth headphones that crackled near traffic lights, you'll be familiar with this kind of concept.

This just isn't an issue with the Kishi, because it's always connected to your phone by default. That leads to some superb gaming experiences, with the unit feeling really solid once a phone is clicked into place.

It's a tad annoying that there's no headphone jack connectivity – you will need Bluetooth for that, even with phones that have a 3.5mm jack – but otherwise, the Kishi provides a really top notch gaming experience.

I tested the Kishi across a range of standard Android games, as well as streaming services including Xbox Live GamePass for Android and Antstream retro gaming, to get a feel for how responsive its controls were. 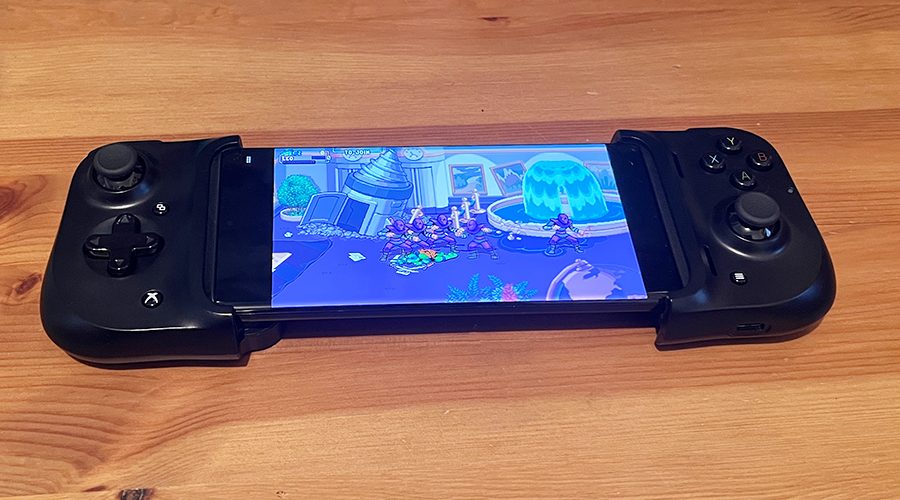 The thumbsticks are wonderful, with great precise control running through the deeply fun Teenage Mutant Ninja Turtle: Shredder's Revenge. The buttons are decent without being stellar, and the same can be said for the D-Pad. While Android fighters aren't a hugely competitive category, reliably getting moves off on the D-Pad was a little trickier than I'd like.

The Kishi does have the issue – as do so many other controllers – of whether or not your Android action game of choice will support and map buttons intelligently.

Razer has a dedicated Android app for the Kishi, but it's 100% just to do with listing known compatible games, not allowing you to remap buttons. As such, you're at the mercy of whether the game you're playing will allow that.

Should you buy the Razer Kishi?

The Razer Kishi V1 has been on the market for a while now, and in just about every aspect I'd say if you're keen, wait for the V2 model hitting the market very soon, as it does appear to address most of the issues I've had with the first generation variant.

That being said, you do also have other choices, such as the cheaper HyperX Clutch Wireless or the Nacon RIG MG-X Pro.

The Razer Kishi V1 used in this review was loaned to me by Microsoft for the purposes of testing out GamePass Cloud gaming, although this was far from the only way it was tested over a 2-week period.

I tested using a range of on-device games and cloud game streaming services with a Galaxy S21 Ultra 5G, Motorola E32 and other Android devices to hand for sizing compatibility, although the S21 ended up as my primary game testing platform.