Quick verdict: If you like the feel of a mechanical keyboard but hate the heavy duty clacking noises, Razer has just the keyboard for your needs. 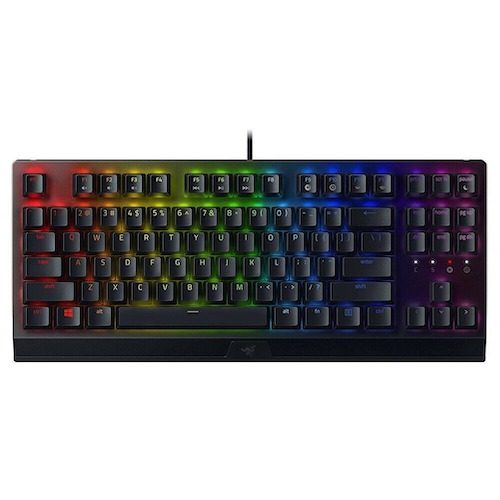 Razer's latest mechanical keyboard, available either with a full suite of keys or in a tenkeyless form, as reviewed here, has a secret weapon.

And like with most mechanical keyboards, it's not a feature designed to intimidate your enemies with flashy lights or other gaming-specific features, for once. Indeed, when you're using it, your enemies might not hear you coming, because the big improvement in the Razer Huntsman V2 is just how quiet it is. 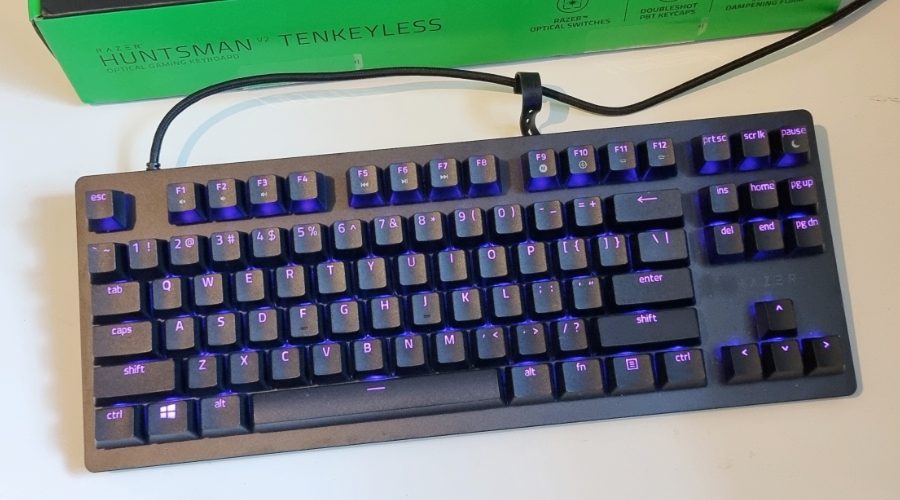 Like any other tenkeyless keyboard, the Razer Huntsman V2 Tenkeyless is a compact device best suited for those who don't want or need the distractions of a number pad or dedicated media function keys.

Razer makes the Razer Huntsman V2 Tenkeyless with your choice of either clicky optical or linear optical switches. As you'd imagine, the latter is designed to be significantly quieter than the clicky type. Razer sent me the Clicky optical version of the keyboard, but even here it's not as clicky as you might imagine.

Fans of that rapid-fire sound of a keyboard under maximum stress might find this slightly annoying, but it's absolutely the point. It's also a key reason why you'd bother with the Razer Huntsman V2 Tenkeyless at all, because it uses an internal soft foam pad to absorb key actuation sounds, even on the clicky model. The end result is the feel of a mechanical keyboard in response terms, but much less of the sound.

Frankly, I wish Razer had sent the Linear model, because that would be even quieter, but your own tastes may vary. Many typists do prefer clicky switches rather than the less tactile linear approach.

Speaking of taste, any gaming keyboard worth considering has RGB lighting, right? In the case of the Razer Huntsman V2 Tenkeyless, it's a rather muted affair. 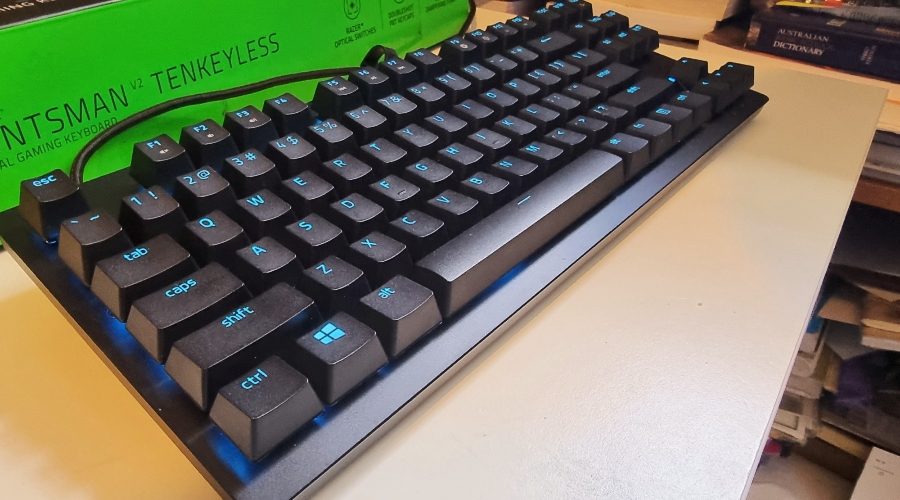 You do still get Razer's classic Chroma effects on each key, but that's all you do get. There's no additional lighting or glow effects around the body or base in any way.

Again, that's a completely personal matter. If you must have an all-out RGB lit keyboard, this won't suit. But if you're looking for an input device that you could much more easily use in an office setting as well as on-the-go gaming, it would fit the bill nicely.

The Razer Huntsman V2 Tenkeyless uses a detachable USB-C cord for connectivity to the device of your choice. It has a rugged cable, but the use of USB-C does mean that you're not stuck with a dead keyboard (or a soldering/cabling job if you're particularly hack-minded) down the track.

The trade-off here is that there's no USB passthrough ports for power or other peripherals, something that might have been nice to see in a keyboard at this price point.

What you do get is an optional wrist rest. There's still considerable debate about whether or not wrist rests are a good idea from an ergonomic standpoint. It's at least soft and you can just leave it aside if it doesn't suit your gaming or typing style. 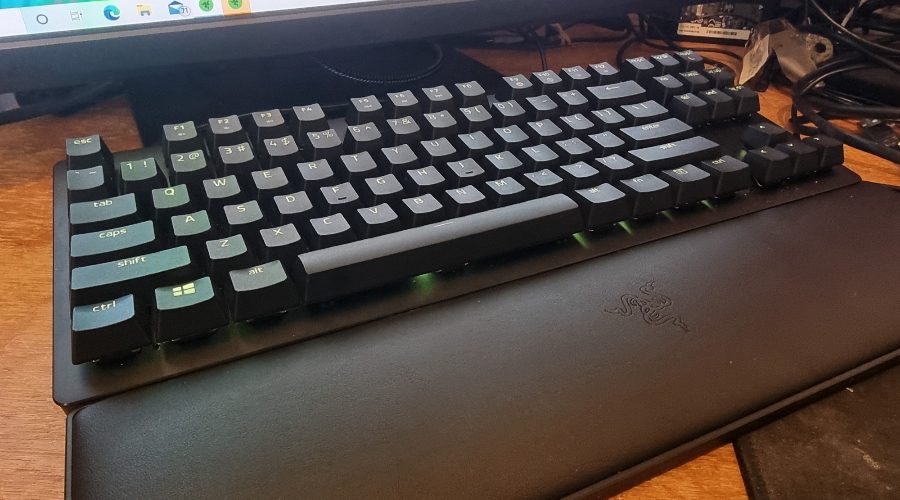 The real test of any gaming keyboard is how it makes you feel in the thick of combat. I can't lay claim to being any kind of best-in-the-world gamer (unless somehow the PAL version of Ms Pac-Man on the Atari 2600 counts), but across a range of PC games I've found the Razer Huntsman V2 Tenkeyless to be a joy to use.

That's partly down to its actuation, which is extremely quick by default at a claimed 8000Hz polling rate. You're not going to be hitting the keys quite that fast all of the time, and I'm certainly not at that rate for gaming, although some who have seen me type might suggest my scribing capacity could come that quickly.

As with all things Razer, you can customise the settings on the Razer Huntsman V2 Tenkeyless, although only on Windows 10, and only after installing Razer's software and setting up a Razer account. You can at least pick which parts of the Razer experience you want to use and which you don't as part of the install process. 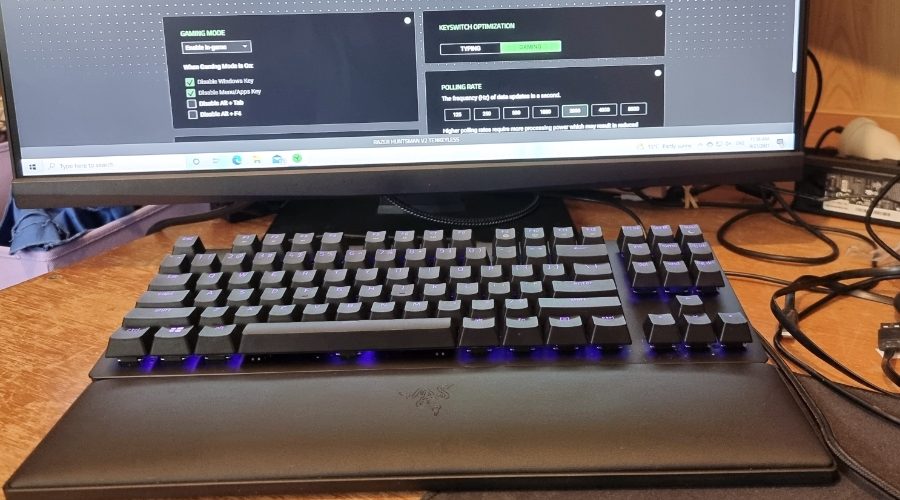 Besides the rather obvious choices around RGB lighting, you can also set macros and profiles, and change up the polling rate of the keyboard – useful if you either need very fast polling or don't want to waste processing time doing so.

You can also switch between typing or gaming modes with focus on faster triggering for those in-game moments, or not if it doesn't suit your typing style. For what it's worth, I only stepped out of gaming mode briefly, as I felt it didn't make that much difference to my typing accuracy or speed.

The Razer Huntsman V2 Tenkeyless feels solid under my fingertips, although there is a little more noise from the space bar than the regular keys when I'm in a writing flow. The same is likely to be true for gaming sessions as well if you're not already ensconced in a good set of gaming headphones.

Should you buy the Razer Huntsman V2 Tenkeyless? 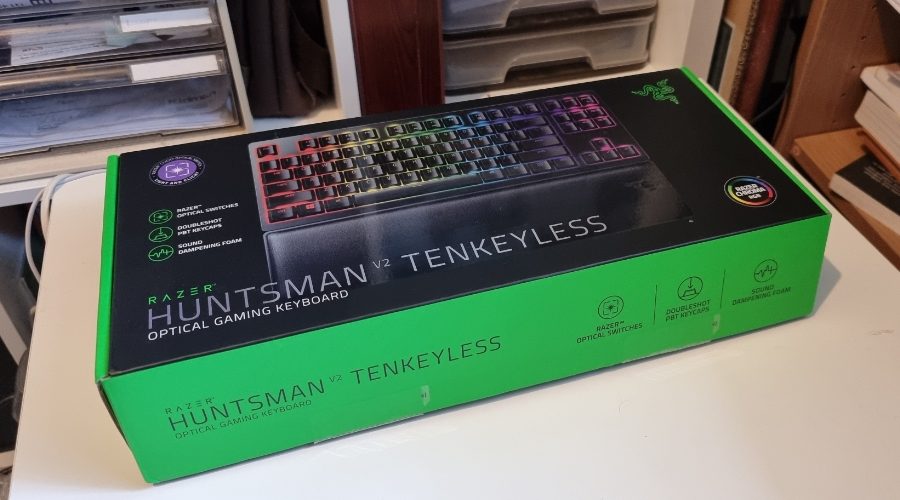 When you start selling mechanical keyboards based on their sound profiles, you're bound to get split responses.

Some users of mechanical keyboards love them specifically for how they sound when they're under heavy usage, whether that's for nostalgic typewriter analogies or for how close you can get to a real machine gun sound.

The Razer Huntsman V2 Tenkeyless was tested over a 3-week period using it as my daily keyboard for both work and play over many hours of usage, connecting to Windows 10 PCs, laptops and an M1 MacBook Pro, just to see what would happen. If you're curious, it very much works, but you don't get access to Razer's software outside of the Windows 10 world.