RAT shortage: When will more rapid antigen tests be available in Australia? 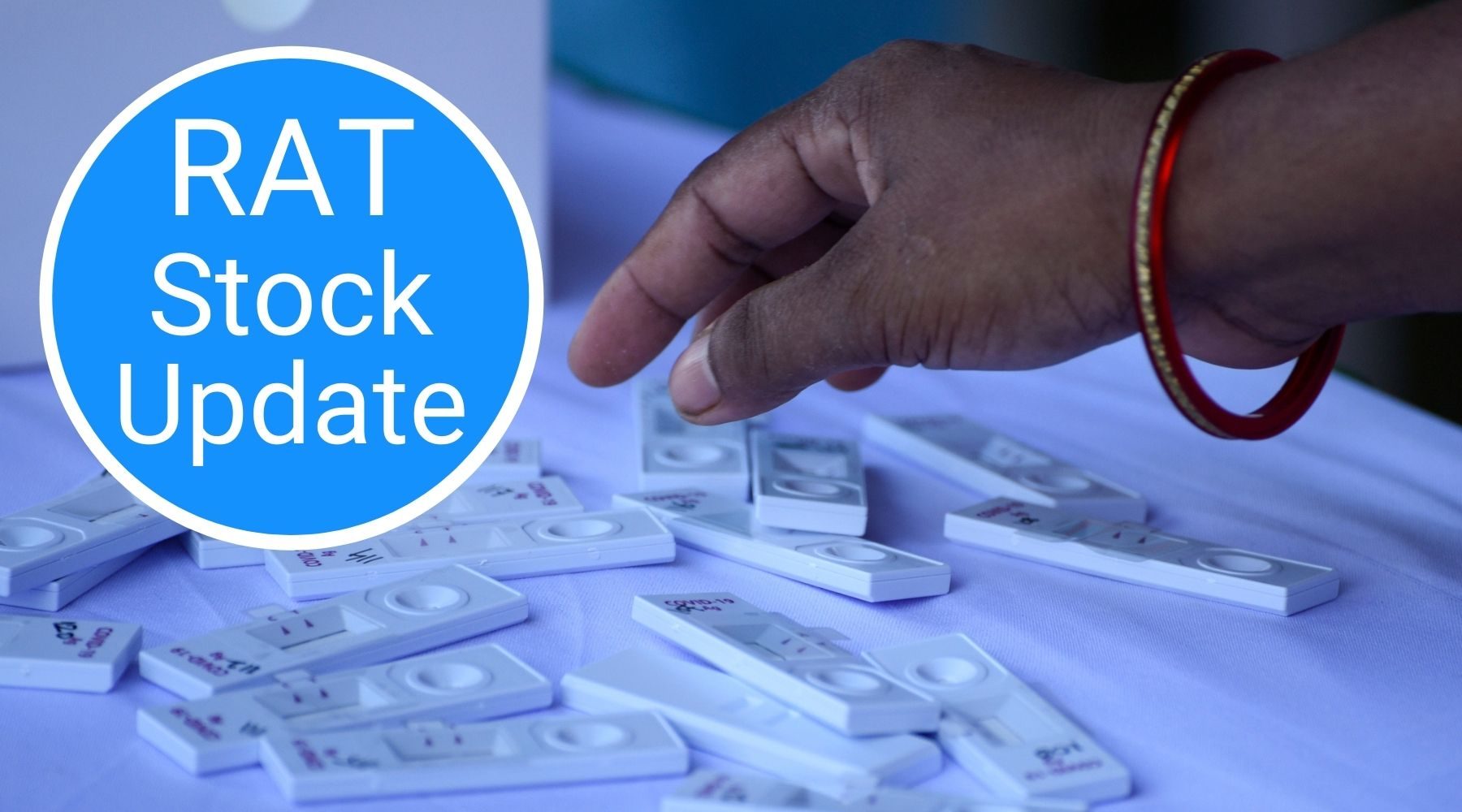 Rapid antigen tests have been nearly impossible to buy in Australia. We may have to wait until Mid-February to see supply normalise.

Rapid antigen tests (RATS) have been in alarmingly short supply in Australia for weeks now. And it's gotten worse as cases continue to rise and testing clinics remain busy.

Among all the chaos and consistent changing of rules, Australians are still left wondering when more RAT stock will be available?

Finding RATs in Australia has become so difficult that people have taken it upon themselves to let the public know where stock is available. One website, Find A Rat, is completely run on crowd sourced information. The Pharmacy Guild of Australia has also launched a site to help people find RATs and related information.

But it's still tough. According to our data, only 52% of Find A Rat stores actually have stock at the moment:

The shortages have also caused price-gouging problems across the country. It has gotten so bad that the Australian Competition and Consumer Commission (ACCC) is now investigating.

How expensive has it gotten? New South Wales comes out worst, with it costing on average $19.38 per single test. Meanwhile, in Victoria it is just $14.50 per test. Still, this is a mammoth cost compared to some other countries that provide them free of charge.

And when it comes to which retailers charge the most for RATs in Australia, it tends to be petrol stations and convenience stores:

And because the world is broken, scammers are also taking the RAT shortage as an opportunity to take advantage of people.

Why is there a shortage?

According to the Australian Medical Association (AMA), it warned the Morrison government that it needed a national strategy when it came to rapid antigen tests back in September 2021.

However, according to The Guardian, the AMA was told that the federal government was unwilling to intervene in the private market.

Fast forward a few months and the Pharmacy Guild of Australia, as well as some retailers, are claiming the government is now doing exactly that.

In addition to the state and federal governments placing huge orders for RATs, some entities are claiming the government is seizing their stock, according to SBS and The Guardian.

However, its worth noting that these claims are currently unsubstantiated and federal Health Minister, Greg Hunt, has denied the claims.

"It is a plain lie," Hunt said in a statement to The Guardian. "I have written to suppliers to say that was not the Australian government's position."

Interestingly, $62 million worth of RAT tests were ordered by the commonwealth just last week. This coincided with some pharmacies and retailers being informed of supply delays.

The NSW government has also announced the purchase of an additional 65 million RATs to be used for essential government workers, ill patients and schools.

While the federal government did announced a 70 million stockpile of rapid antigen tests towards the end of 2021, they are different to those being sold by retailers and pharmcies. Instead, they are 'point of care' tests that need to be provided to people by a professional.

When will more rapid antigen tests be available?

Pharmacy Guild Australia, Professor Trent Twomey, told Sky News on Tuesday that we should see an increase of supply in late-January to early February.

However, Twomey also stated that supply will continue to "be patchy" until mid-February at the earliest. Some of the delays are due to increasingly more people falling ill with COVID-19

"We are seeing supplies ramp up after Australia Day but they're not going to normalise until Valentine's Day," Twomey said to Sky News First Edition.

Much like RATs themselves, retail stock changes rapidly. Here at Finder we are updating our Where To Buy RAT kits page hourly to give you the most accurate information possible.

When it comes to online ordering, you're looking at pre-orders and wait times pretty much across the board. And as we have seen over the last week, order and delivery times are consistently being pushed back.

For example, Hi Craft has a wide selection of tests available to order, with delivery starting from 31 January as of a few days ago. Now it is stating 3-4 weeks wait time on delivery.

Kogan's stocks have also been flogged, but at the time of writing it will let you order a 20-pack of saliva rapid antigen tests. However, delivery won't start until February 22. Previously it was February 15. of 5-packs and a 20-pack, with delivery starting from 15 February.

COVIDtestonline has been selling up to 4 types of packs, and at the time of writing states that shipping will be in 6-10 days. But that could change.

In the meantime, you can try monitoring Find A Rat, calling your local pharmacies or keeping an eye on our Where To Buy page. We also have a guide on who has the fastest rapid antigen test delivery times.

You can learn more about covid testing in Australia here.

This is the current state of play for rapid antigen test availability in Australia. We are updating this table hourly to give an accurate snapshot of stock levels. Note that delivery times are currently longer than average due to high demand.

Where to buy rapid antigen testing kits in Australia

If you're not symptomatic, another option is to purchase a rapid antigen test in store. You can use the Find a Rat website to find your nearest local seller.

Need to find a rapid antigen test? Our guide to online stores is updated every hour with current stock availability.