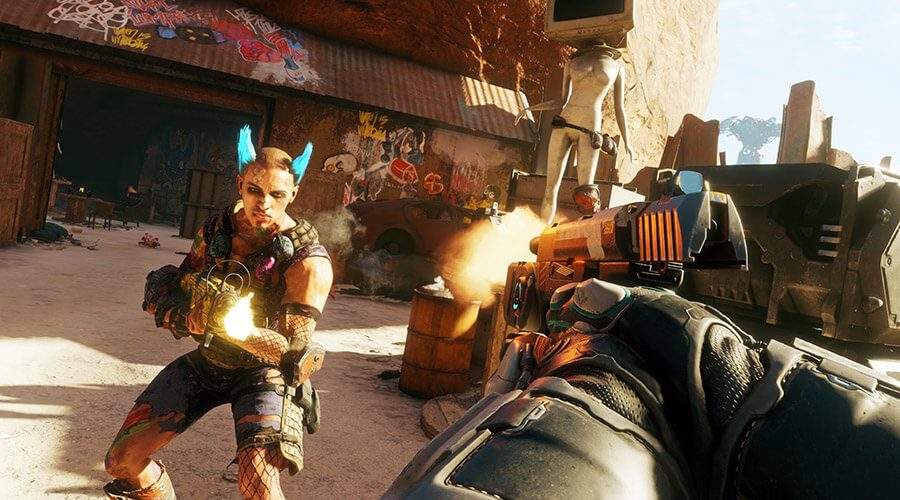 Shiny and chrome but short and confused

What is Rage 2? If you're talking formula, it's Doom guy on psychotropics (with a male/female voice of your choosing) doing the Far Cry thing in a post-apocalyptic open-world. Fantastic gunplay meets a derivative plot and a potty-mouthed hero who'd honestly be cooler if they spent less time yapping.

If you're talking historically, Rage 2 is the sequel of an id software game that was, despite its marketing, not “all the rage” when it released in 2011. It was heavily delayed and only kinda decent. I remember it as a curious fusion of textbook id first-person shooting, a smattering of lite RPG elements and track racing inspired by the genre darlings of the day (think: Burnout and MotorStorm). Rage has been patched into reasonable form today, but at launch it was a minefield of bugs and blurry, slow loading “MegaTextures”.

Fast forward 8 years (and 30 in-game years too) and Avalanche Studios has picked up the Rage mantle from id. The pitch for the sequel is more or less the same: you're to blast muties and bandits into chunky kibbles as the unisexually named Walker, a Ranger in a fandangle combat suit. The personal improvement mechanics return, as does the iconic Wingstick weapon (multi-blade boomerang) and vehicular combat. The latter is less DeathRace 2000 arenas this time and more of a sandbox conveyance that supports gyrocopters, trucks and other oddities.

Let's get the story out of the way quickly, because developer Avalanche Software sure does as well. Even on Nightmare difficulty you can get through the main thread in eight hours or less. If you're shooting for 100% completion this can be padded out to 15 or so, but even then that's an incredibly anorexic runtime for an open-world game in 2019. In comparison, recent titles like Days Gone, Far Cry New Dawn and The Division 2 gave us a good 30+ hours apiece – and that's main quest only.

Walker's tale comes and goes in terms of memorability too. It's a simple revenge/liberation tale that pits you against a marauding Authority army led by the cybernetic cliché known as General Cross. He's cross with the world, generally speaking, and it's up to your nano-enhanced self to unite three warring survivor factions into eradicating him and his ilk. Also, up for a boomsticking: sewer-dwelling freaks and Warboy/girl types who are keen to “witness” one another by harassing you with roadblocks and convoy attacks.

The good news is that the transition from corridor shooting to wide open plains happens seamlessly and is handled with aplomb via the Apex engine instead of idTech. It's just a shame that these vast horizons are so bereft of structured quests. This world is equal parts a wasteland and a land wasted by the mission designers. 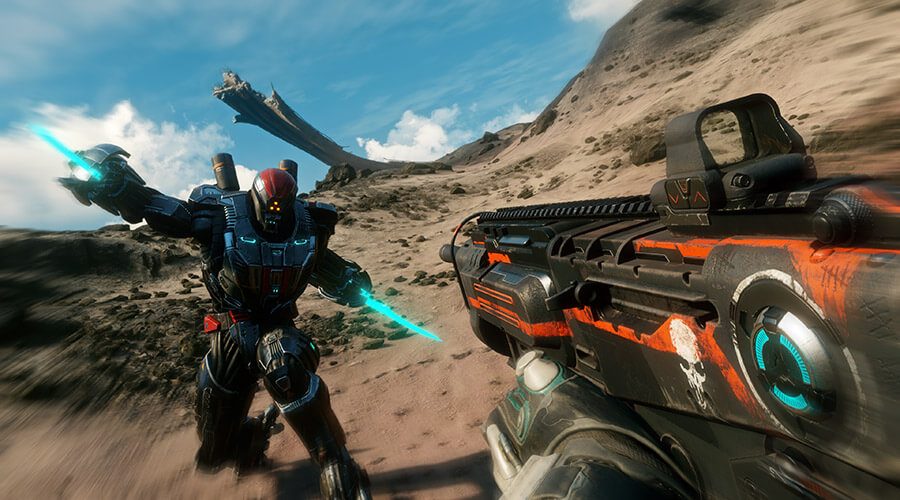 Be that as it may, Rage 2 is still a looker and moves at a blistering pace, thanks to an adoption of player locomotion that immediately puts one in the mind of Doom (2016). Pleasingly, a lot of the enemies barrel along at higher speeds as well. Mutants have a nasty predilection for wall-running, juking laterally as they charge in, and winging them can cause them to dodge away from your reticle. They're only really dangerous when they swarm you. On anything less than Nightmare difficulty, Rage 2 is a power fantasy and Walker is an angel of death.

You can attribute this to some chunky weapons, not to mention some fancy suit upgrades. Walker can level up and enhance skills like Shatter (Force push), Grav Jump (best augmented with a ground punch), Defibrillation (shrug off death) and Barrier (do the Neo “bullet block” party trick). I also got a kick out of using Rush (a super sprint that can be made to include optical camo), Dash (lateral burst dodges) and the all-important Overdrive. It's more or less Quake's beloved Quad Damage power-up. The best way to meat new friends.

Likewise, the gats in Rage 2's rack can be steadily improved in potency as you bump them up to Level 5 with collectibles (called Feltrite). Avalanche continues to champion id's love affair with bullet-guzzling assault rifles and punchy shotguns that could be mistaken for anti-aircraft weaponry. I have to reiterate here that I really love the feel and hyper-mobility of the gunplay. In the lower dungeons, super aggressive denizens crowd you en masse and the surface dwellers have decent cover instincts as well. Brutalising them with the Hyper-Cannon, Smart Rocket Launcher, Charge Pulse Cannon and a sadistic Grav-Dart Launcher never really gets old. The inclusion of a BFG-9000 represents the red mist icing on the cake (but locking it behind a Deluxe edition paywall was a crummy move). 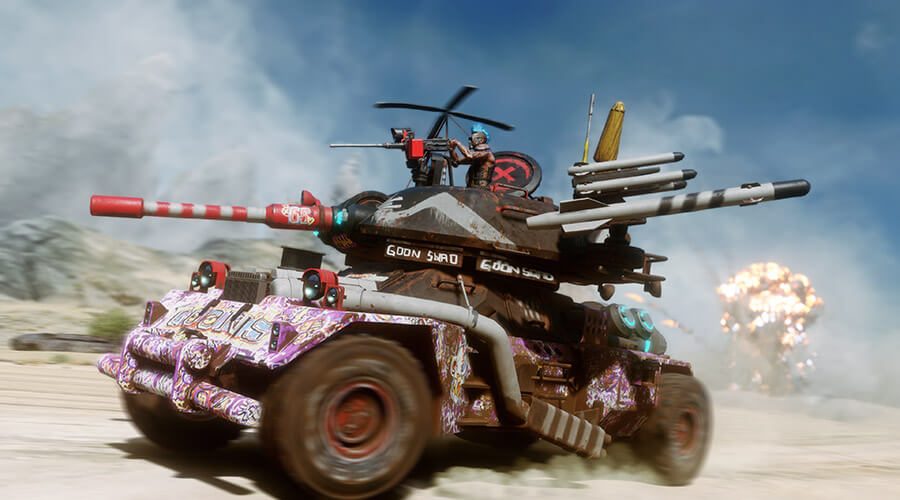 I'm less enthused about the means of conveyance in this world. Your first ride, the turret-equipped Phoenix buggy, needs a lot of upgrades before it becomes preferable to simply hopping out to swap lead on foot. Speed freaks and explorers will want to swap it out for the Raptor bike and low-flying Icarus drone, respectively. Personally, I gravitated to hi-tech tanks or the wonderfully weird “bitsa” construction vehicles that have been repurposed to Immortan Joe specifications. You can tinker with these yourself by bolting on gatling guns, cannons and defensive upgrades. That said, and much like the original Rage, vehicles feel tacked on to this experience.

When the last round gets pumped into the big bad, Rage 2 will leave you feeling as empty and hollow as your gun chamber. The genuinely well-crafted action on offer simply isn't enough to prop up what is a painfully short ride set in a world that shrieks wannabe sass but delivers very little substance. You're staring down the barrel at an underdeveloped narrative and a sandbox with massive, weirdly under-utilised regions.

This was rushed, and I dare say a lot of Avalanche's original vision is now laying on a cutting room floor somewhere. That being said, while Rage 2's marketing talks a big punk game, the boldest thing it ever attempts is to weave micro-transactions into a game that's obviously been scavenged for content during development. That's ballsy. It also represents strike number three for most folks.

Hits the ground auto-running with shades of Doom (2016) but ends up being as disappointing as it is dystopian. Expect a short blast through a world devoid of society, law and, weirdly, purpose.