Tesla stock up 22 percent in a week: Here’s why 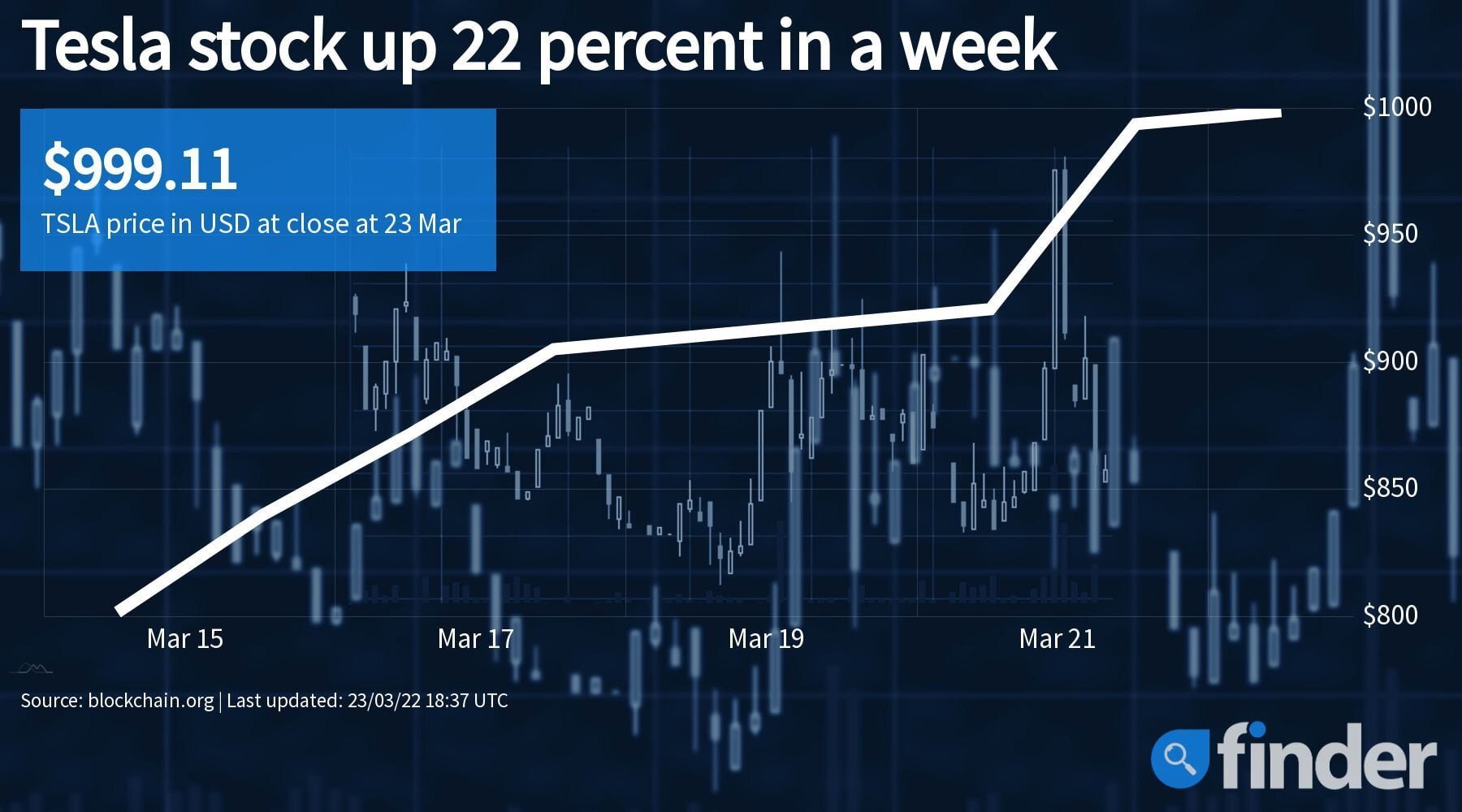 After a steep decline, the launch of a new European factory has helped drive Tesla stock higher. Is it too late to buy on the dip?

Shares of Tesla are up 3% today and more than 22% over the past week. Prior to this latest rally, the stock was down nearly 44% from its 52-week high of US$1,243.49. If you believe in Tesla's future, that was an attractive price. But the dip in price is disappearing.

Tesla will be looking at its new European factory to help ease some strain from its other factories in the US and China, as global supply chain, transportation and various other
manufacturing challenges continue to limit the company's ability to run its factories at full capacity.

The company has for months been awaiting approval for a license to begin production at the Berlin EV factory and adjacent battery plant in Gruenheide. Tesla finally got the green light earlier this month.

The factory was constructed in a little over two years. Tesla CEO Elon Musk announced the plans to build the new plant while in Germany in November 2019, and the project began in February 2020.

But the EV maker faced several layers of red tape as it sought final approval to begin production of its Model Y vehicles and battery cells. Legal action brought on by environmental groups threatened the construction process. In October 2021, local authorities insisted that a public hearing that was completed weeks earlier be repeated, derailing Musk's plans to start production by year's end.

Tesla finally won conditional approval from local officials earlier this month, but still had to prove that it fulfilled numerous conditions, including in water use and air pollution control, Reuters reported.

Tesla officially began making cars at its new US$7 billion Berlin plant on Tuesday. Musk commemorated the first vehicles rolling off the assembly line with a celebratory dance and later tweeted his thanks to Germany.

With this new plant, Tesla will now be operating out of five facilities. Three in the United States — California, Texas and New York — one in China and this newest plant in Germany. Its New York gigafactory is focused solely on producing its solar panels and solar cells rather than EVs.

Sales of EVs hit 6.6 million in 2021, more than tripling their market share from just two years earlier, according to the International Energy Agency.

Tesla dominates the EV market, accounting for 66.3% of new EV registrations in 2021, according to Experian data.

In the US, policy makers are targeting a 50% US sales share by 2030, in an effort to transition to a zero-emission future. And most major automakers have already announced plans and investments to electrify their vehicle fleets. General Motors (GM), for instance, plans to shift its entire new fleet to EVs by 2035.

While EVs still account for a small slice of the total market, the shift to electric is speeding up. Competition is increasing, more affordable options are coming to market and today's gas prices, which are up nearly 50% compared to last year, could help accelerate the broader transition to EVs.

What does Tesla's new plant mean for investors?

Tesla's stock peaked at US$1,243.49 in November 2021 but fell along with the broader market over the past four months, dropping below US$800 as recently as last week.

For a 5-year view of the performance of this stock, see the graph in our dedicated guide.

Some of the recent downturn is likely attributable to the impact of continuing supply chain issues on Tesla's EV rollouts, which have limited the company's ability to run its factories at full capacity. Musk also said in January that the ongoing chip shortage would stop the company from rolling out any new models in 2022.

Despite these constraints, Tesla leadership believes they can achieve vehicle volume growth at or above 50% in 2022.

Tesla CFO Zach Kirkhorn said during an earnings call with investors in January that this is likely achievable with just their Fremont and Shanghai factories, but that the Berlin plant will play an important part to ensure that the company is prepared once limitations ease, enabling them to increase total output more quickly in the future.

For investors who think Musk can keep this company growing past this downturn, the pullback in the stock price certainly looks like a buying opportunity. But with the stock just shy of US$1,000 – it closed today at US$999.11 – bargain hunters might need to move fast.

At the time of publication, Matt Miczulski owned shares of TSLA.