Trying to choose between Qantas and Singapore Airlines? Read this.

Qantas and Singapore Airlines are two of the most dominant international airlines servicing Australia. With bases in every major Australian airport and regular flights to the world’s top destinations, they are both trusted by thousands of Aussies every day.

So which one should you fly with? We’ve compared everything from baggage allowances to in-flight entertainment to help you decide which airline best suits your needs.

To work out which airline has the lowest prices, we searched for the same flight on the same date with both Qantas and Singapore Airlines.

Qantas offered two fare types within the economy class, Saver and Flex, with the Sale category unavailable for this flight.

Check out the screenshots below: 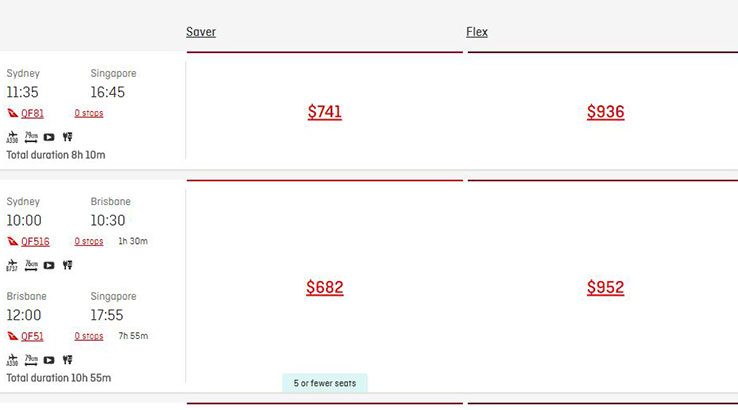 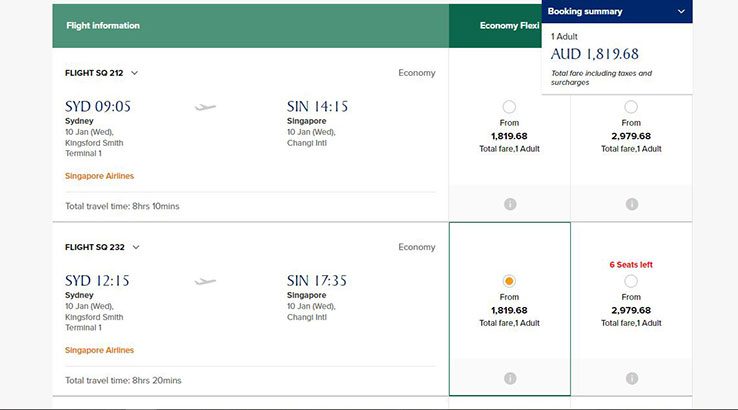 Is it a good airline to fly with?

Qantas has a 4-star Skytrax Airline Rating, while Singapore Airlines is one of just ten airlines to be awarded a 5-star Airline Rating. Qantas' Skytrax customer rating is 7/10, with reviews giving an average of 4 stars for inflight entertainment, seat comfort, staff service and value for money, and 3 stars for food & beverages.

In comparison, Singapore Airlines has a customer rating of 8/10, and reviews give the airline an average of 4 stars in all categories.

Singapore Airlines is an Asian airline servicing the world and generally covers announcements in both English and the native language of the destination. However, if your first language is not English, chances are someone onboard will be able to communicate with you.

Like all airlines, Qantas strives to employ multilingual crew members and as an Australian-based company they tend to cater better to English-speaking travellers.

Qantas’ international flight deals tend to favour the Australian crowd, with excellent deals between Europe and Australia, with a number of domestic and rural deals also on offer.

If you’re looking for a good deal within Australia, Qantas is the way to go. However, if you’re flying internationally, both airlines have a great selection of flight deals to choose from.

Up to 50% off Qantas flights

Verified 3 days ago Expires 17 Oct 2021
Available on select flights from January – October 2022. Destinations include Darwin, Cairns and Townsville.
Get deal

Expires 25 Oct 2021
Available on flights from February - May 2022. Sample fare is Darwin-Phuket and Darwin-Bangkok with Singapore Airlines. Other destinations include Koh Samui.
Get deal

Expires 25 Oct 2021
Available on flights from April - June 2022. Sample fare departs from Darwin with Singapore Airlines. Other flights depart from Brisbane, Sydney and more.
Get deal

Alice Springs flights from $175 each way

Expires 19 Oct 2021
Available on flights until June 2022 departing from Melbourne, Perth, Adelaide and more. Sample fare departs from Sydney with Qantas.
Get deal

Up to 50% off Australia flights

Western Australia flights from $100 each way

Expires 31 Oct 2021
Available from August - November 2021. Destinations include Broome, Geraldton, Albany, Learmonth and more. Sample fare is Adelaide-Perth with Jetstar. Other airlines include Virgin Australia from$160, Qantas from $165 and Rex Airlines from $208.
Get deal
Was this content helpful to you?
Thank you for your feedback!