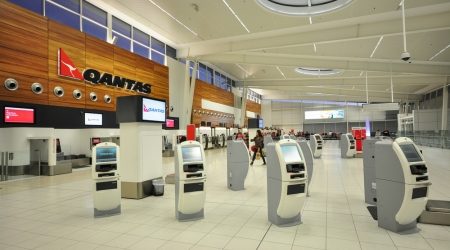 The fee switch is great news for most fliers.

So last Friday, Qantas announced that it will switch from charging a fixed fee for bookings paid by credit card to charging a percentage fee. The airline had zero choice in the matter, since the Reserve Bank requires all airlines (and any business earning more than $25 million or with more than 50 employees) to adopt that approach, which more accurately reflect the costs of processing credit cards. But forget economic theory; what does the switch mean for passengers?

The good news is that for most passengers, that means lower fees. If your domestic (or trans-Tasman) fare is $539 or less, you'll pay less than the current $7 figure. Above that, you'll pay more. At $846, the $11 cap kicks in.

$539 covers a lot of potential return flights; I've certainly done Sydney-Perth return for less. There are domestic fares that cost way more (hello Broome!), but it seems clear the majority of passengers will be better off.

International fares also benefit. Any fare under $2309 will be cheaper under the new scheme, with a sub-$30 surcharge. Above that, you will pay more. The $70 cap doesn't kick in until $5385, which is money that you'll find tough to spend for an economy fare. So peak season fares to most key Qantas international destinations might be a tad more expensive, but bargain airfare shoppers are likely to end up paying less overall.

Assuming you loathe all fees, what's the best way to dodge those surcharges altogether? If you want to use a debit card (including the Qantas Cash travel card), you'll be charged 0.6% of the value (but with the same caps). If you use BPAY, you won't be charged -- but only if you book at least seven days in advance. The only always-free options are using POLi, the bank payment system everyone forgets, or any Qantas credit you already have left lying around because of a previous flight cancellation or other compensation.

Qantas' charges are only the first round in the 2016 surcharges battle. The really interesting issue is going to be how the local bargain airlines, Jetstar and Tigerair, deal with the change. With so many top-fee business fare customers for whom $70 won't matter at all, Qantas doesn't have to stress about surcharges. For airlines like Tigerair and Jetstar, which regularly sell flights for sub-$30 prices, they may well be the only source of profit. I'll be keeping a careful eye on those. Tigerair's shift to PayPal certainly isn't the last development we'll see.