Qantas direct Perth to London: everything you need to know 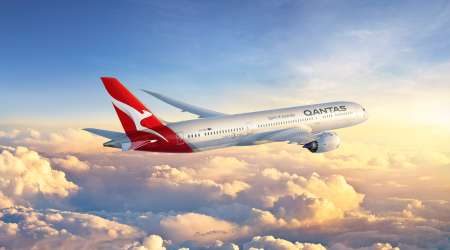 Will 17 hours non-stop on a Dreamliner be a blessing?

So what's this I hear about direct Australia-London flights?

Yes, it's happening. From March 2018, Qantas will run direct Perth-London flights, using its shiny new Boeing 787-9 aircraft, otherwise known as the Dreamliner. The 14,498-kilometre journey will take 17 hours. It's the first regularly scheduled non-stop service to run between Australia and the UK.

Would anybody really fly all the way to Perth just to fly to London? You'll still have to make a stopover, won't you?

True enough. Any current flight to the UK from Australia requires stopping somewhere; for Qantas, "somewhere" right now mostly means Dubai. Qantas says its modelling suggests many passengers will be willing to use the Perth routing from the Eastern states as an alternative. The UK is the third-most popular overseas destination for Australians.

If you've got family or business connections in Perth and can make a stopover, that adds to the appeal. But with westbound flights from the east coast taking 5 hours, there's not a big difference in total flight time to Britain once you add in a transit in Perth; you're still looking at around 23 hours.

From Adelaide, which has relatively few international flights, this would be a much more appealing choice. And from Perth, if London is your final destination, why not? If you're heading elsewhere in Europe on Qantas, however, flying to Dubai and using codeshare partner Emirates may still work out better.

Will you have to stuff around getting between Perth's domestic and international terminals?

No. Qantas plans to operate the flights from its domestic terminal T3/4, and will also switch its existing Perth-Singapore and Perth-Auckland flights to the same terminal. A refit of the terminal to add customs facilities is planned (a cost being shared between Qantas and the WA government, which is kicking in $14 million). By 2025, Qantas plans to run all its flights in Perth from the newly revamped T1.

Isn't it weird to be operating international flights from a domestic terminal?

It's unusual, but not totally unprecedented. Adelaide is the other major Australian airport with a combined domestic/international terminal; customers use the same check-in and lounge facilities, then pass through customs and duty free prior to boarding at a separated gate. That's also the case in Darwin, the Gold Coast and the Sunshine Coast.

What time will the flights operate?

Qantas hasn't said yet (seats won't go on sale until April 2017). The smart money is on an afternoon/early evening departure from Perth, which would hit the UK early morning. That would ensure passengers could transit from other states. However, availability of landing slots at a UK airport (presumably Heathrow, though Qantas hasn't actually specified that and there's an outside chance it might go with Gatwick instead) is likely to be the biggest timetable restriction.

OK, how much will tickets from London to Perth cost?

Pricing also haven't been announced. Qantas might choose to charge a premium for the non-stop flight and the newer aircraft. However, we expect the pricing will be similar to current offerings, given the level of competition on this route and the fact that Qantas expects people to fly from Melbourne or Sydney to connect to this service.

We'd guess a likely starting price point is around $1,000 each way in a sale, higher for short-notice bookings or peak seasons. Realistically, when competitors are offering return fares to Europe for under $774, going nuts with higher prices wouldn't be the most sensible business plan. There's only so much you can make up in excess baggage fees.

Will I be able to get through the 17 hours in first class luxury?

Alas, no: Qantas' Dreamliner operates three classes (business, premium economy and economy) across 236 seats. If you want first-class, you'll have to choose a different route that (most likely) uses an A380.

Will Qantas offer in-flight Internet on the service?

Nothing official, but we'd certainly hope so eventually. 17 hours is a long time in the air.

I seem to remember Qantas cut back on flights to Europe when it partnered with Emirates. Does this mean there will now be more choices?

Not necessarily. One rumour suggests that Qantas might cut its existing Melbourne-Dubai-London QF9/QF10 services, with passengers encouraged to fly to another Australian capital or change planes elsewhere. That's not official yet, but it's certainly an interesting possibility.